Red Dead Redemption 2 The New South is the first mission in the third chapter of the video game developed by Rockstar Studios for PlayStation 4 and Xbox One.

The New South can be triggered after Dutch’s gang relocates to Clemens Point, close to Rhodes. This mission can be quite challenging if you aim for the Gold Medal; therefore we suggest saving the game, in case you miss the medal on your first try.

Furthermore, as you probably know from our Red Dead Redemption II An American Pastoral Scene walkthrough, it’s worth stocking on ammo, tonics, and other items before playing a story mission in RDR2.

This way you’ll be better prepared for what you may encounter. Crafting all available Talismans and Trinkets is also mandatory as it will help you survive longer and boost Arthur’s stats.

Assuming you have followed our Red Dead Redemption 2 Wiki up to this point, look for Dutch at your new camp in Clemens Point.

“Arthur, Dutch and Hosea go out on a fishing trip.”

Approach Dutch by the river to begin The New South. After a short discussion with the gang leader who has a different opinion about life’s goals, keep following him across the camp. 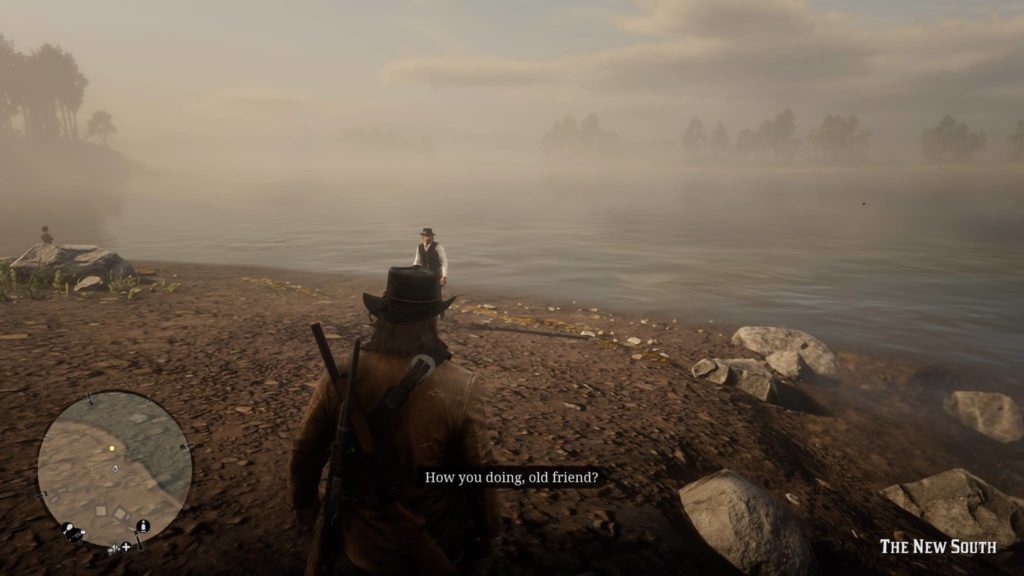 Dutch is waiting for you, Arthur

As you ride north with Hosea and Dutch, you’ll be notified that Dutch wants his gang to keep a low profile and not cause any troubles in Rhodes. This means that for this mission you are forbidden to use any weapons.

Luckily, you can still use your fists. 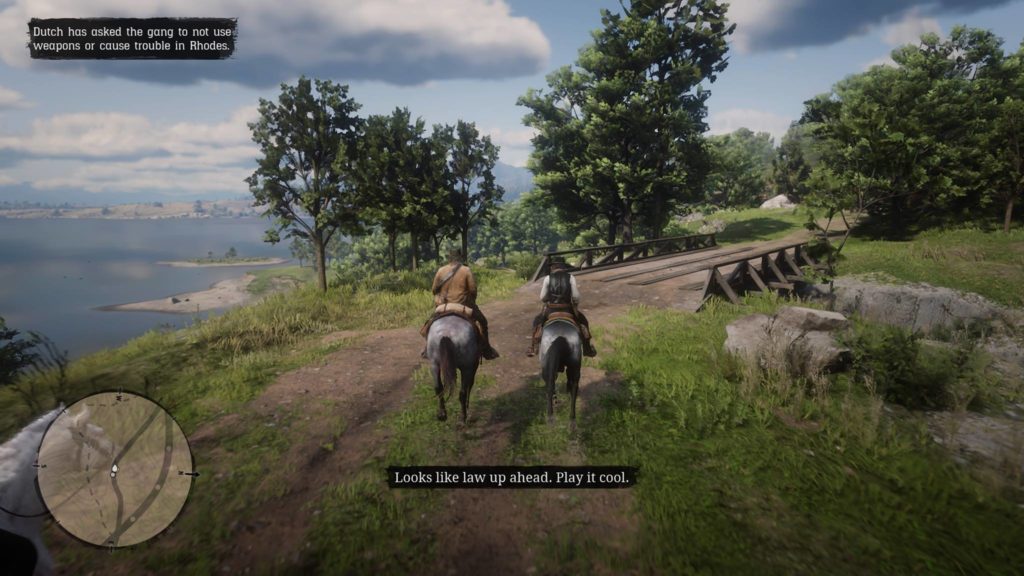 No weapons allowed, cowboy. Notice the notification in the upper left corner

Close to the train tracks you’ll catch up with a deputy’s wagon carrying some prisoners. The Anderson boys!

While Dutch interrogates the deputy about the prisoners in the cart, the Anderson boys escape on the nearby train. The moment the train is leaving, make haste and follow it. 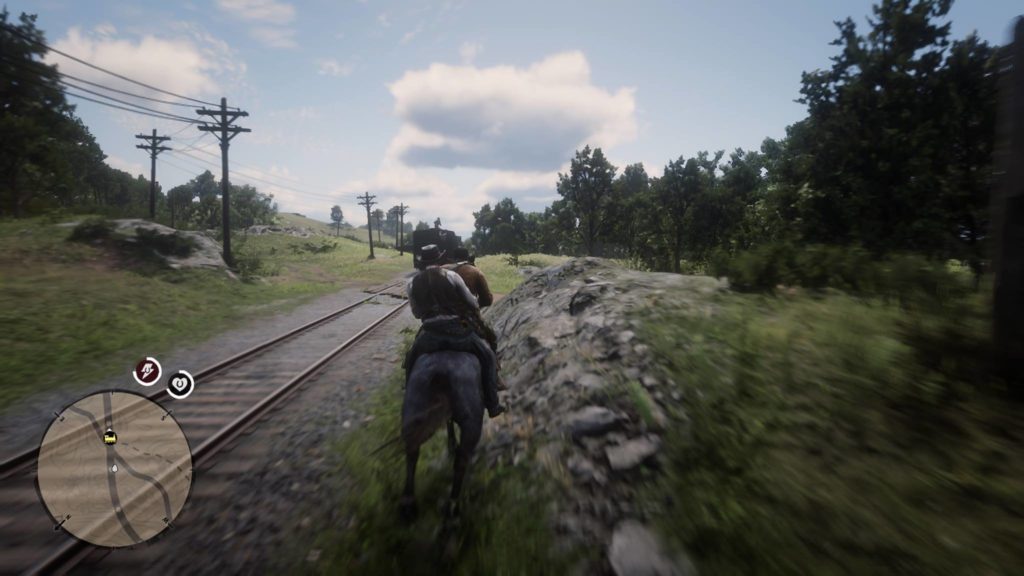 Keep up with the train!

Stay on the train tracks and when the train slows down (close to the first trains station); go around it on the right side. This sequence is quite accessible and if you keep rushing your horse you should be able to catch a carriage with the wooden crates on it.

Jump on the said carriage, and the moment one of the Andersons grapples you, start mashing O/B.

Now start chasing the next one on the train, until you reach the rooftop. The goal here is to avoid all obstacles by jumping over them,  Defeat the next Anderson on top of the train by grappling then beating him, and continue to chase Anders Anderson (pictured below). 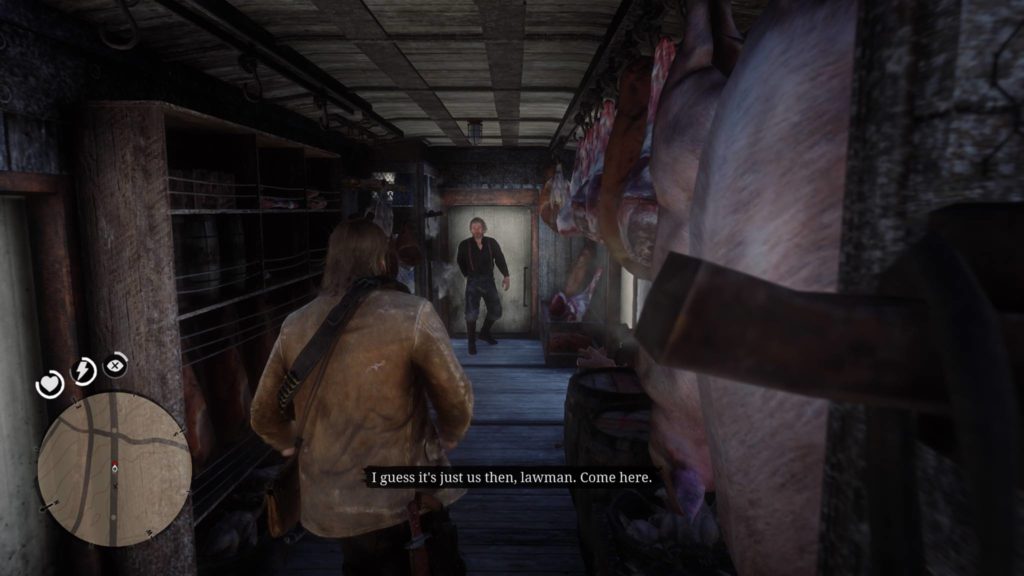 Gold Medal Goal Tip: For the following Gold Medal requirement you’ll have to knock out Anderson without taking a hit. The best method to complete this goal is to grab him (△/Y) then press the left thumbstick to slam him to the ground. Now, go behind him and when he gets up,  choke and then beat him by pressing O/B. Keep in mind that even if you block Anderson’s hits, you’ll still miss the Gold Medal.

Did you know? If Anderson hits you, you can let him kill Arthur and restart the checkpoint. This way you can practice the strategy above and get the Gold Medal without having to restart the whole mission.

Once you manage to beat Anders Anderson, pick up his body and stow him on your horse. For the next part of this Red Dead Redemption 2 mission; all you have to do is to follow the deputy back to Rhodes and drop Anderson’s body in front of the sheriff’s station. 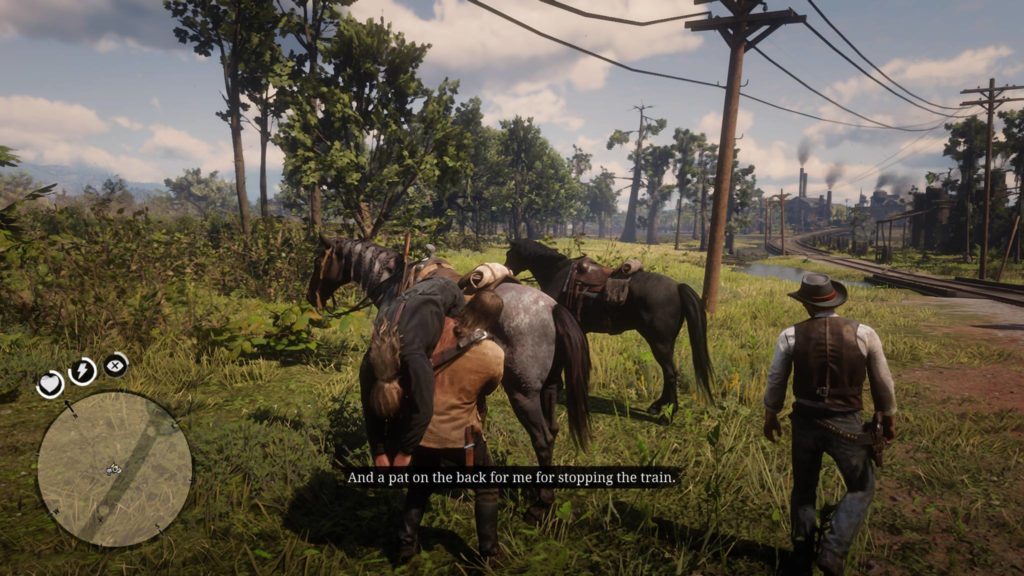 Deliver Anderson to the sheriff’s office in Rhodes

As events continue to unfold, you’ll get some hints about two rich families in Rhodes, as well as a small tour of the city.

Gold Medal Goal Tip: When Hosea asks you if you still want to go fishing, make sure you accept; otherwise the mission ends and you’ll miss the Gold Medal. Catching a fish with Dutch and Hosea is the last Gold Medal requirement and it’s quite easy to obtain; especially because you now know how to fish in Red Dead Redemption 2.

Remember that you already went fishing with Jack while playing A Fisher of Men in Chapter 2. 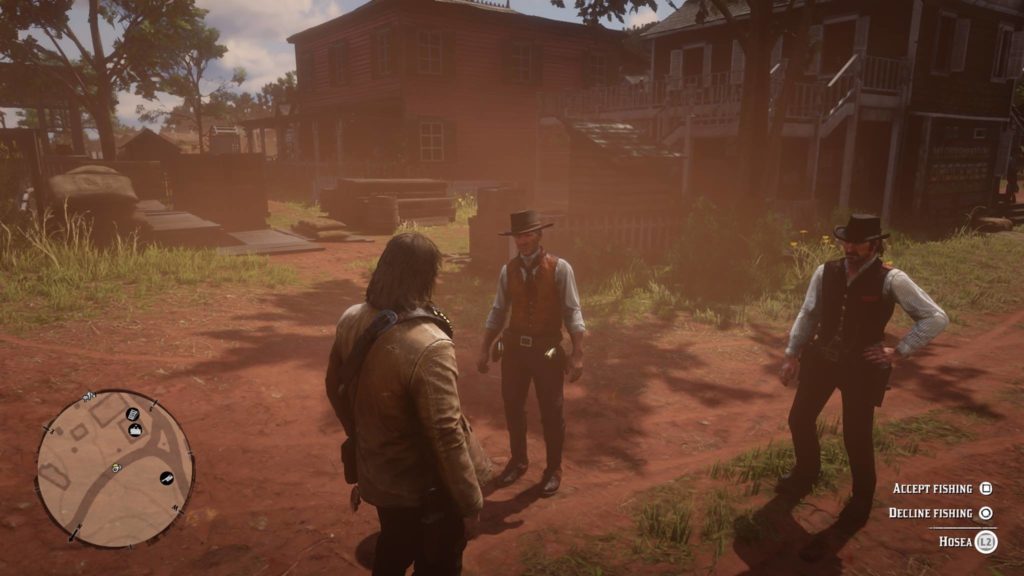 Make sure to accept Hosea’s proposal to go fishing

The road to Hosea’s fishing spot is quite long; but as long as you follow the old cowboy, you won’t encounter any difficulties; and you also have the chance to change a few words with him.

On the lake’s shore get close to the boat and row it to the marked area on your minimap. Next, pull out your fishing rod and equip the Lake Lure.

To complete the mission with a Gold Medal all you have to do is to catch one fish. Any fish will do as you can see in the picture below.

Did you know? You’ll fail the third Gold Medal objective if you don’t keep at least one fish. 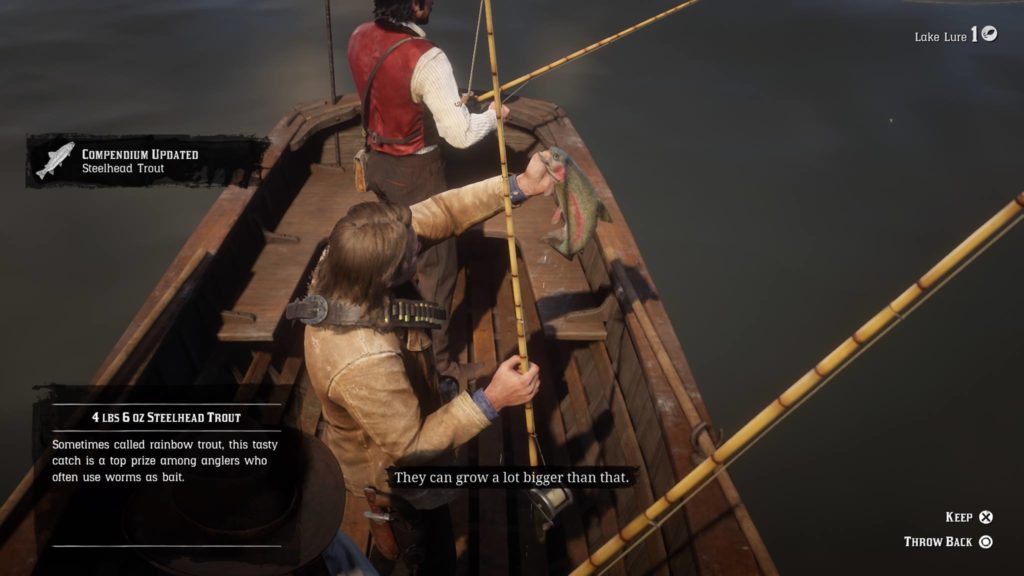 Catch at least one fish with Hosea and Dutch

When you are tired of fishing, simply unequip the fishing road and row the boat all the way back to Clemens Point. The moment you approach the docks, The New South ends.

Since this is the first mission of the third chapter, you will also unlock a series of Activities, Collectibles, and Stranger Missions. Make sure you complete all of them before starting the next story mission: Further Questions of Female Suffrage.