Ah, another day another adventure! Right cowboy? Well, this time it’s more than an adventure because we’re going to kill some O’Driscolls.

Remember when you interrogated that coward inside the barn? He told you that Colm O’Driscoll is located southwest from your location, and he wants to rob a train.

That fool…He has no idea that Dutch is coming after him. And that you, Arthur Morgan will hunt that son of a bitch down! Dutch can’t afford to have the O’Driscolls following him. They must be dealt with once and for all, and the sooner the better.

Let’s go, Arthur, it’s time to complete the third Red Dead Redemption 2 mission, named Old Friends. And, why not get that Gold Medal with the help of the walkthrough below.

“Looking for information on the O’Driscolls’ planned train job, Dutch leads the attack on their camp.”

To begin the third RDR2 mission, approach the B (Bill Williamson) marker on the map. The cutscene is triggered once you enter a small cabin where your gang gathered for a small break. And a fight. 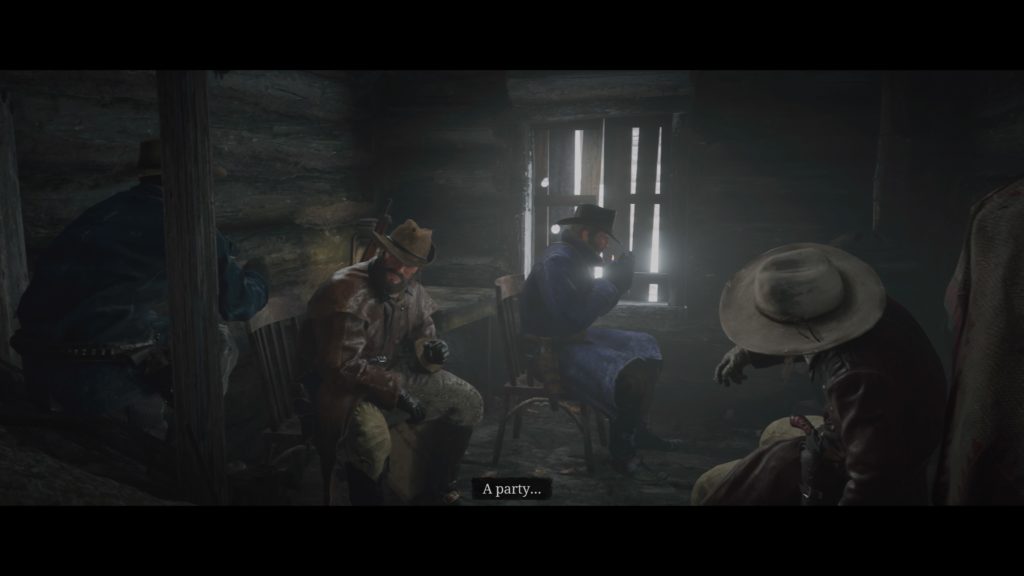 The gang needs a break

Don’t worry, Dutch will calm them down. He’s good at it.

But Dutch also wants to put an end to Colm O’Driscoll’s life. So, get the repeater and let’s ride southwest.

Follow your gang across the river to find some tracks in the snow. Stay close to them and pay attention to what Dutch has to say about Colm. It looks like there is an old fight between them, and Dutch killed Colm’s brother.

No worries though. This war is going to end sooner or later.

Look! There is smoke behind that hill! That’s the camp we have to clear.

While the others assume their positions, you Arthur, must follow Dutch. Dismount by pressing  △/Y and go after Dutch to the edge of the cliff.

Use your binoculars to scout the camp below. 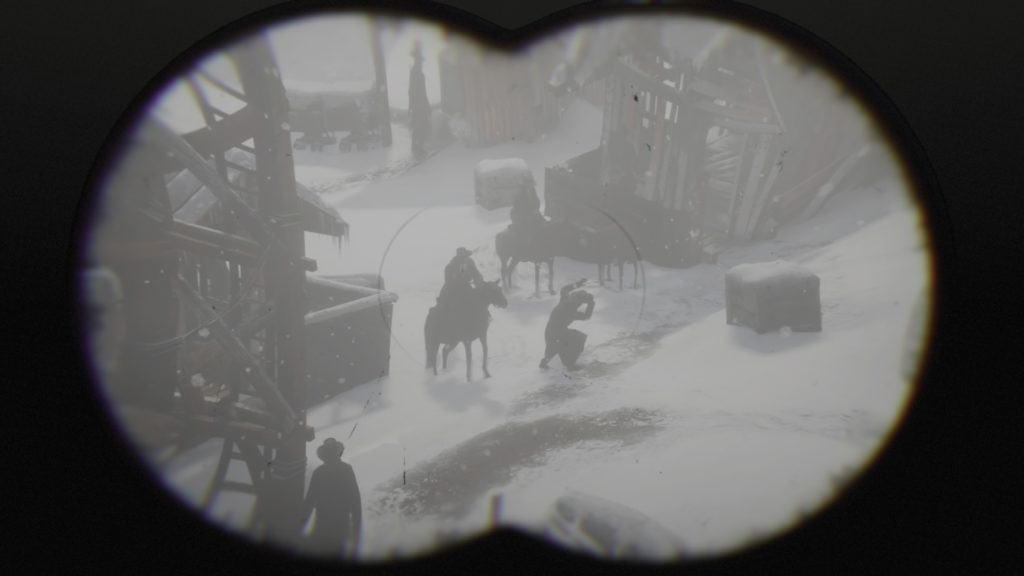 Wait, Colm is arguing with someone. What? He’s leaving? Ahh…let him go for now. You’ll get him next time. Let’s just take care of his men and grab that score. This will surely drive him crazy!

But first, go back to your horse and get the carbine repeater. Now, follow Dutch down the mountain but be careful, because the path ahead it’s a bit steep.

Once you get close to the camp, stay behind Dutch and follow his lead. Move slowly inside the camp and crouch by pressing the left thumbstick.

When Dutch asks you to take cover, press R1/RB close to his position. Next, it’s time to tell Dutch that you’ll take the lead. Hold L2/LT and inform him that he should follow you.

Gold Medal Goal Tip: Since the first Gold Medal Goal requires you to get 15 headshots, aim your rifle accordingly and take out the first enemy with a headshot. Pick the left target in the barn nearby. Remember that you can take as much damage as you want, as long as you don’t die. This means that you should take your time and focus on scoring the headshots. 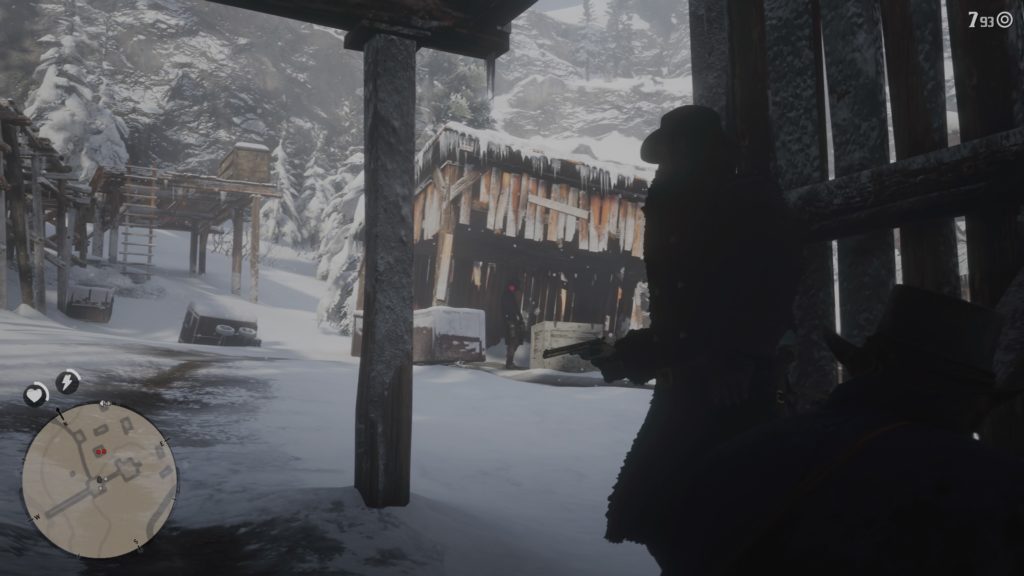 Score your first headshot on the target in the barn

After you score your first kill, focus on the enemy on top of the water tower. Now, things get really hot as a large number of O’Driscolls will appear. A good idea for scoring 15 headshots is to count them. If by any chance you are not 100% sure that you will score a headshot, don’t pull the trigger.

Stay in cover all the time and don’t leave your position because your gang members will follow and if one of them dies, you will fail the mission. Wait for Dutch to advance and you stay close to him taking cover all the time. After you clear the main camp, Dutch will tell you to loot the corpses.

Gold Goal Tip: One of the Gold Medal requirements mentions that you should not take any health items. No matter how hurt you are do not consume any health items.Approach a corpse and press triangle to loot the body. Move as fast as you can because a new group will attack you.

Gold Goal Tip: The fourth Gold Medal Goal requires you to kill three O’Driscolls in the same Dead Eye use. Notice that you don’t have to score headshots, but hey, why not combine these two goals? While aiming your pistol, press R3/R and aim for the heads of the enemies coming out from the forest, then press R2/RT to shoot.

This goal is fairly easy to complete and if you score headshots you will actually be able to combine it with the first one.

When Dutch asks Arthur if they should defend their positions or go after the O’Driscolls, pick defend because you already have the advantage and a lot o cover.

Keep taking out all enemies coming from the forest, then go to Dutch and your partners.

Now, investigate the cabin marked with yellow on your map; focusing on the large red chest in the corner. Obviously, you should grab as many loot as possible, but the dynamite is inside the said chest. 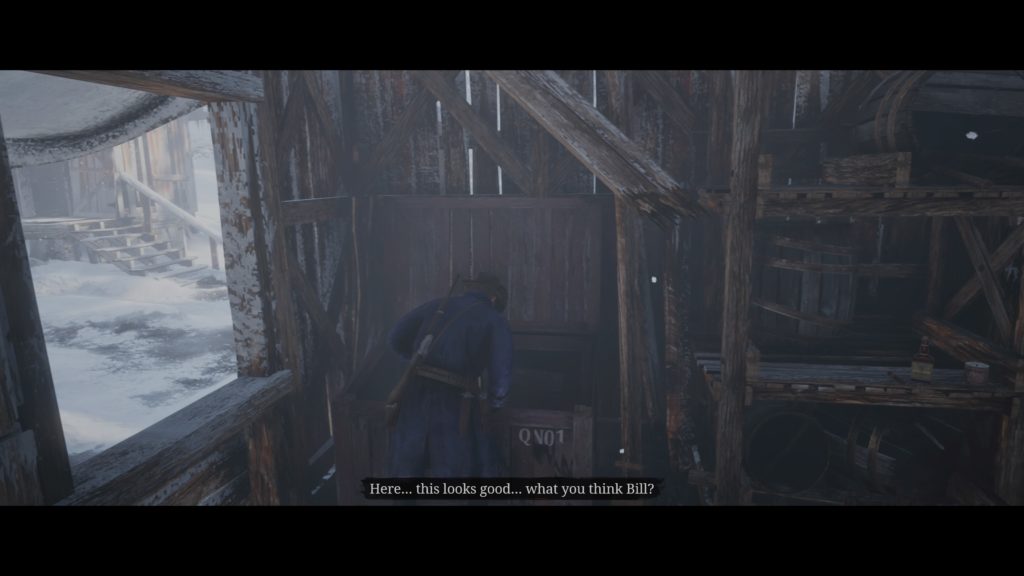 Check this crate to find the dynamite

After you find the dynamite you will trigger a very short cutscene, and you will find out what Colm is planning. A new name, Leviticus Cornwall is also mentioned, but for now, don’t worry about him.

Time to ride back Arthur. Mount your horse and follow Dutch up the mountain.

Keep listening to what your leader plans to do next, and follow him closely. Once you get close to a small river you will encounter another O’Driscoll.

The character you’ll have to catch goes by the name of Kieran, and you have to catch him alive. You’ll need a lasso for that cowboy.

Gold Goal Tip: Immediately start rushing your horse by mashing X/A, but keep an eye on his stamina bar. Cross the river paying attention to the rocks which will stop your race. Head down the river and select your lasso; then when you get close to Kieran hold L2/LT and throw the lasso. Without releasing L2, dismount and tie him up using △/Y. Next, pick him up and throw him on the horse. This goal is quite easy to complete, so you shouldn’t have any problems as long as you keep mashing △/Y.

Once you get Kieran on your horse, head back to your camp as fast as possible, by X/A and without depleting your horse’s stamina. Remember that if you hit a rock your horse will throw you from the saddle and you will lose precious time. 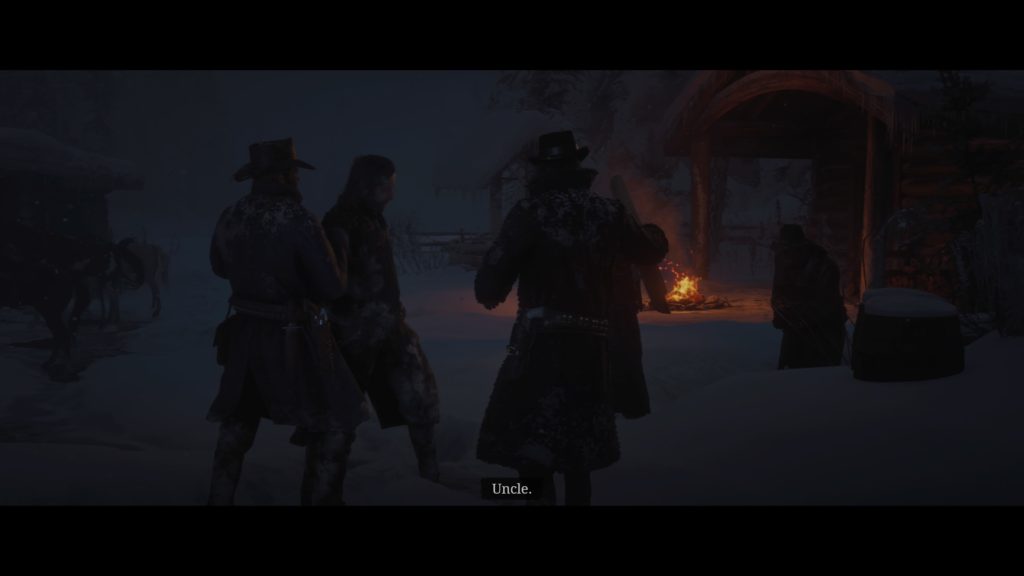 As long as you don’t waste your time at the O’Driscoll camp and you don’t get lost, 15 minutes and 30 seconds should be enough time to finish Old Friends, thus the Gold Medal will be yours.

Did you know? If you are running out of time in order to get the gold medal you can actually save some by taking the lead while riding, or by taking shortcuts when moving down the hill with Dutch. Riding faster is also a good idea to save precious time.

Great job Arthur! Hitch your horse on the post in your camp now, because Kieran must be introduced to Dutch. No worries, you have plenty of time to talk to him.

Looks like it’s late already…Let’s rest for now because tomorrow we go hunting some deer for the mission named The Aftermath of Genesis. Should you encounter any difficulties, drop us a message below or on our social media channels (Facebook, Twitter, or Instagram).