Dutch’s gang is moving slowly through the snow, trying to find shelter. Hopefully, the Pinkertons didn’t follow them. It would be a disaster. Davey is not feeling well. And no word from Arthur Morgan yet.

Wait! There he is!

He finally found a shelter. A small cabin in the woods. Nothing much, but just enough to keep Dutch’s renegades safe for one more night. It’s time to set camp, but not enough time for Davey. He died the poor son of a bitch. He is the last. No more from now on. Dutch can’t lose another man.

But there is not enough food. Nor blankets. Hopefully, Micah and John found another shelter and some provisions. Time to see what happened to them. Come, Arthur, follow Dutch!

“Half frozen, close to death and on the run, the gang finds shelter in an old abandoned mining town. Dutch, Arthur, and Micah head out to look for supplies.”

Welcome to the West Arthur! It’s time to help Dutch! People will soon die if you don’t do something. Go now! Follow Dutch, as we have plenty of time to discuss this game as you progress. Simply follow our Red Dead Redemption 2 walkthrough if you get lost, and don’t forget about the instructions below. Go now!

Move your horse using L and try to keep up with Dutch. You can hold X/A to move faster, or tap the same button.

Follow him closely and ask him additional questions by holding down L2. 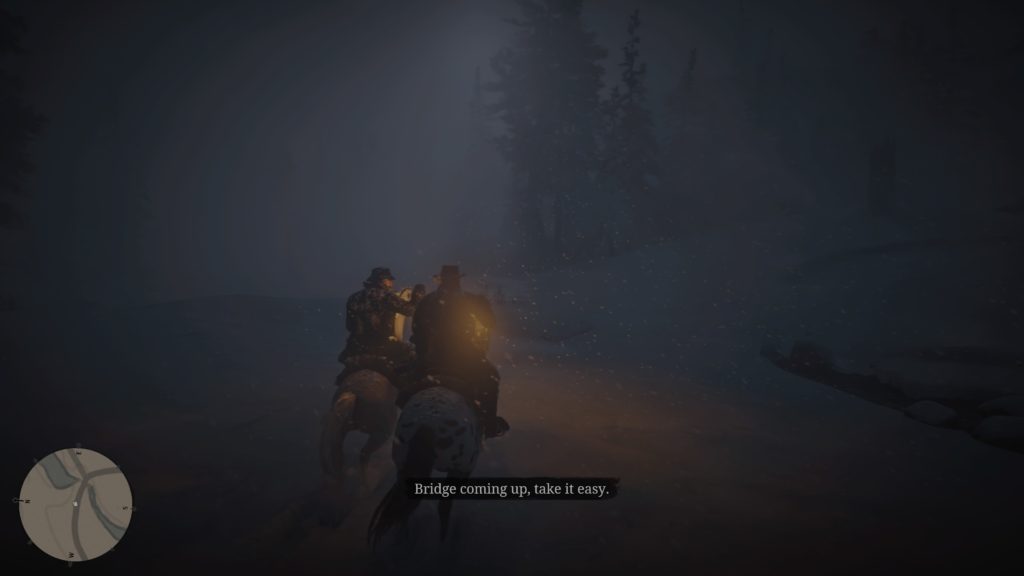 After a short ride, you will reach Micah who will inform you about a cabin nearby. Your next goal is to follow Micah and Dutch.

Again, stay close to both of them and feel free to talk to Micah.

Since both Micah and Dutch start to move faster, mash the X/A button to keep up. As you move up the mountain you find out that John is missing. Maybe he’s at the nearby cabin?

Once you get close to the cabin you’ll trigger a short cutscene, then you’ll have to turn right and follow your companions.

Move down the hill and get close to the hitching post. Hold △/Y to hitch your horse and dismount.

Next, follow Dutch’s advice and hide inside the shed on the left side while facing the cabin. 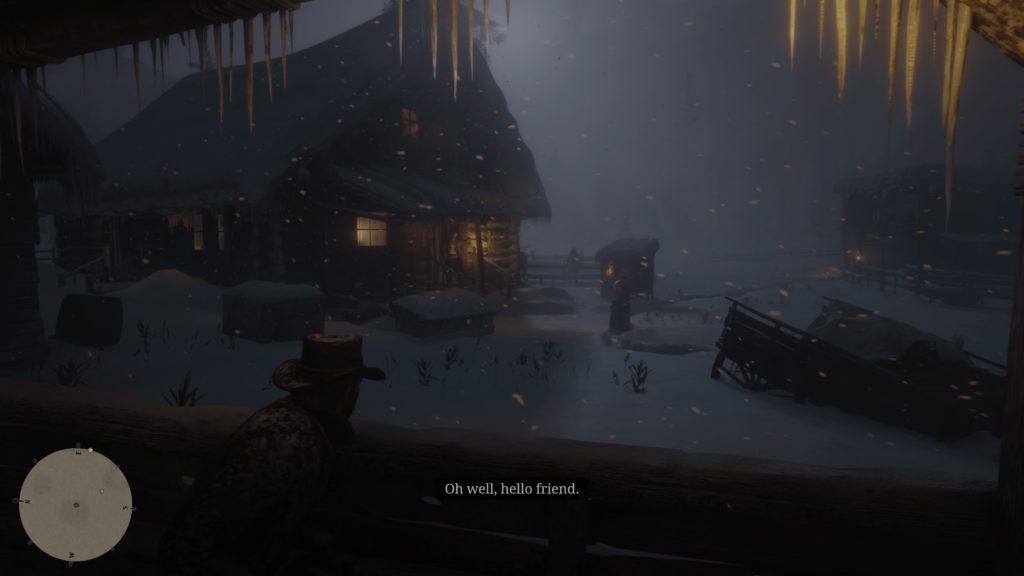 Hide inside the shed and stay alert

Pay close attention to Dutch’s dialogue with the owners of the cabin, by moving the left thumbstick up.

Now, turn right to see Micah who investigates a cart right in front of the shed.

As soon as you hear Micah telling you that there is a corpse in the cart, equip your weapon by pressing L1/LB and then selecting your gun with the right thumbstick.

Gold Medal Goal Tip: For the first Gold Medal Goal you have to make sure you don’t take any damage. To do so, keep your head down and stay in cover. Since the third Gold Medal Goal requires you to have an accuracy of at least 80%, it is a good idea to combine these two goals and take your enemies by surprise. In other words, you should be the one who opens fire. During the fight, keep an eye on the left side of the shed where Morgan is standing, as there will be an opponent who comes out from the outhouse.

The upper window of the cabin is also a spawning point and the enemy must be shut down as soon as possible because he has the high-ground advantage.

The wall of the cabin can be destroyed by enemies, thus exposing Morgan. Don’t allow them to break it.

Stay in cover all the time and only fire when it’s safe to do so. Remember that these guys don’t need more than 1 or 2 bullets if they are shot above the waist.

When Dutch tells you that one of the O’Driscoll gang members is trying to run, you can safely ignore him. Killing him will only lower your honor.

While Micah is bringing the horses close to the house it’s time for you to check the building.

Gold Medal Goal Tip: For the second Gold Medal Goal you have to loot at least 6 items from Adler Ranch. It is an accessible goal you can’t miss if you take your time and check all cabinets.

Inside you will find oatcakes, fruits, biscuits, and even a coin purse in the chest next to the bed. It only has a small amount inside, but hey…it’s free money!

Next, move to the drawer near the bed and search it for a pack of premium cigarettes and a Collectible Card which is random. 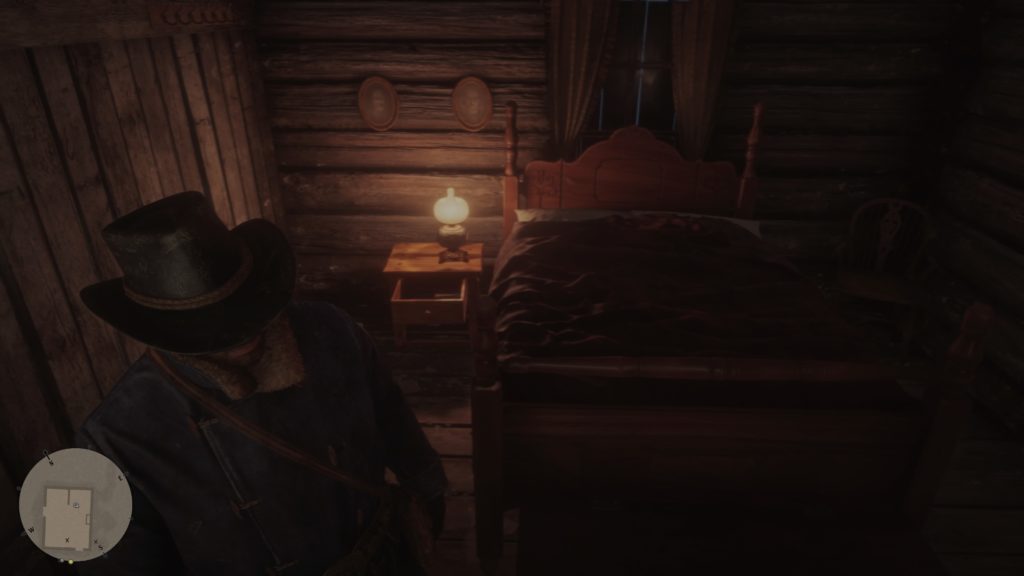 Check the cabinet next to the bed for a collectible card

Move around the ladder and search the cabinet near the window for several opened health cures. There is also meat on the table and some cartridges and more food in the cabinet upstairs. Climb the ladder and thoroughly check the upper section.

Now that we got more items that the second Gold Medal Goal requires, head outside and talk to Dutch; who will send you to check the barn.

Your next objective is quite hard to miss, and it’s on the left side as you exit the door. Simply sprint through the snow by tapping X/A and open the barn door.

Once inside you are eventually attacked by another O’Driscoll. This will trigger a fighting sequence very accessible since you only have to mash O/B.

Continue to beat the O’Driscoll until you subdue him, then start to interrogate him. No need to beat him up more as he will tell you everything he knows immediately.

You will find that Colm O’Driscoll is located at a mining camp and that he intends to rob a train. Feel free to dispatch the gang member as you wish, because there are no repercussions.

Next, pick up your hat and your gun from the ground. You should easily spot them as they are glowing.

While keeping L2/LT pulled, lead the horse outside and towards the cabin. Hitch it on the post next to the outhouse and hurry up inside the cabin where a woman is screaming.

Looks like Micah just set the cabin on fire while fighting with Sadie Adler! 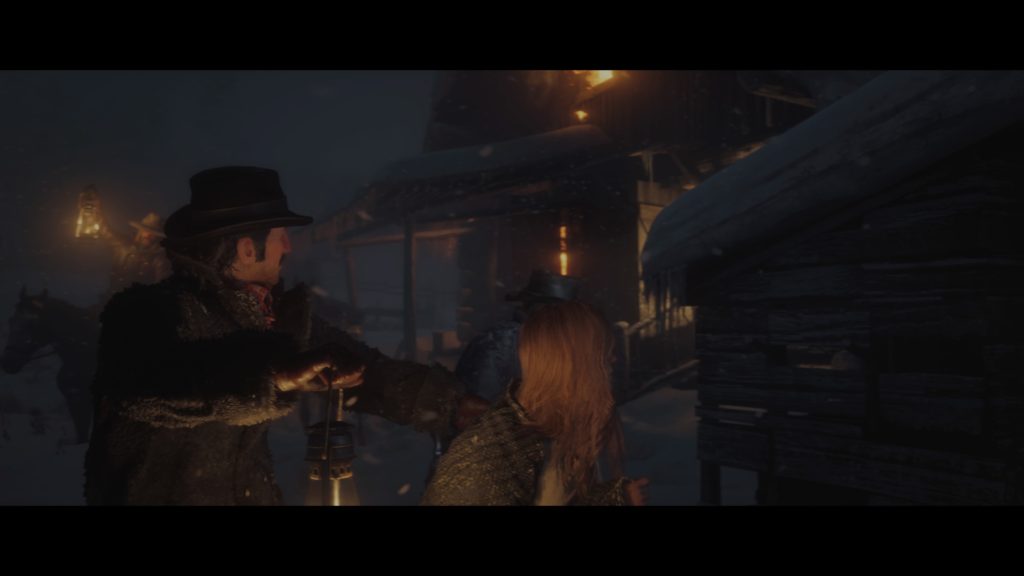 Nothing you can do to save the cabin…

As you depart with Dutch, Micah, and Sadie, you trigger the final cutscene of the first mission.

You’ve done a really good job getting all the supplies for your partners, Arthur!

Get some rest now, as tomorrow you’ll have to explore the mountains looking for John as part of the second mission of Red Dead Redemption 2, named Enter, Pursued By A Memory. While resting, why don’t you join us on Facebook, Twitter, and Instagram?