Red Dead Redemption 2 camp upgrades become available during Chapter 2 after you complete the main mission named Money Lending and Other Sins. The mission is divided into parts; however, the said upgrades are unlocked after the first part.

Assuming you want to upgrade your camp as soon as possible, you should focus on this mission the moment you finish Americans at Rest.

Ready, Arthur? Good. Open your map and find Leopold Strauss. Look for him in Horseshoe Overlook, where you should be able to see an icon showing his initials: LS.

As you can see in our picture below, Leopold Strauss wears a hat and usually, he spends his free time away from the rest, studying. Press L2/LT to focus on him, then greet him by pressing ▢/X. 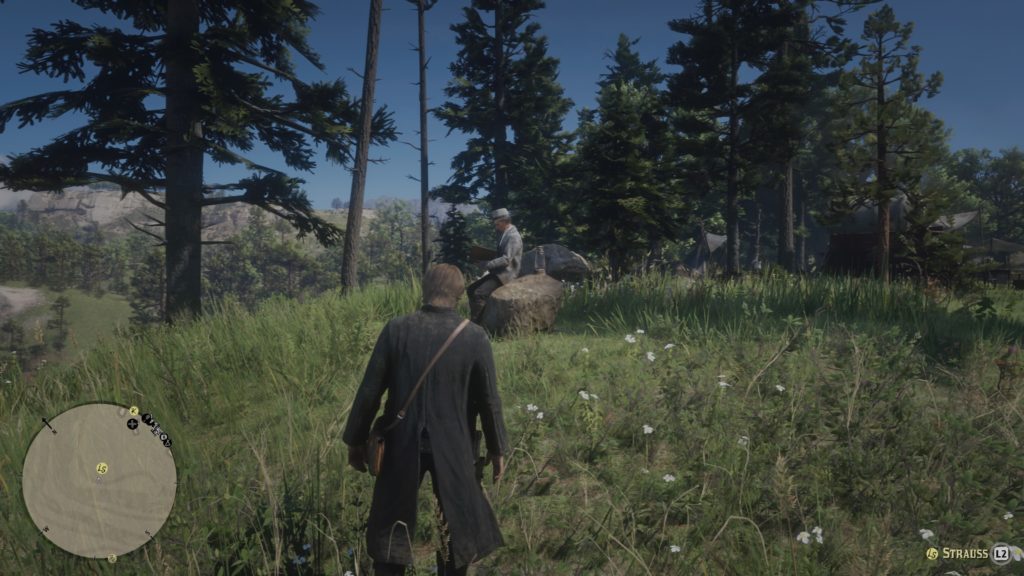 As you find out during the next cutscene Strauss borrowed some money to various people. Unfortunately, they did not pay back, so, it’s time for you cowboy to recover the money.

Inspect the List of Debtors by pressing the right button on your D-Pad. It should look like this. 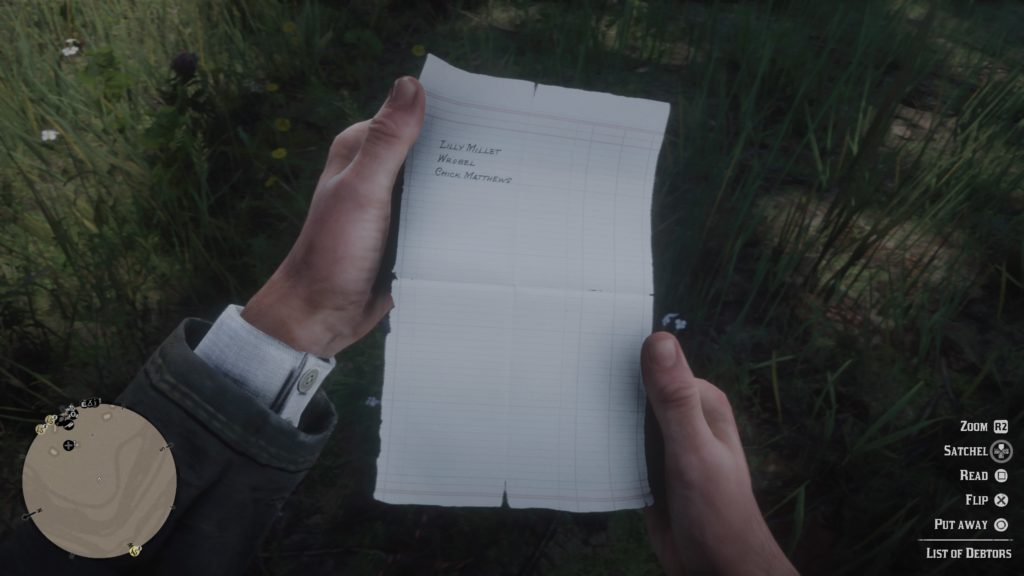 On the list, you will find three names: Lilly Millet, Wrobel, and Chick Matthews. Now, open your map and you should see three new icons. All of them show the LS icon and the $ sign next to it. Let’s approach this characters one by one.

Wrobel is the closest, so let’s pay him a visit first.

In RDR2, Mr. Wrobel can be found inside a small house, we have pictured below. Enter the house, and confront him by pulling L2/LT and then O/ B.

Wrobel doesn’t speak English,  which means you won’t be able to understand what he tries to tell you. How about aiming your weapon? Maybe he is just pretending he doesn’t understand you?

Guess what!? He learned English! Great, now teach this guy a lesson, until he tells you where the money is. Looks like you have to find them by yourself.

Inside the cabinet located in the corner of the main room, there is a silver earring. But you need more than that.

Wait…Wrobel is standing in front of a side table! Trying to protect it maybe? Move him and search the drawer for a Gold Ring. Now check the small table near the door for an antique watch. 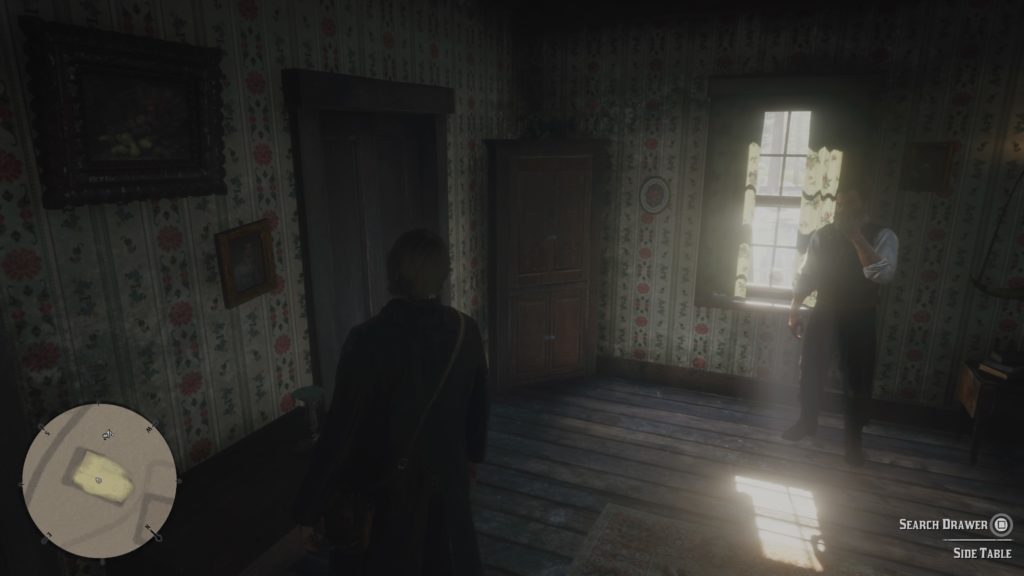 Check the side table Wrobel is trying to protect

That’s it, cowboy! That should be enough to cover Wrobel’s debt.

Exit the house, but before leaving the premise, check Wrobel’s barn. Look! It’s a Hungarian Halfbreed. Why not take it with you? It’s a beautiful steed.

Well, now that you left Wrobel without money and his horse, head to your camp and put all debts into the camp’s box. Great job! Now, feel free to check the camp’s ledger where you can buy the first set of camp upgrades.

Ready to go after the next debtor? Focus on Lilly Millet, south of Emerald Ranch.

Lilly Millet is easy to find if you know her location. As you can see below, when you reach the marked area on your map, you should look for two characters sitting on a bench and arguing. 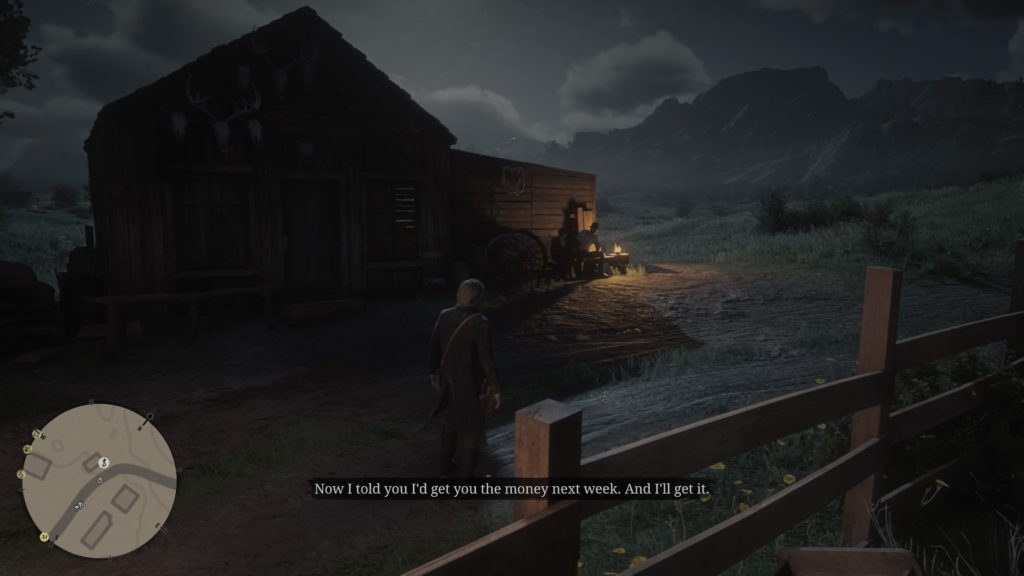 Find Lilly and Copper arguing on a bench

The woman on the bench is actually Lilly Millet. Approach her but stay alert because her friend is not very pleased to meet strangers.

Copper will engage you immediately. Remember the fight you had with Tommy? Use the same strategy, and block Cooper’s attack just before they hit you. Counter and kick his ass.

To recover the money Lilly owes to Leopold, loot Copper’s body. Hey, you can also get his hat if you like it.

If by any chance someone sees you looting Cooper, make sure you chase the witness and catch him before he reports you. If needed, beat the witness too.

Great now! Let’s pay the third debtor a visit too since he is very close to Emerald Farm.

North-west from your current location, you should spot another icon with the $ sign on it. It’s Chick Matthews and you need to recover money from him too.

Unlike the other two debtors, Chick Matthews is a little harder to find. Once you arrive at the location on your map, look for a man sitting on a tree trunk, like in the picture below. 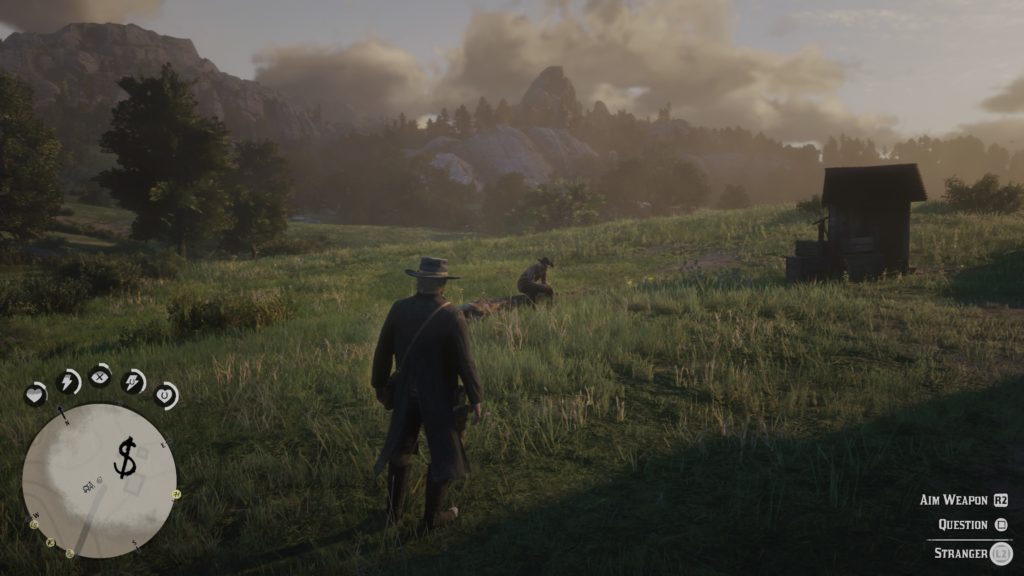 Find where Chick Matthews is by talking to this poor fellow

Question him, but stay sharp because in the background you should see Chick Matthews running away on his horse. Immediately jump on yours (preferably the Hungarian you stole from Mr. Wrobel) and chase Chick Matthews.

Cut turns to get closer to your target, then lasso him. After you stop him, he will give you a map (Chick’s Treasure Map). 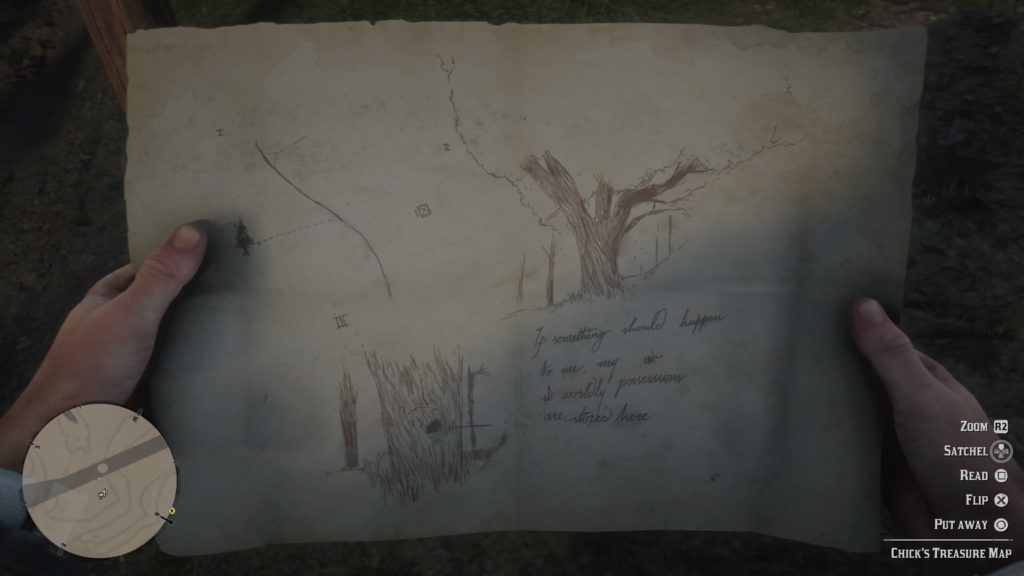 Open your satchel and examine it, noticing the hole in the tree.

Next, open your map and north-east of Heartland Overflow you will see a small icon. Head to that location and look for a tree similar to the one in the following picture. 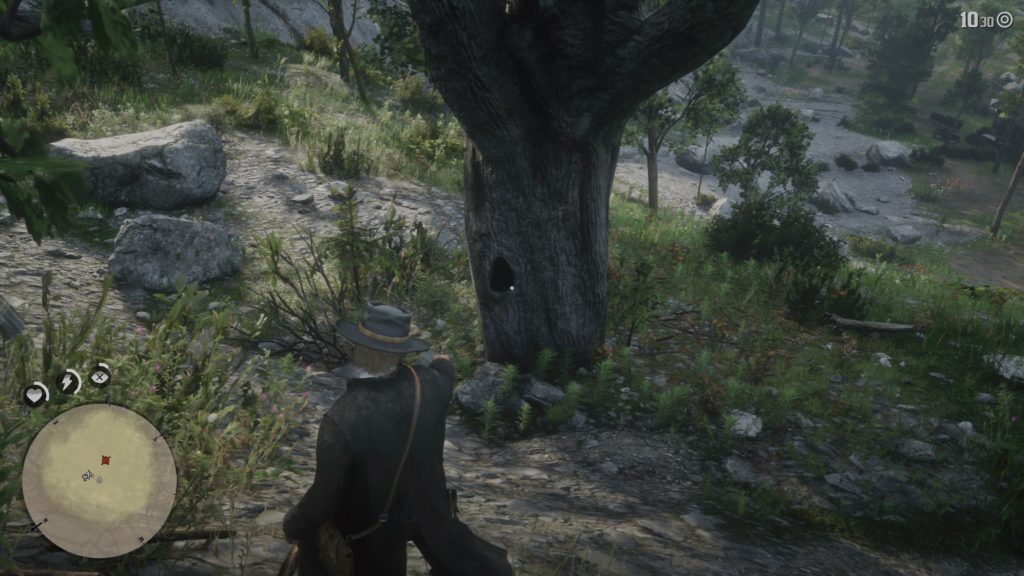 Approach it and search the hole to find Chick’s Debt Money.

Now, it’s time to return to your camp and deposit the money in the box, just like you did earlier. Make sure you spend them wisely when you purchase camp upgrades.

Did you know? Red Dead Redemption 2 Money Lending and Other Sins – I & II doesn’t feature any Gold Medal requirements, and you can complete it only by finding a single debtor, but if you find all three of them you get better rewards.

Completing this mission is the only requirement to start Money Lending and Other Sins – III. Got questions about this mission, cowboy? Drop them in the comments section below or find us on  Instagram, Facebook or Twitter.