After you complete the first mission in Chapter 2 of Red Dead Redemption 2 (Polite Society, Valentine Style) you can start one of your first Stranger Missions, Arthur.

The Noblest of Men, and a Woman is going to be quite long because you will need to find and engage a series of gunslingers.

In RDR2, The Noblest of Men, and a Woman Stranger Mission is divided into two parts; however, because we want our Red Dead Redemption 2 Wiki Guide to be as useful as possible; we will treat it as a single mission.

This way you will be able to find all gunslingers in Red Dead Redemption 2 in a single walkthrough, and you can also check their locations on a single map. 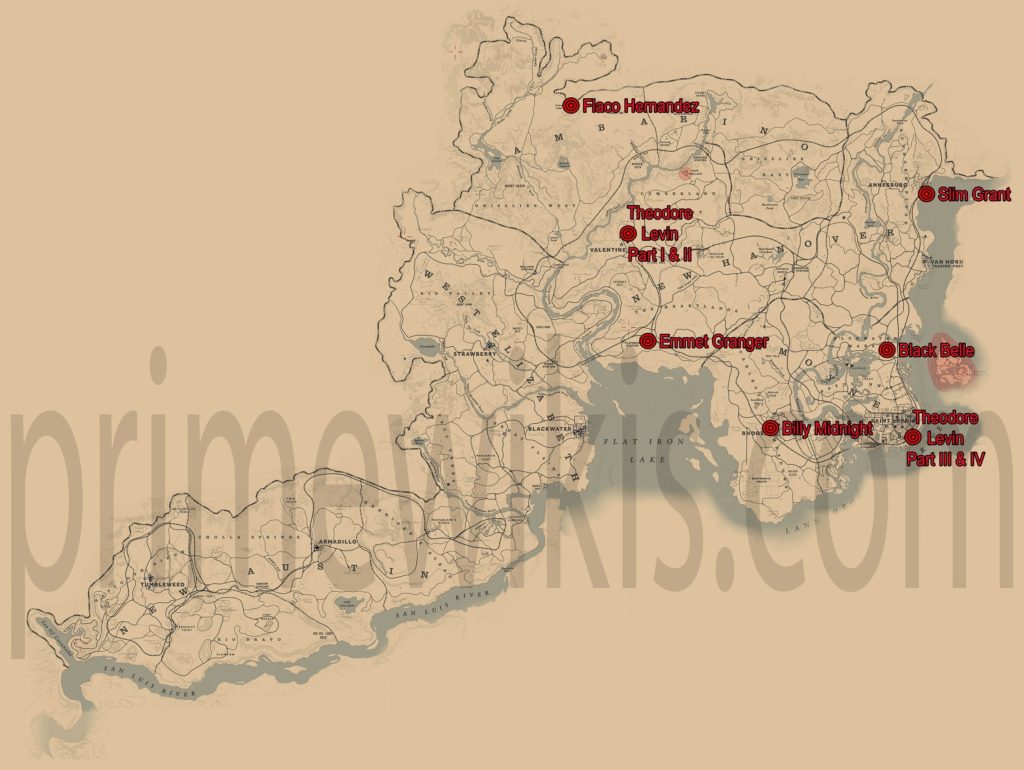 The Noblest of Men, and a Woman – I & II Walkthrough

Now, pay attention, Arthur! First of all, head to the Keane’s Saloon in Valentine. Find Theodore Levin sitting at the bar! He talks to Jim “Boy” Calloway. 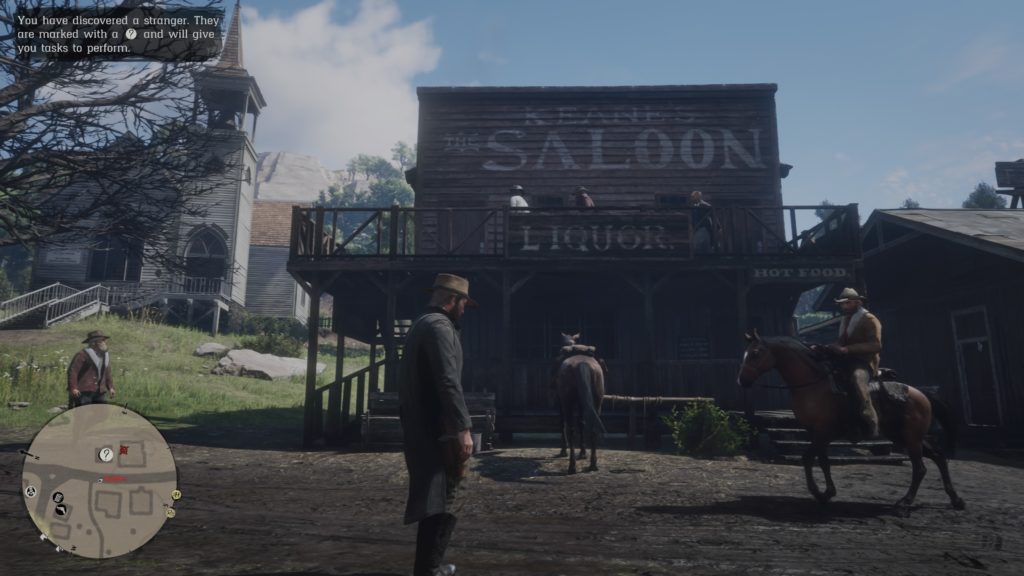 Theodore is writing a book about, well… gunslingers! Jim, unfortunately, is quite drunk and unable to talk; which means that Theodore is desperate.

He needs your help Arthur and he also needs photos. Hence you have a new camera!

Ok, so, Theodore wants you to find specific gunslingers! Just the best of the best. Make them tell you more about Jim “Boy” Calloway and take pictures of them.

To help you identify them, he gave you a series of photos. Feel free to check them out and stop at the one showing Emmet Granger. Make sure you flip it an read his biography.

When you flip a photo, the location of that gunslinger is also marked on your map. 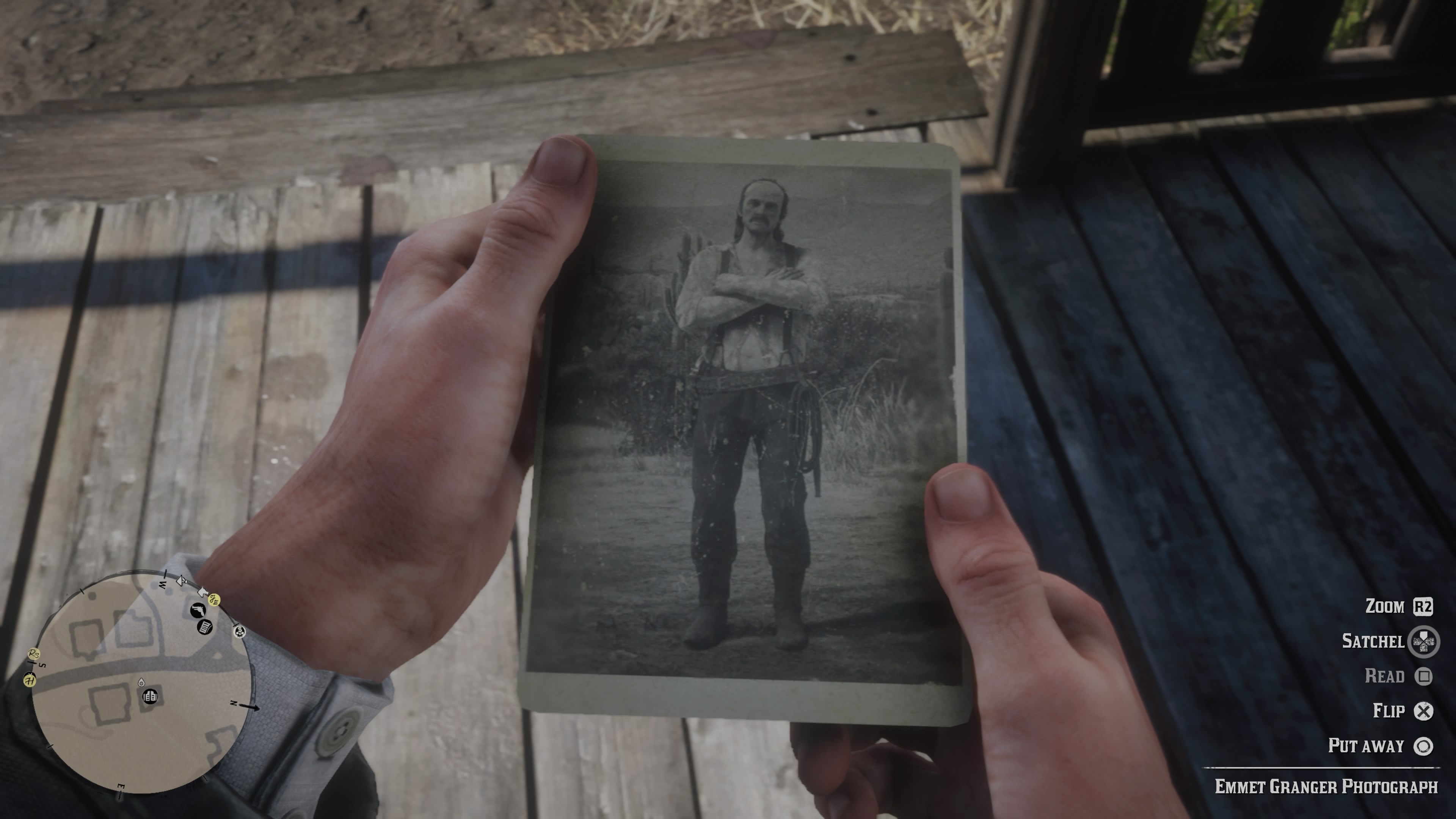 Interesting character Emmet Granger! Let’s pay him a visit, east of Flatneck Station. If you have problems finding him, check our map above.

When you get close you should be able to spot him near a pig farm. Talk to him first by pressing L2/LT.

Emmet seems to agree to tell you something about Jim, but first, you have to help him clean out the manure.

Grab the pitchfork near the fence and start cleaning, cowboy. The manure locations can be seen as little yellow dots on the minimap. And on the ground.

Each time you are close to one, pick it up then drop the manure in the wheelbarrow.

There are 4 spots you need to clean. 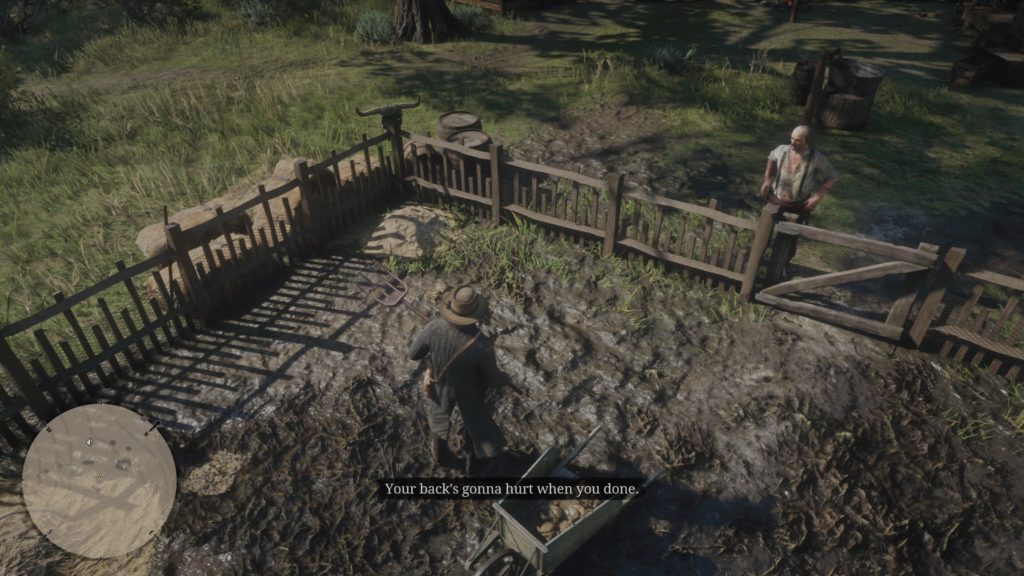 After you drop the wheelbarrow, you will have a small talk with Emmet. He is a nasty man indeed and eventually, you will start a fight. In order to make Emmet talk, you have to scare him by placing a dynamite stick on the manure store. Approach and press R2/RT. Look at that mess!

Emmet is angry now…and you will begin your first duel!

When the slow-motion sequence starts, press slowly R2/RT and adjust your aim, before fully pulling the trigger. You should have enough time, cowboy.

Great! Emmet is down; however, you should not leave the area without his gun and a picture. 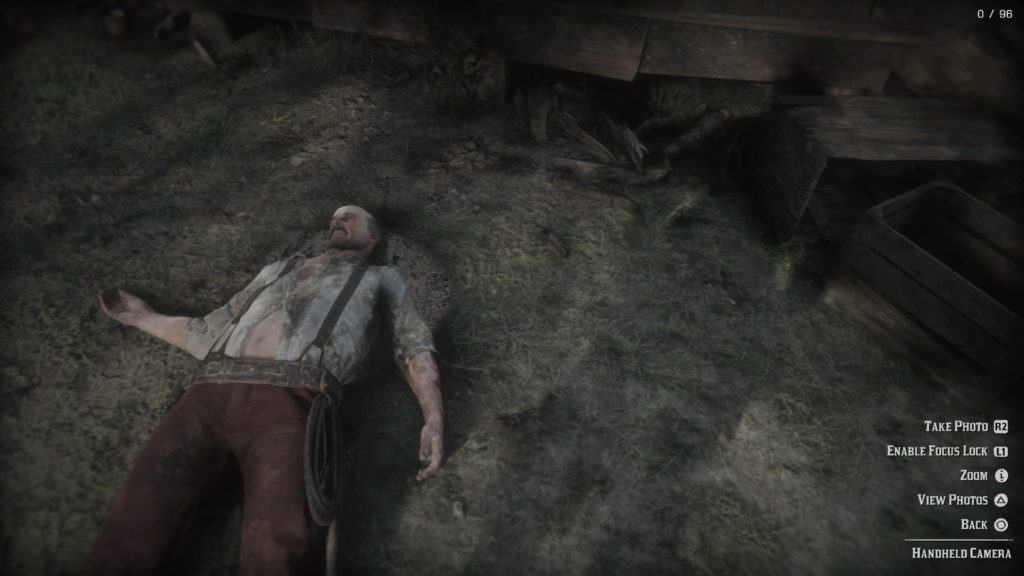 First, take a picture for Theodore. Press L1/LB, then select the camera from the Items Menu. Press L2/LT to focus on Emmet, then R2/RT! That’s it! You killed your first gunslinger!

Now, take his gun (Granger’s Revolver) from the ground. Fail to do so and you won’t be able to find it later. Finally, you can check the cabin to find a Harmonica in the cabinet behind the door. This item will help you complete a Companion Item Request for Sadie, during Chapter 3 of the video game. 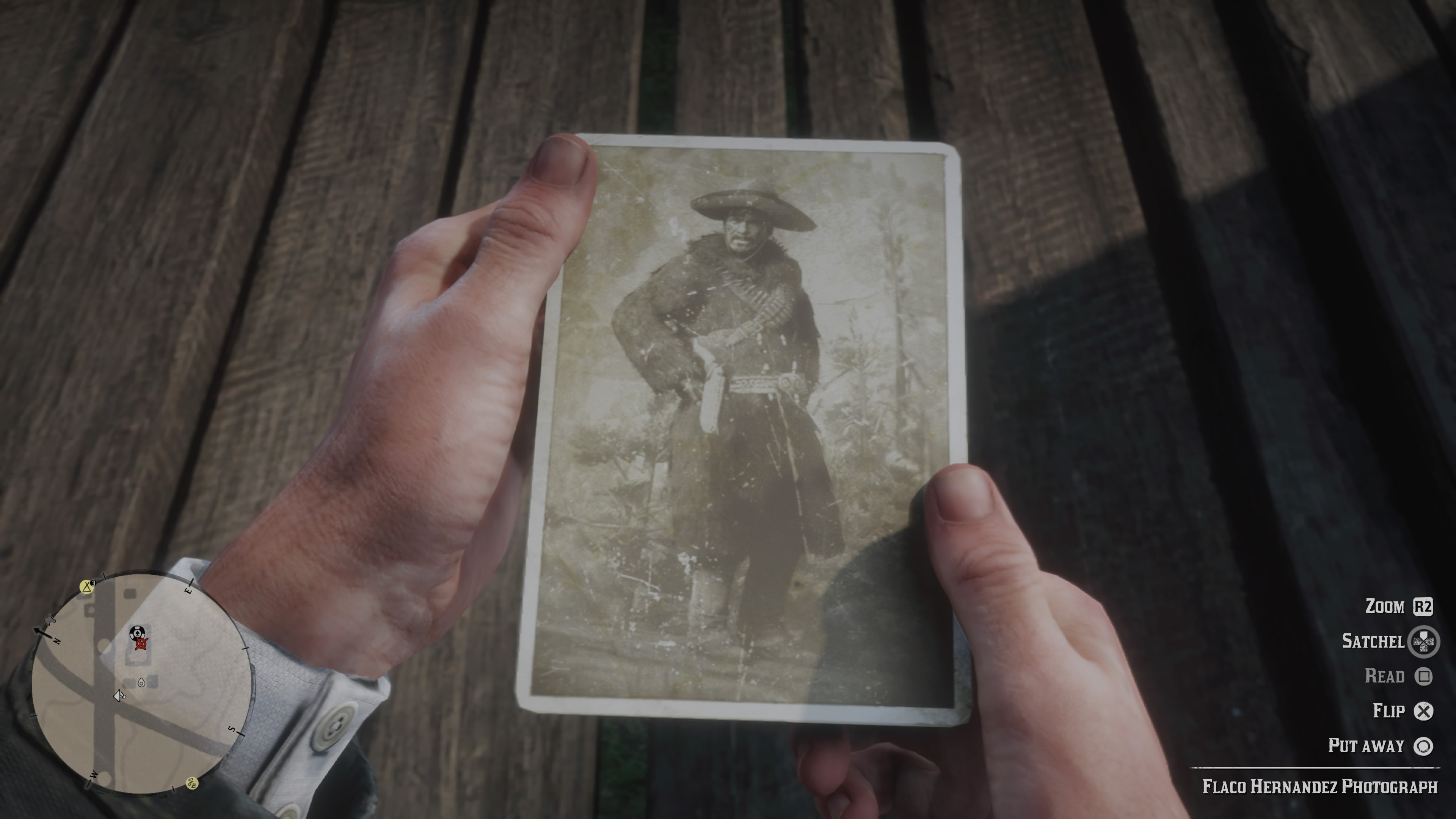 “The Terror of the Grizzlies-“

So, you’re up for another gunslinger challenge, Arthur? Great! Let’s hunt down Flaco Hernandez! He’s a bit tougher than the previous target, but he’s no match for you!

First of all, check his picture in your satchel and make sure you flip it, so you can have his location on your map. Great now!

As you can see on your map, or on ours above, this gunslinger is located up in the northern mountains. Make sure you dress correspondingly because it’s cold out there. Snow is also present. Now, ride cowboy until your reach his location.

As you approach Flaco Hernandez’s camp you will notice that he is not alone. No need to panic. Simply press L2/LT and threaten Flaco’s goons. 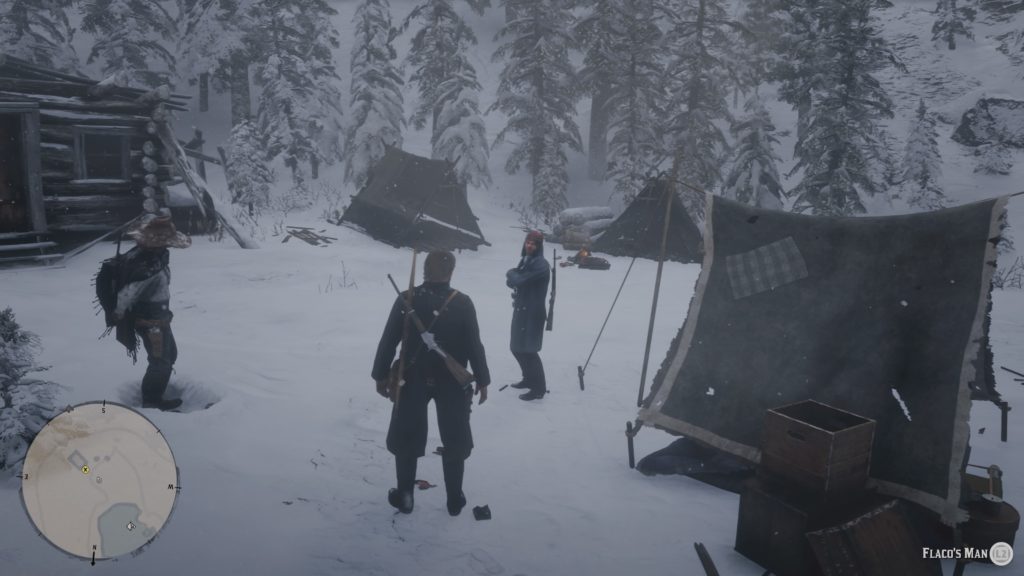 Now, head to his cabin and call him out!

Make sure you don’t pull your weapon before the duel because he will not come out. Once Flaco is out the duel begins, so slightly pull R2/RT, aim and shoot by fully pulling the trigger.

Go for a critical shot (head/heart) because if you only disarm him, he will pull the second revolver and most likely kill you. Since Flaco didn’t want to talk to you, just take his picture after you kill him.

Make sure before you leave you also grab his weapon (Flaco’s Revolver) on the ground, or you won’t find it later. 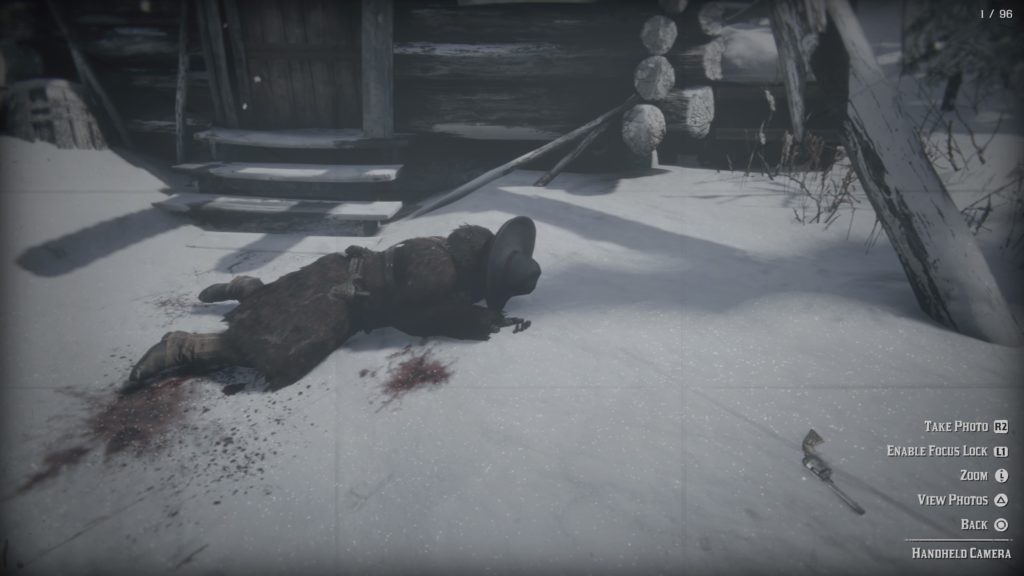 After you kill Flaco take his gun from the ground

That’s it, cowboy! The second gunslinger is down. Let’s focus on the third. Billy Midnight. 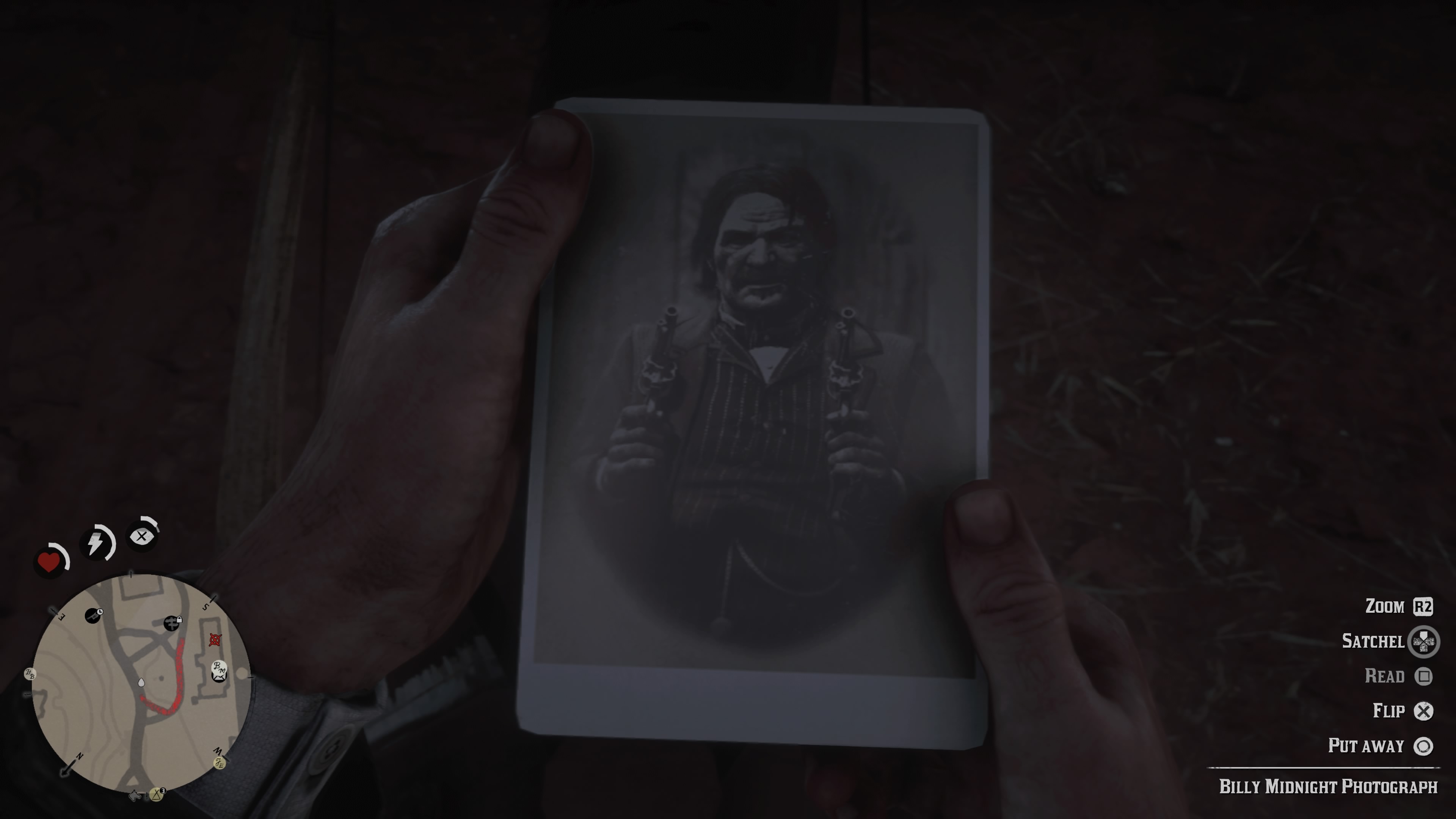 The notes on Billy Midnight are quite clear, Arthur. Ride to Rhodes train station (marked on our map) and ask the clerk about your target by pressing L2/LT and ▢/X. 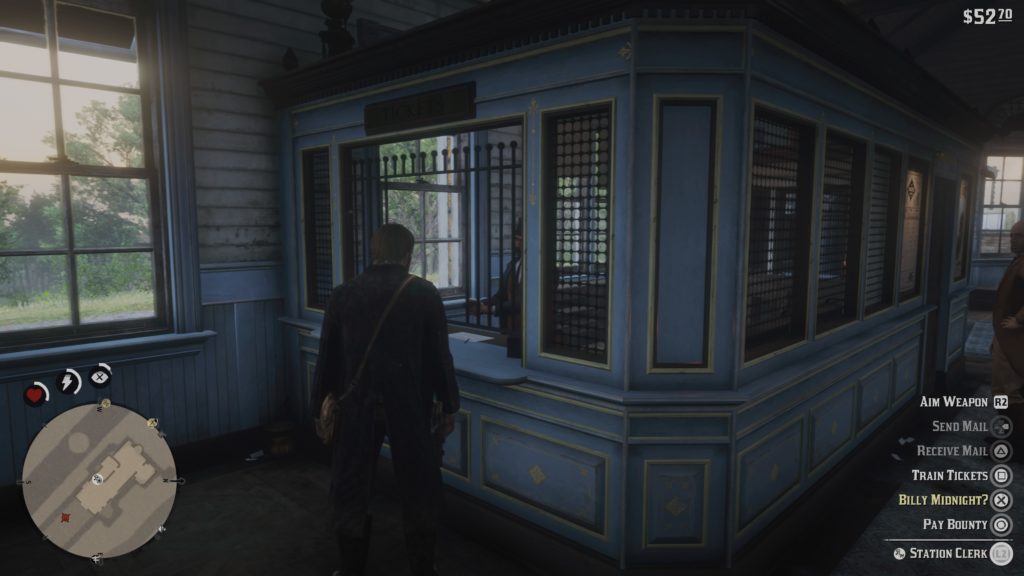 Ask the clerk at the station about Billy Midnight

Now, as you discuss with the clerk a train will arrive at the station. Head inside and go right towards the bar car.
You should see Billy at the bar. Greet him, then get ready to run because Billy is not in the mood to talk and he seems to be quite scared by strangers. Or feeling guilty.

As you chase Billy climb through the cars you will have to climb on the roof where the duel starts. What makes this fight different than the rest is that Billy crouches. This means that you need to aim low. As long as you do that you won’t have any difficulties in completing this encounter.

Finally, take a picture of him, using the camera in your satchel, and grab this weapon (Midnight’s Pistol). Now, jump from the train and head to the next target: Black Belle. 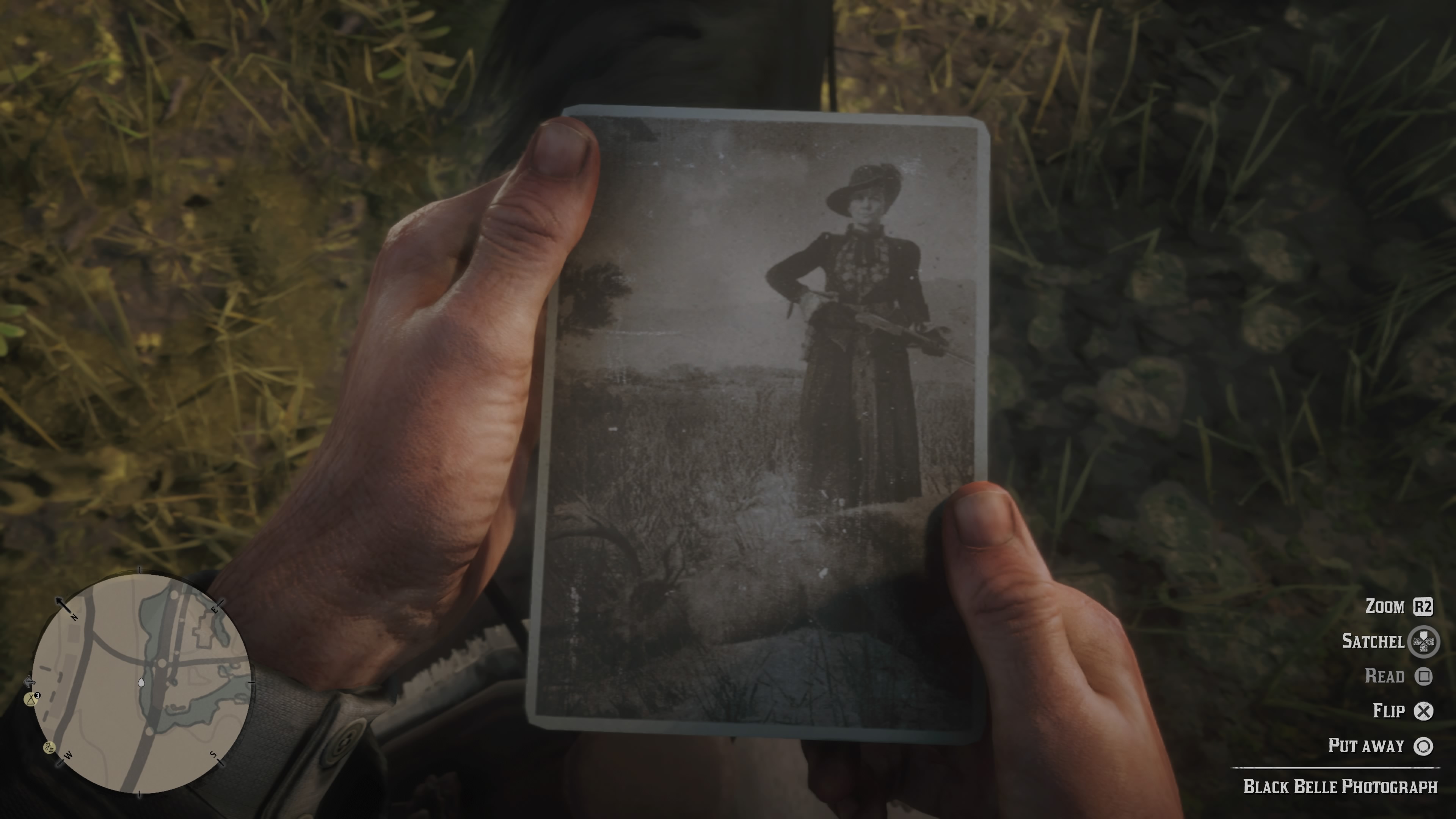 “The grande dame of the gunslingers/the dynamite dowager”

Do not approach, too dangerous for mere biographer”

After you flip the photo of Black Belle and read the biography above, open your map and you will see a new icon (BB) in Bluewater Marsh. Head to that location where you will find a house. Move towards the door to trigger a cutscene, during which you and Belle are attacked by bounty hunters.

Belle agrees to give you the story you want to hear if you help her defeat the bounty hunters. The first one is easy to kill because you will basically detonate a series of charges right next to him. For the rest, however, you have to get ready.

The fight features three sequences. First, you will have to shoot the attackers in front of the house. Stay in cover and pick your targets one by one, until Bell tells you to move to the back of the house.

Additional enemies will come from your left. As long as you aim for their heads and stay low you won’t be in danger. For the third sequence you will have to move back to the front porch, but this time you should see that a Gatling gun was installed. Take out the man handling the weapon first, then those trying to reach it. 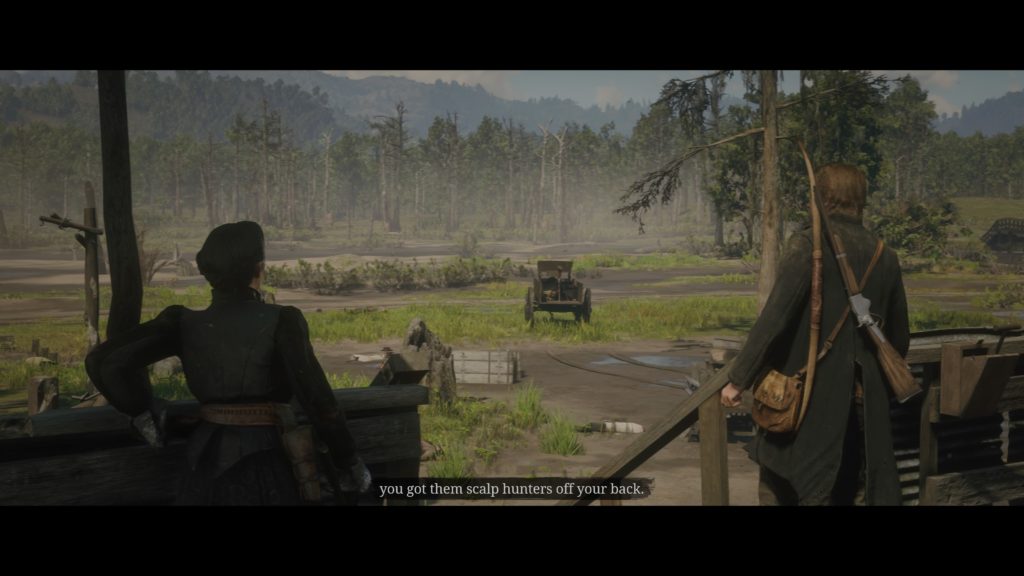 Once you clear all waves of enemies, another cutscene starts. Unlike the other gunslingers, Black Belle is quite easy to convince to pose for a picture. Make sure you take a great one, Arthur!

Since you didn’t actually duel Black Belle, you won’t be able to take her weapon, but hey, there are many corpses to be looted. Take your time and inspect them.

The first four gunslingers in this mission are now history. It’s time for you to focus on the game’s main missions until you reach Chapter 4 and finish A Fine Night of Debauchery.