The First Shall Be Last is a Red Dead Redemption 2 story mission received from Javier Escuela during Chapter 2 of the video game. It can be played after you complete Americans at Rest.

Unlike other missions you have played so far, Red Dead Redemption II The First Shall Be Last will require your presence in Blackwater, which is a territory where Dutch’s gang is wanted. This includes you too Arthur!

But have no fear, because our RDR2 walkthrough will teach you how to survive in that region and how to get the Gold Medal as well.

First, let’s see what Javier wants. Open your map and head to the JE icon out of Riggs Station. Make sure you are equipped accordingly because this mission is quite tricky and has several twists. How about upgrading your rifle with a scope, or better yet buy a sniper rifle?

You should have more than enough money by know if you collected some of the hidden lockboxes and chests. Great! On the road then!

To avoid unnecessary confrontations with the Pinkertons in Blackwater, cross the Upper Montana River close to Javier’s location. Approach him and you will trigger a cutscene during which you will learn that your goal is to save Sean. 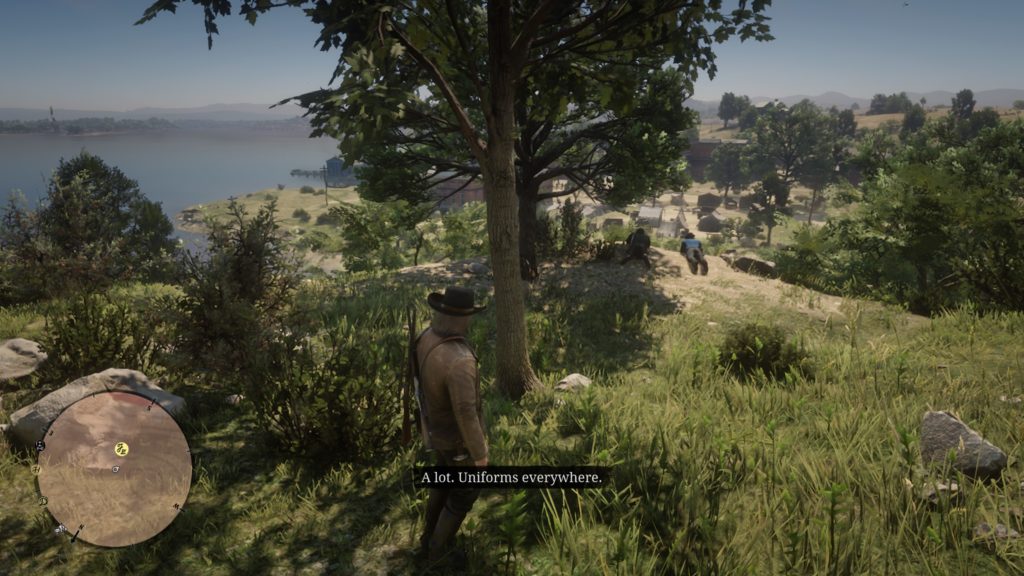 Luckily you are not alone during this mission, so let’s get started.

After the cutscene, mount your horse and ride to the highlighted area on your map, staying close to the river so you can avoid the Pinkertons.

Once you see the wooden boat on the river, follow your partners until the boat stops. Use your binoculars to observe the activity on the boat. Looks like Sean is in trouble… 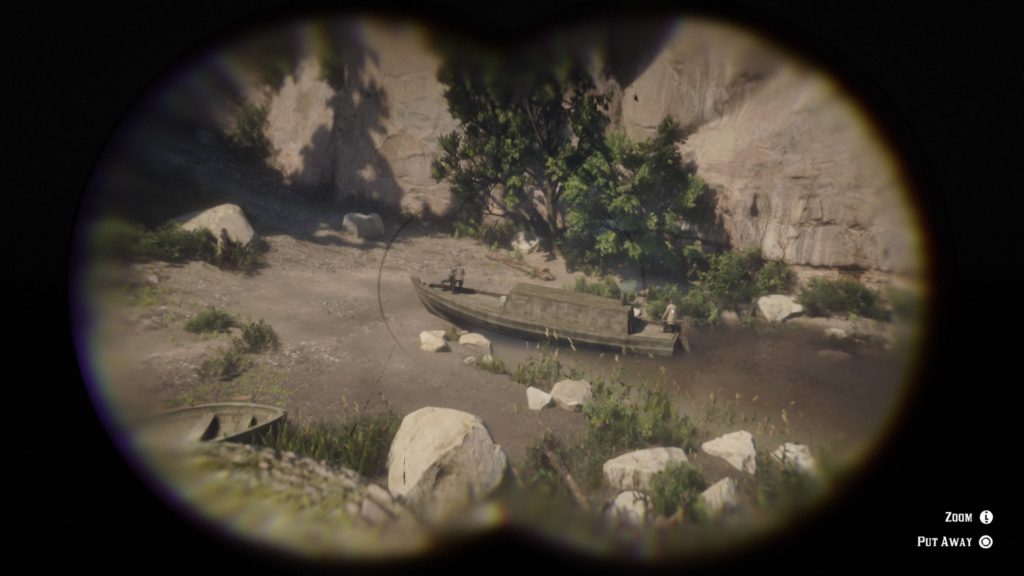 Check the activity on the boat to spot Sean

Dismount your horse on the river’s shore and equip your knife.

Gold Medal Goal Tip: The first Gold Medal requirement is to kill the bounty hunters by the river silently, with Javier. To do so, wait for Trelawny to create the distraction; then crouch and approach the target on the left. Kill him silently from behind and Javier will deal with the other one. 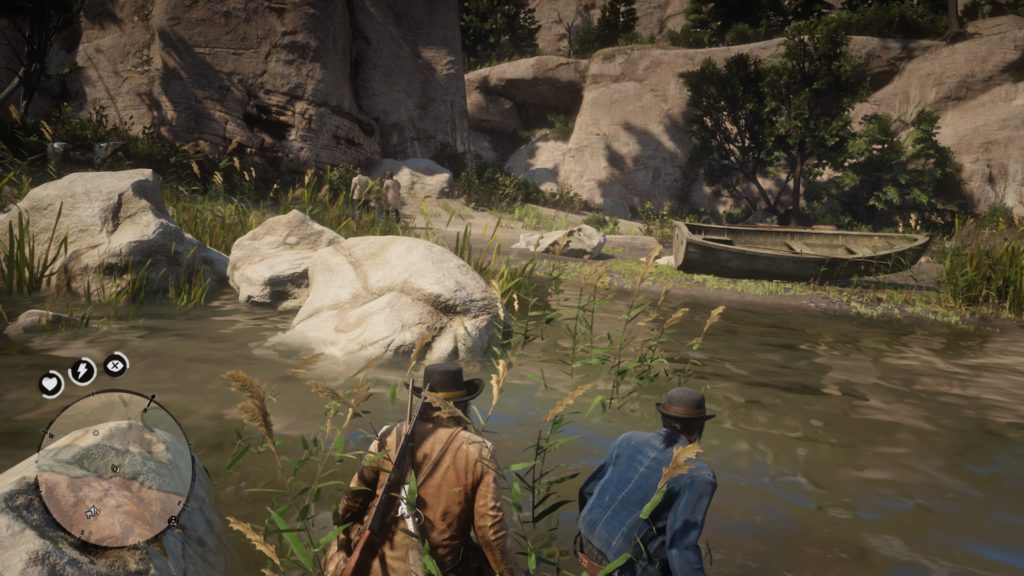 Kill the bounty hunter on the left using your knife

Once you cross the river you have to move up a canyon where multiple bounty hunters await.

Gold Medal Goal Tip: During the next sequence is your chance to score some headshots. A Sniper Rifle will do this job way easier for you especially when you take out the enemy snipers. Stay in cover and aim for the head moving from one cover to another. Don’t waste your time looting bodies, instead focus on securing the headshots. 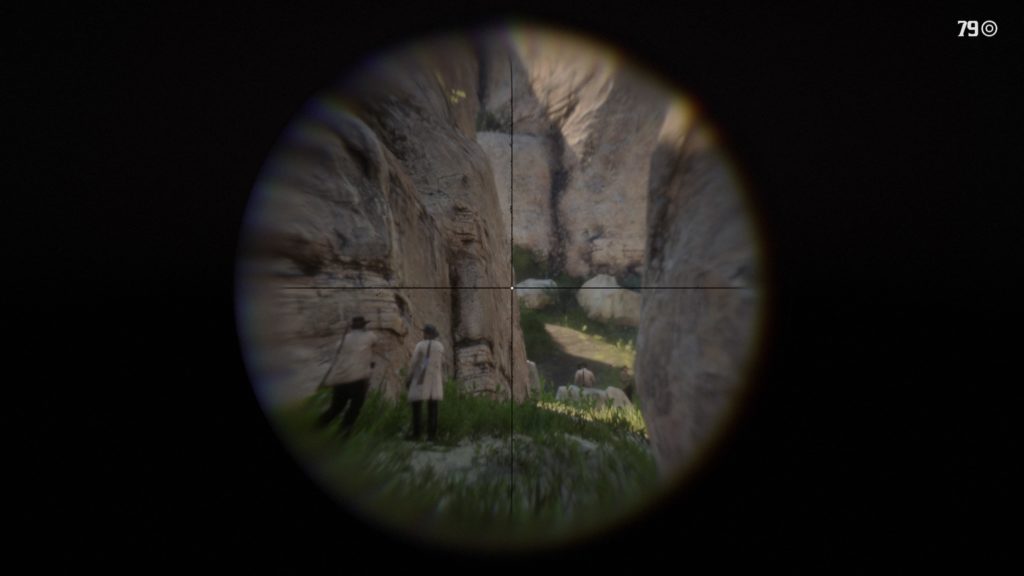 After you get on top of the canyon, keep following Javier and Charles to the camp where Sean is being held captive.

Take cover at the camp’s entrance and start taking out the enemies one by one. There are plenty of targets that will help you secure the third Gold Medal requirement if you use a sniper rifle or even a regular rifle.

Gold Medal Goal Tip: When the fight starts, look for a tree behind a wagon to spot Sean. Shoot the rope immediately or you will miss this requirement. If needed approach Sean but remain in cover. The rope is hard to see, so try to get closer and double-check if Sean is on the ground. 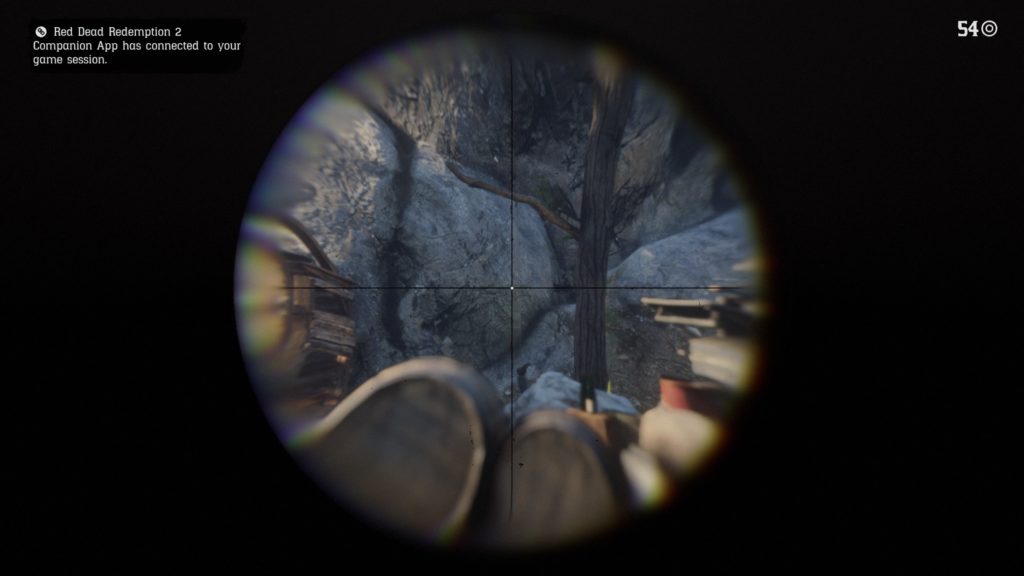 Clear the camp, then head to Sean and tie the rope on his hands. Once your partners depart and if you didn’t use any health potions during this mission, the Gold Medal should be yours. As well as a new Tomahawk.

Feel free to loot the bodies in the camp if you like, or head back across the river. Keep in mind that staying too much in this camp will eventually lead to a confrontation with the law. So move quickly if you decide to loot the bodies.

Did you manage to get the Gold Medal in The First Shall Be Last? Let us know your strategy in the comments section below and don’t forget to follow us on Facebook, Twitter, and Instagram.