Bounty Hunting is a Red Dead Redemption 2 activity which allows you to earn additional money while playing the video game developed by Rockstar Studios.

RDR2 features 10 Bounty Hunting targets, you need to capture dead or alive. These targets can be approached starting Chapter 2 of the video game.

Assuming you need some extra cash, we have created the following Red Dead Redemption 2 Bounty Hunting Guide which offers several tips that will help you complete these activities.

The first thing you should know about Bounty Hunting is that the outlaws you have to find are different than the gunslingers you duel as part of The Noblest of Men, and a Woman Stranger Mission.

Simply put, Bounty Hunting refers to 10 outlaws you must capture dead or alive in order to receive the rewards on their heads.

When you start Chapter 2 in Red Dead Redemption II, you will notice that the first two RDR2 Bounty Hunting Posters appear. One is in Valentine and one in Saint-Denis.

The Posters for Bounty Hunting in RDR2 can be found at the local police stations in specific cities.

All you have to do is to enter the police station and collect the poster on the wall. Next, make sure you read the poster and the location of your Bounty Hunting Target appears on your in-game map. In case you encounter difficulties in finding them, you can see all Red Dead Redemption 2 Bounty Hunting locations on our map below.

As you will find out, some targets must be caught alive, while others can be killed. Failing to deliver a Bounty Hunt outlaw in the required state, will lead to instant failure of the activity. In other words, if a poster requires you to capture a target alive but you kill the outlaw, you will fail the mission.

Another important aspect that should be mentioned is that you can’t play these side-missions if you are wanted. Head to a post office and pay the bounty on your head first, cowboy.

So, what happens after you find the location of an RDR2 Bounty Hunt?

Well, Arthur, you need to find a way to secure the target, by either approaching silently, rushing, or brute force. Check out walkthroughs below if you wish to learn how to complete all Bounty Hunts in Red Dead Redemption 2. 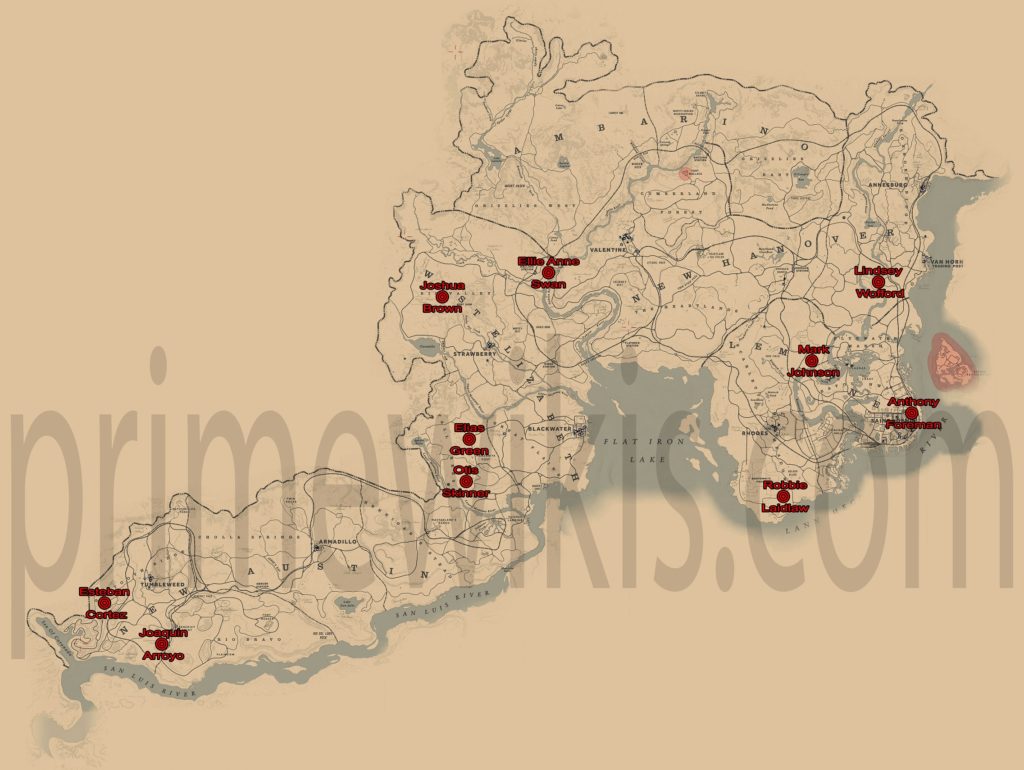 Bounty Hunt Mission Description: “Lindsey Wofford a Commander of the Lemoyne Riders is wanted for raising an unlawful militia against the State. Capture dead or alive for a $100 reward in Saint-Denis.” 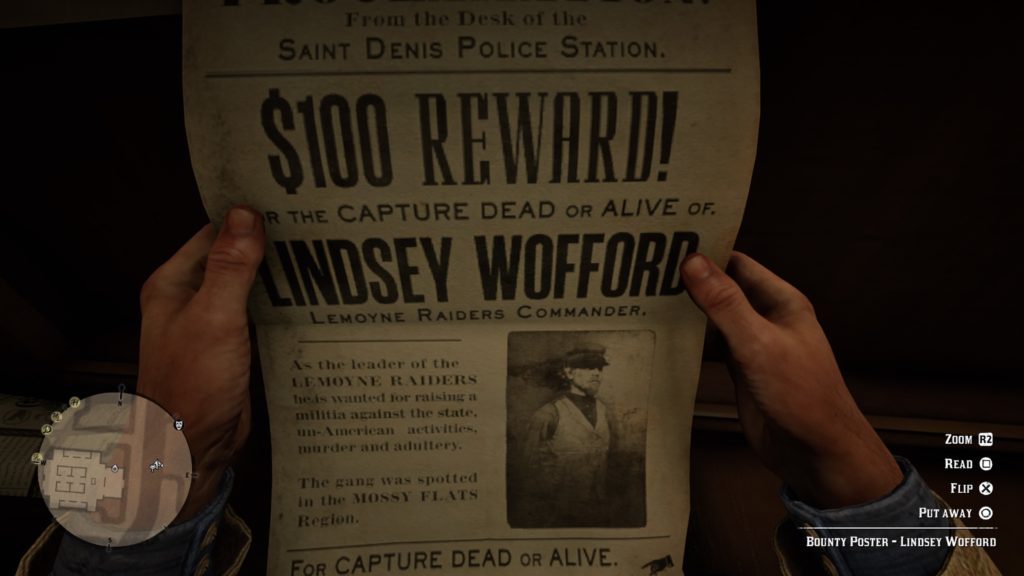 In Red Dead Redemption 2 Lindsey Wofford is at Fort Brennand, east of Emerald Station. Approach the fort, through the main gate, and take cover at the entrance.

A good weapon for this situation is a sniper rifle as it allows you to take out all Lemoyne Riders one by one, from distance.

When you open fire, multiple enemies are alerted, so use the Dead Eye skill to score headshots. On the upper wall on the other side of the fort is a Gatling Gun. Keep an eye on it and take out any enemy who gets near it.

Several Lemoyne Riders will also try to approach you from behind. The Dead Eye is the best option here to take them out faster.

After you clear the fort, Lindsey will hide in the tower on the right side of the fort. If you have a sniper rifle, be patient and you can score a headshot on him from the entrance. 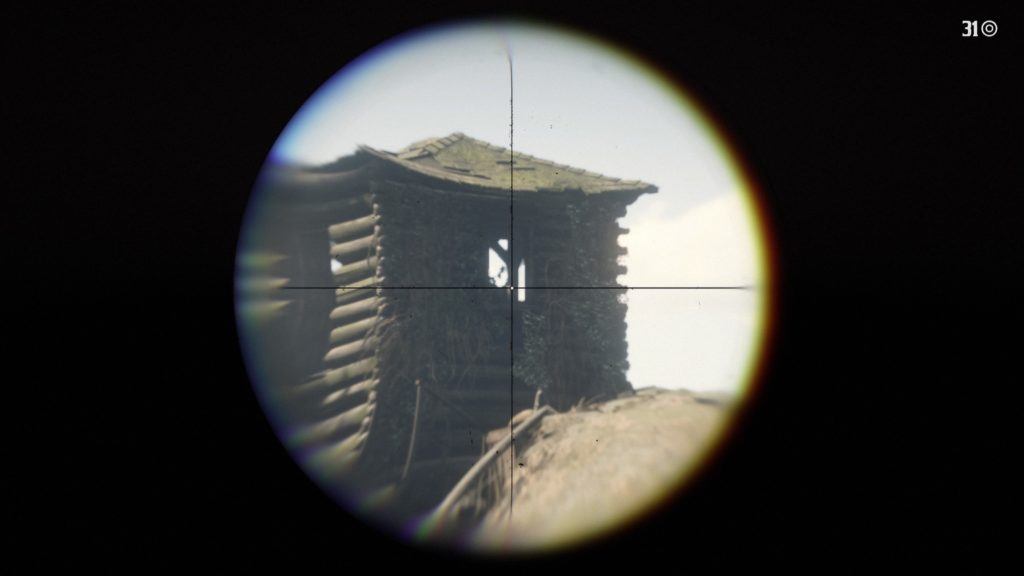 Take out Lindsey Wofford with a sniper rifle

Once you kill Lindsey Wofford, head to the tower using the ramp on the left side of the fort and pick him up. Before leaving the area make sure you collect all chests and hidden boxes as well as the two RDR2 unique items.

Take Lindsey back to the police station in Saint-Denis, and drop his body in the cart outside. Finally, talk to the sheriff in the office to claim your reward.

Bounty Hunt Mission Description: “Ellie Anne Swan is wanted for the crime of matricide. She is reported to have an unknown male accomplice. A $25 reward is offered for apprehending her alive in Valentine.” 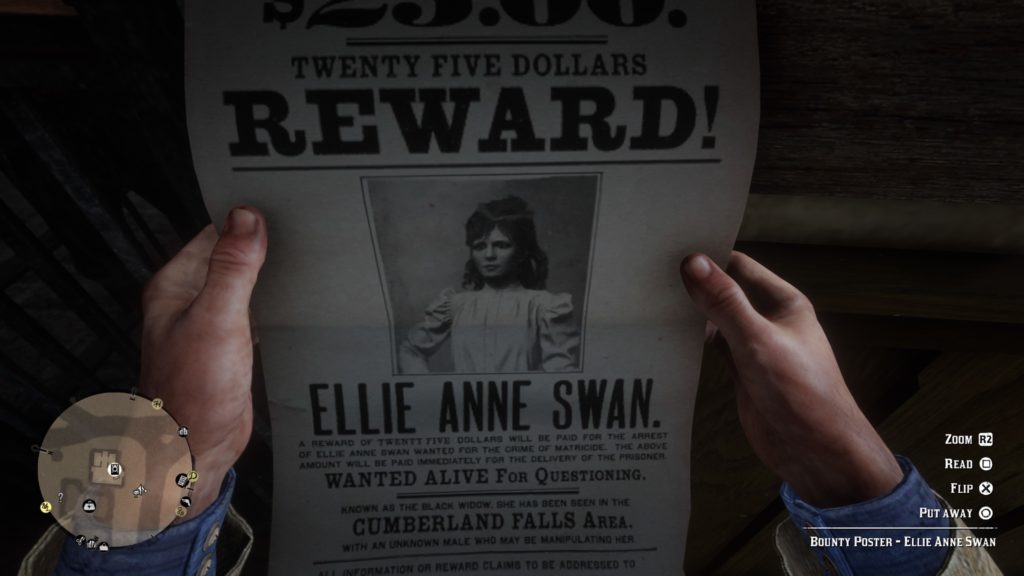 The second RDR2 Bounty Hunt Target is a woman who goes by the name of Ellie Anne Swan. As you can see, unlike the previous one you have to bring Ellie back alive. This means no weapons, Arthur!

First, pick the Bounty Hunting Poster for Ellie Swan from the Valentine sheriff station. Read it and her location appears on your map. You can also see it on our map above, just east of Wallace Station.

As you approach the area, look for Ellie Anne in a camp she set with her boyfriend; under a large rock close to the river. You can see it in the picture below. 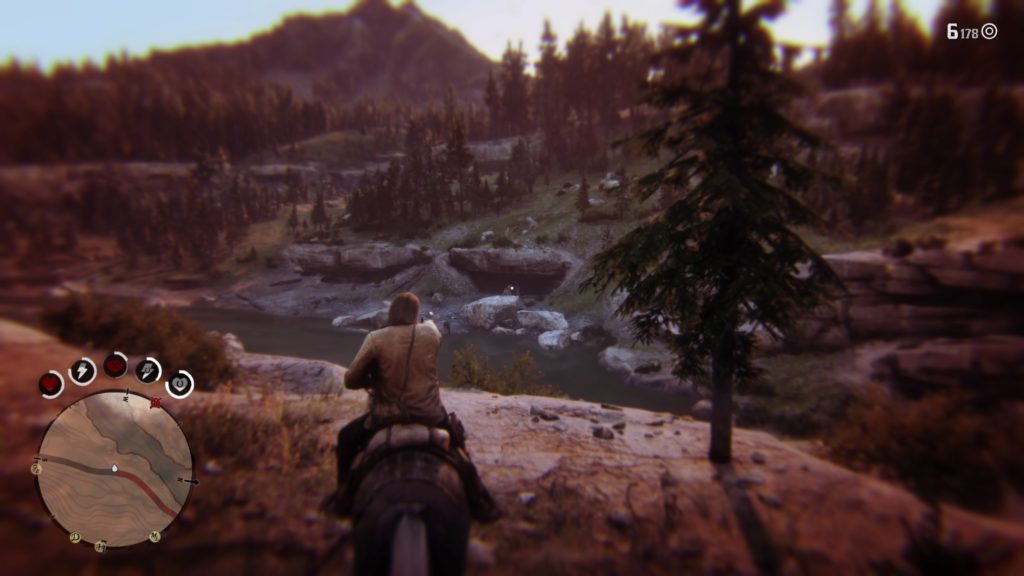 Ellie Anne Swan is camping under a rock near the river

Approach the camp, and equip any weapon then sprint towards your target a knock her down with a melee attack. Don’t pull the trigger because you will risk to kill Ellie and fail the mission. Once you put her down deal with her boyfriend as you see fit.

Before Ellie wakes up, hogtie her. Now, put her on your horse and deliver the target to the sheriff station in Valentine. Don’t forget to pick the money from the desk; once you drop Ellie in the cell.

Bounty Hunt Mission Description: “Joshua Brown a notorious gunslinger, is wanted for unlawful killings. A $40 reward is to be paid to anyone who apprehends him alive and returns him to Strawberry.” 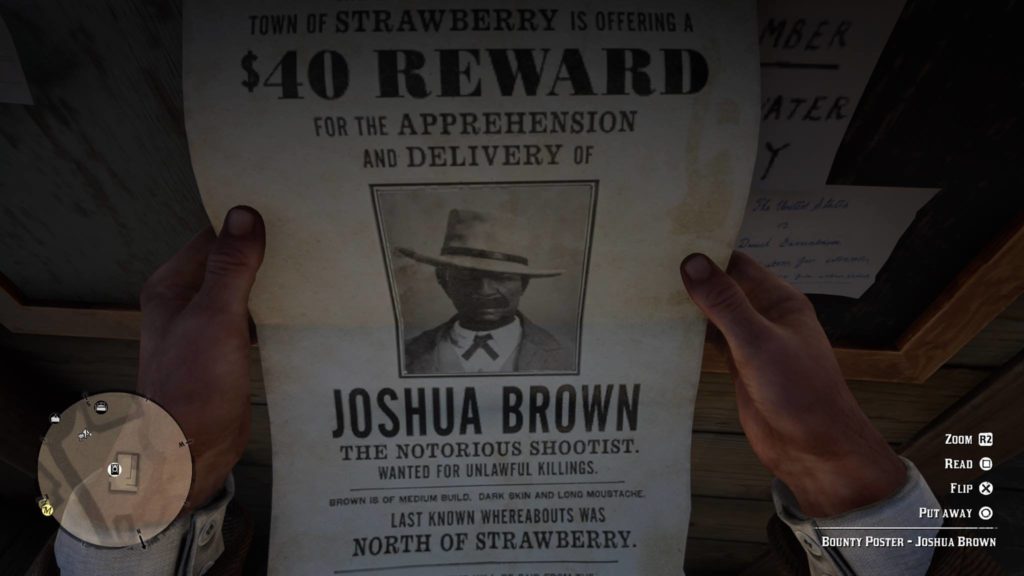 Requirements: Complete Blessed are the Meek?

You’ll be able to go after him once you complete Blessed are the Meek? story mission; however you’ll have to wait until Strawberry is no longer under lockdown. Once the area becomes safe; head back to the jail building and take the poster (pictured) from the wall.

From the bounty’s description, you can learn that he is a gunslinger, which means that a duel will take place. You can also see that the sheriff want Joshua Brown alive. So, let’s go get him.

Head to the mine marked on your map (north-west of Strawberry). When you enter the mine, a short cutscene will start and Joshua Brown will trigger. Get ready because the moment the cutscene ends, the duel starts. Make sure you aim for Joshua’s right hand (left side as you face him).

Your goal is to disarm not kill the gunslinger. After he loses his weapon, Joshua will try to run. Quickly go after him and when you are close enough press O/B to hit him. Next, hogtie Joshua and put him on your horse. 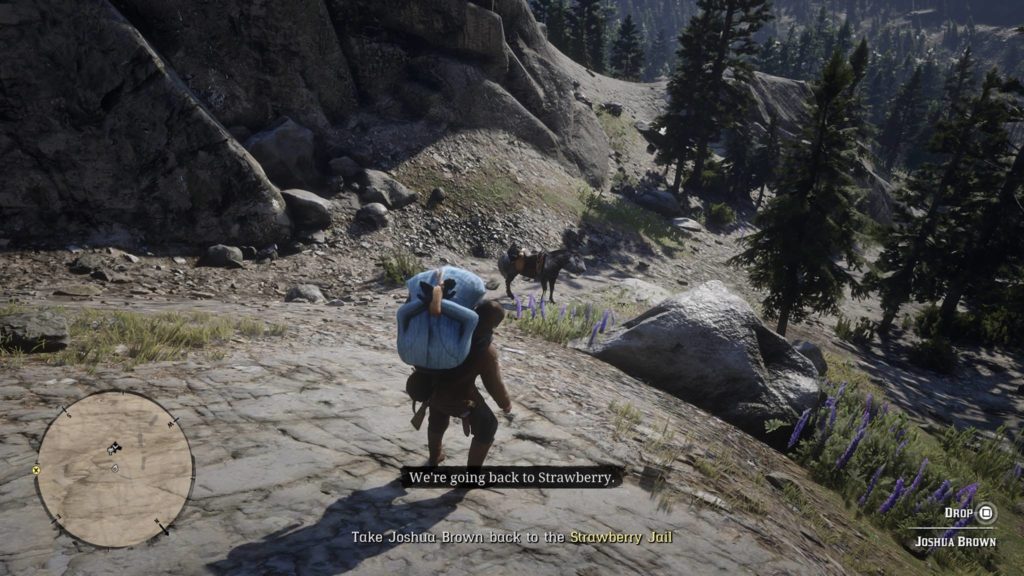 Hogtie Joshua Brown after you disarm him

Congrats! You got Joshua Brown, so head back to Strawberry and drop him in one of the cells downstairs. Don’t forget to pick your reward from the sheriff on your way out.