American Distillation is a Chapter 3 mission featured in Red Dead Redemption 2, the video game developed by Rockstar Studios for PlayStation 4 and Xbox One.

This mission is triggered by talking to Dutch, in Rhodes; after completing The New South. Furthermore, in order to play American Distillation in RDR2, you’ll have to wait 3 in-game hours upon finishing The New South.

As you remember, at this point in the video game, you’ll have to act nicely while visiting Rhodes. This means that Dutch doesn’t want you to use any weapons.

When you’re ready to begin this mission, make sure you save the game in a new slot, just in case you miss the Gold Medal.

Now head to Rhodes and look for Dutch’s icon (D) on your map.

“Arthur Dutch and Bill become temporarily deputized citizens of Scarlett Meadows County as they help Deputy Archibald shut down a moonshine distillery and steal a wagonload of the Braithwaites moonshine.”

The mission starts at the sheriff’s office in Rhodes. Enter the office to trigger a cutscene during which you and Dutch just got promoted to deputies! 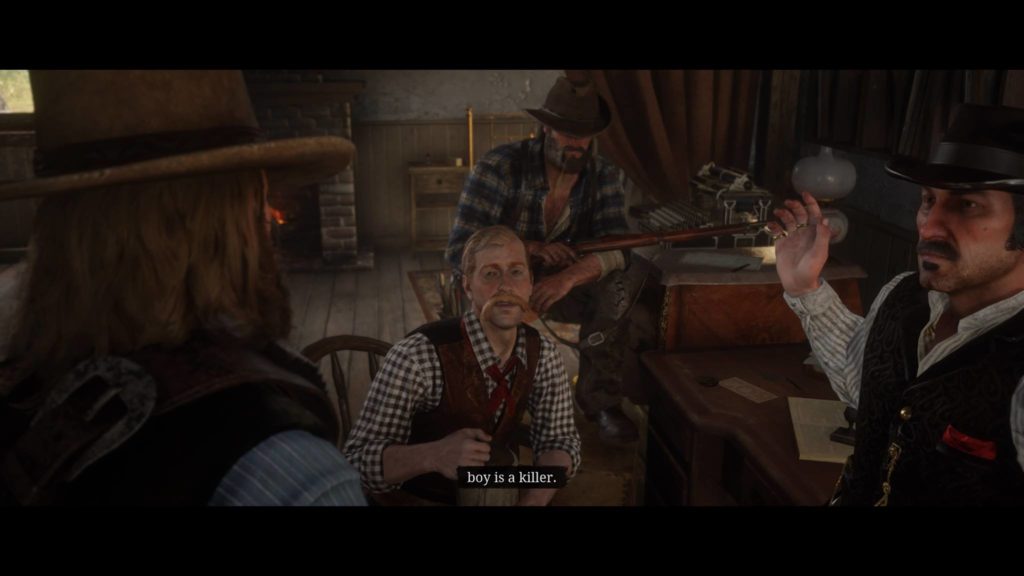 Find Dutch in the sheriff’s office

To make this promotion permanent, though you have to take care of a small illegal business in the woods nearby. Looks like someone is producing moonshine illegally.

Exit the office and jump into the cart in front of the building. For now, Archibald will be the driver, so sit back and enjoy the ride.

As you move north you’ll reach a crime scene near a wagon (pictured below). Get down and follow Archibald who will find a clue leading to the Lemoyne gang. 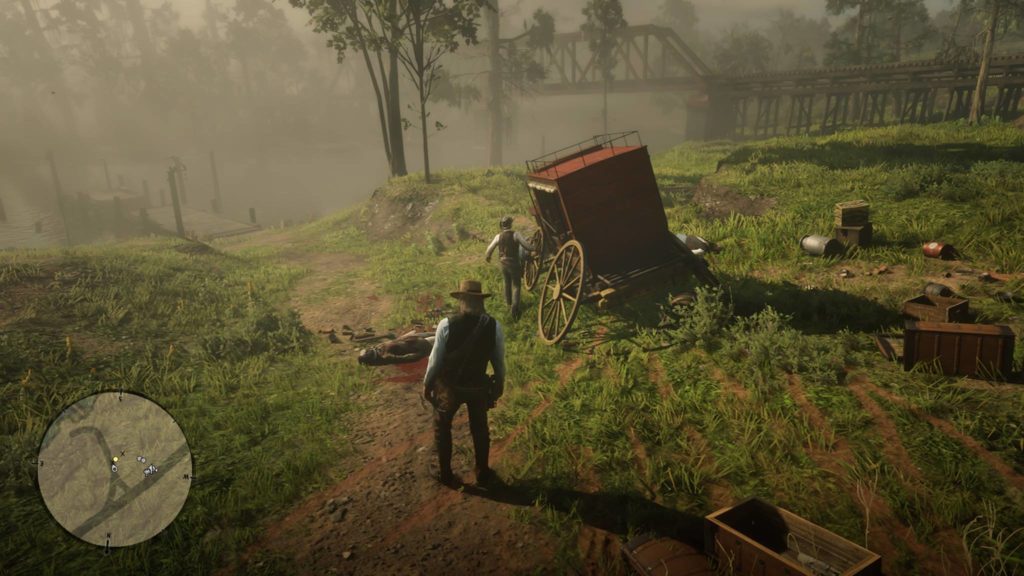 Investigate the crime scene with Archibald

Now, get back to your cart and take the reins. Drive to the location marked on your minimap, just west of Lagras. Stop the wagon when you reach your destination then keep following Archibald.

When Dutch asks you which path to take, pick left, then follow Bill towards the first moonshiner. Remember to remain crouched because this part of the mission must be completed stealthily.

So, head towards the first target near the wagon (pictured), and take him down with a punch.

Take out the first moonshiner from behind

While Bill hogties him, head to the other one, overseeing the distillery. Remain crouched and hit him from behind. 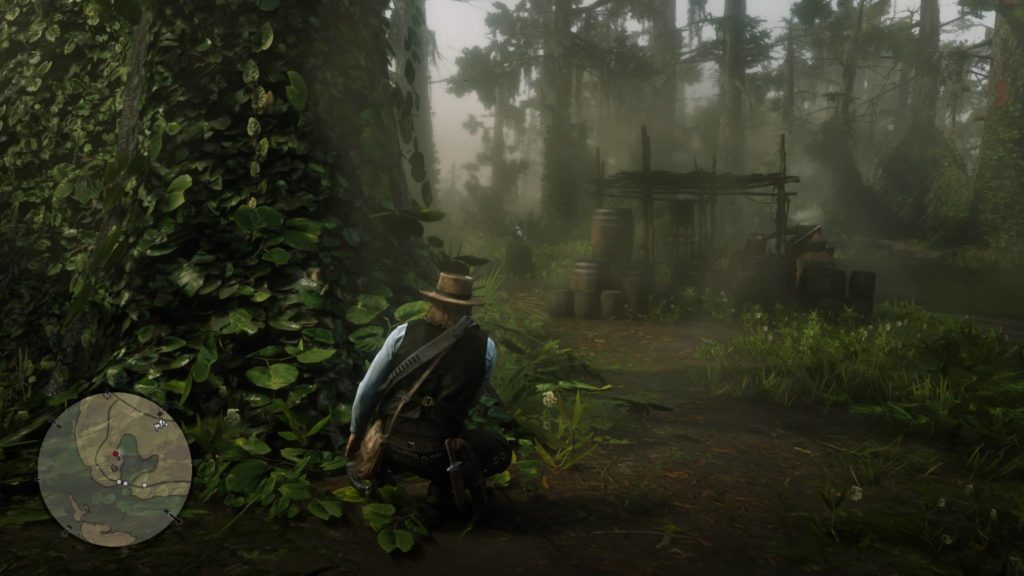 Now hogtie and bring him to the cart where you took down the first enemy. Drop him by the wagon, then head back to the distillery by the lake.

Plant the dynamite on the moonshine bottles (also pictured), then ignite it and step away as fast as possible. 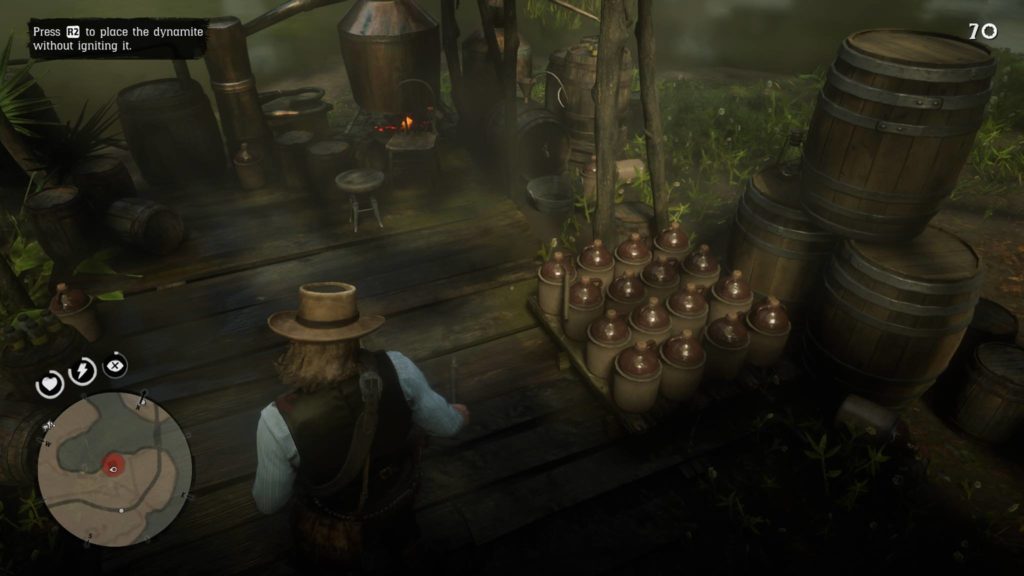 Plant the dynamite on the moonshine bottles

When the dynamite detonates the shootout begins, and this is where the Gold Medal requirements must be met.

Gold Medal Goal Tips: Three of the Gold Medal requirements depend on the shootout you’ve started. Immediately return to Bill and stay in cover all the time. You can’t take damage during this section, but you can consume tonics to boost your Dead Eye. Keep it active as much as you can and pick your targets one by one with headshots. As long as you don’t leave your initial cover, most enemies will come to you. 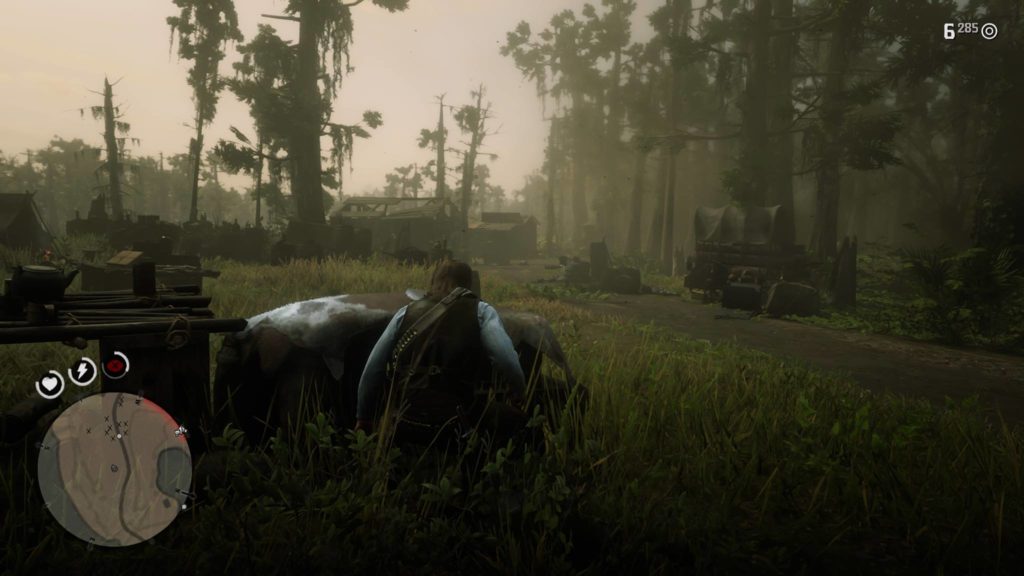 You can take out almost all enemies from this position

You can use any rifle you have because as long as you activate Arthur’s Dead Eye you’ll most likely score the required number of headshots without taking damage. Finally, since you’re using the Dead Eye it’s quite hard not to hit your enemies, thus your accuracy will remain above 70%.

After you clear the moonshiners’ camp, return to Dutch but pay close attention because as you leave the area he will ask you if you wish to race him.

Gold Medal Goal Tip: Accept Dutch’s challenge and start galloping following the path marked on your minimap. If your horse’s stamina core is upgraded, you won’t encounter difficulties in winning the race against Dutch. If it’s not, cut corners, and tap X/A to match your horse’s gallop. Avoiding obstacles such as trees is obviously mandatory. 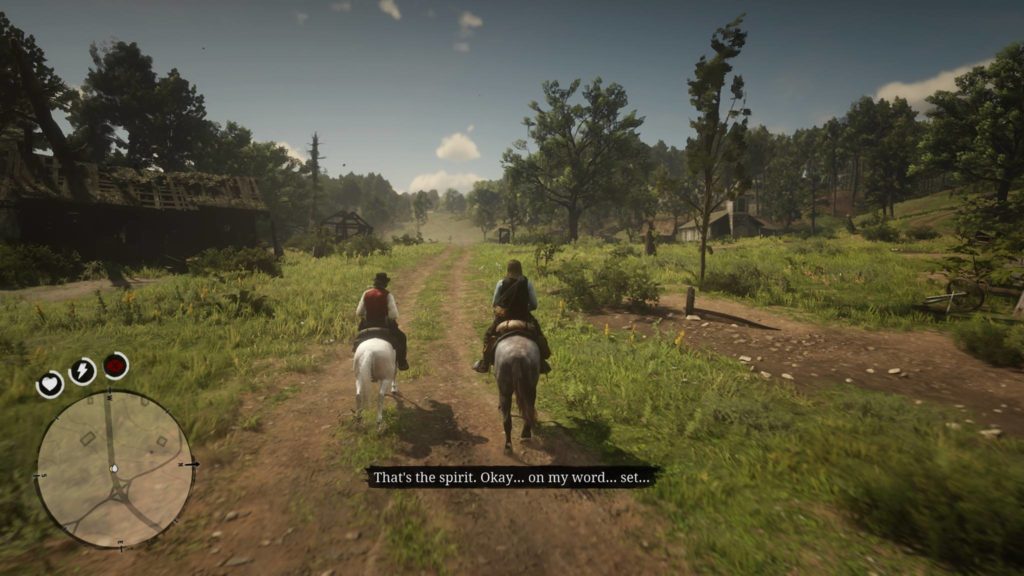 Make sure you accept Dutch’s challenge

When you arrive at your camp, American Distillation ends, unlocking Advertising, the New American Art story mission, and No Good Deed stranger mission.

You can play any of the two missions above, or you can focus on other activities, following our Red Dead Redemption 2 Wiki.