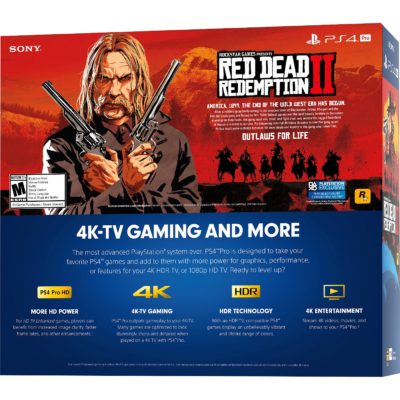 How big is Red Dead Redemption 2? The biggest. Literally.

After the recent announcement of Red Dead Redemption 2 PlayStation 4 Pro Bundle, a series of retailers listed it for pre-order. And Target is one of them.

Along with the details about the Red Dead Redemption 2 PS4 Pro Bundle; however, the retailer also uploaded a series of images with the box.

The most intriguing is the one above which, if you zoom and look really closely (above the blue area); reveals the size of Red Dead Redemption 2 on PS4. 105 GB!

What does this mean?

Well, first it means that Red Dead Redemption 2 is the video game with the largest file size at launch.

Secondly, it means that you have three choices if you want to play it the day it releases. You can start pre-loading the game earlier (assuming you have a valid pre-order) or buy a physical version of the game which currently costs $59.96 on Amazon.

Alternatively, you can opt for the Red Dead Redemption 2 PlayStation 4 Pro Bundle which includes a copy of the game and costs $399.99 USD (also on Amazon).

Regardless of how you decide to buy Red Dead Redemption 2, it is worth considering the PlayStation 4 version; especially because all content that will be released after the game will come on PS4 first.

It is a deal made by Rockstar and Sony, similar to the one for Call of Duty: Black Ops 4 DLC’s. PlayStation 4 players will get access to all post-release content 30 days before everyone else.

Shadow of the Tomb Raider Gets New DLC Named The Pillar Next Week
December 12, 2018

Minecraft Better Together for Switch and Xbox One Gets Players Together
June 22, 2018