The Red Dead Redemption 2 Event Areas, are fixed locations that worth checking if you want to see how the world around you progresses while playing the video game developed by Rockstar Studios.

These areas should not be confused with the Chance Encounters or with the Points of Interest which allow Arthur to make sketches on his journal; because the Event Areas in RDR2 require your intervention.

It’s worth mentioning that there are 3 Red Dead Redemption II Event Areas you can watch and visit from time to time, in order to observe how they progress. Each Event Area has several stages, and all of them enter the final stage of development when you reach Epilogue 1.

Since the characters you’ll find at these locations will often ask for help; we advise you to consider assisting them. If, on the other hand, choose to antagonize them their progress might be stopped.

On the map below, you can see the locations of all Event Areas in Red Dead Redemption 2, while our guide will explain all stages of development you can observe. 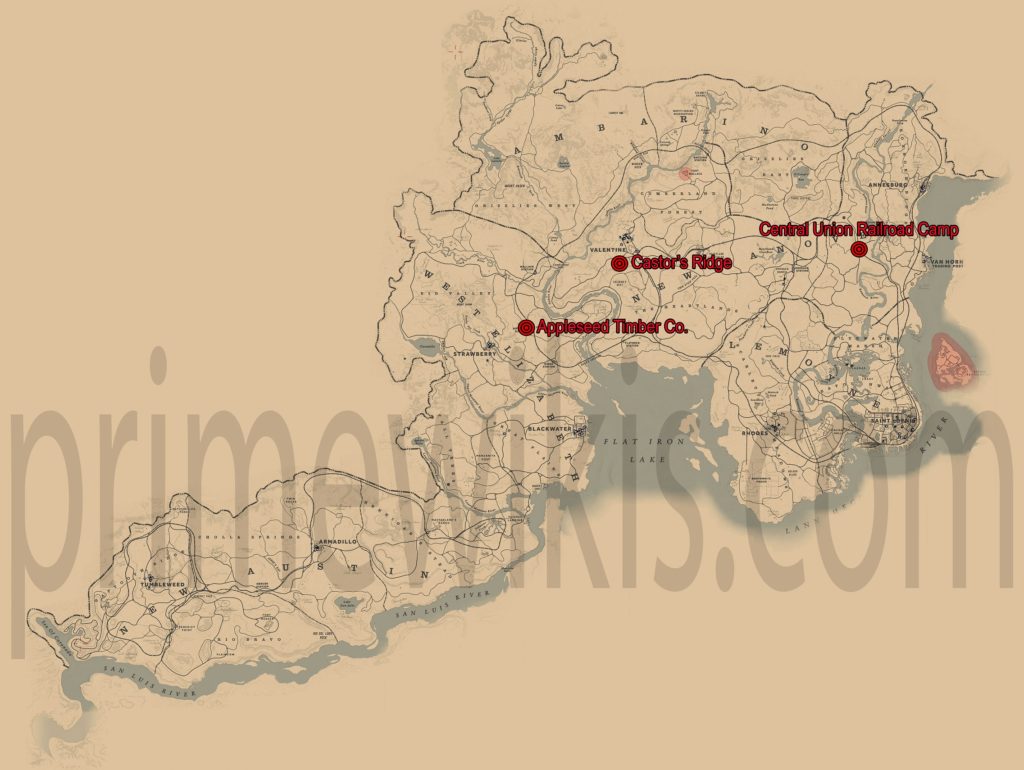 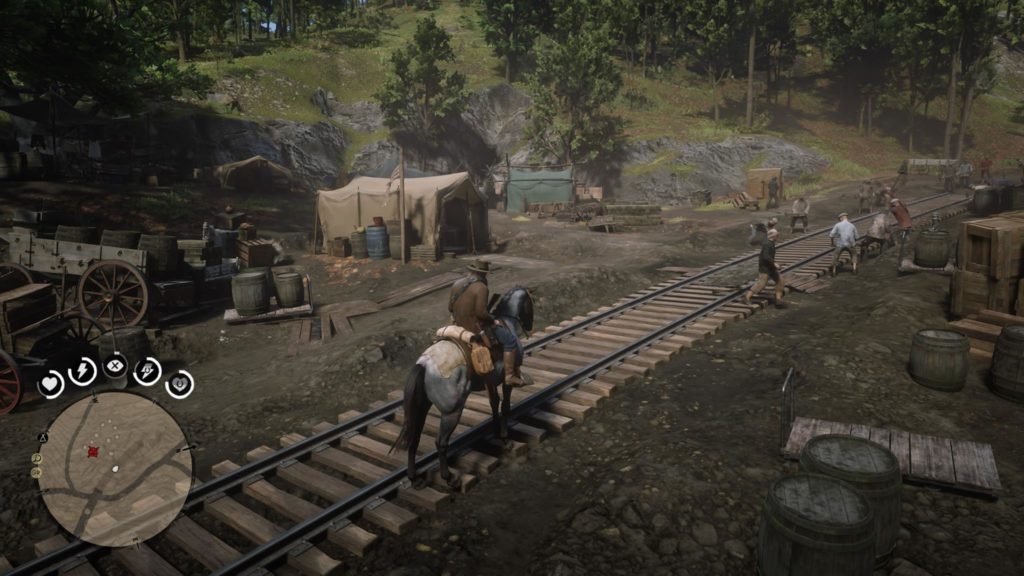 Central Union Railroad Camp is the first Event Area we suggest you check when you start Chapter 2 of the video game.

It is located between Emerald Station and Van Horn, as you can see on our map above.

When you approach the area, you’ll see a camp with several tents and some workers placing train tracks in the vicinity.

To trigger the event at the Central Union Railroad Camp find the Senior Foreman named Percy Whitsickle. You can see how it looks in the picture below.

After you speak to Percy, if you agree to help him, he’ll tell you that someone is stealing money from the camp. Your goal now is to find the Junior Foreman and follow him to a large tree where a stash of money has been hidden. 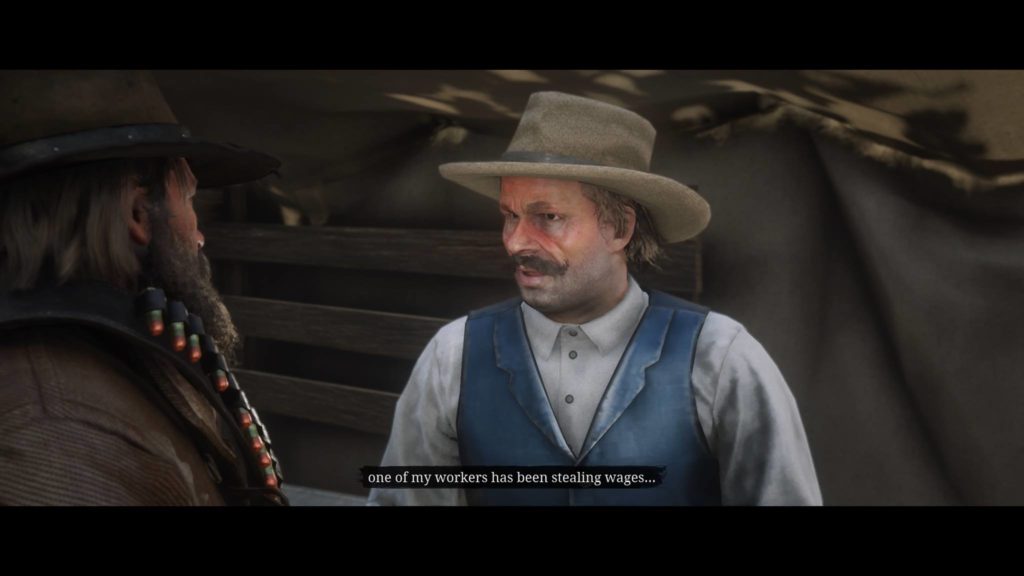 Keep following the Junior Foreman (he’s wearing a black suit) to the tree, but keep a safe distance from him. Approach and confront him when you see him putting his money inside a hole in the tree.

Now, you can opt to threaten him, then hogtie him. Regardless of what you choose, take the money inside the tree.

If you hogtie and take him back to Percy, you’ll unlock an additional conversation. Additionally, the guards at the camp might threaten you when they see you carrying the Junior Foreman. Make sure you defuse them.

For bringing back the stolen money, you’ll receive $50.

If you revisit Central Union Railroad Camp later, you’ll notice that it was relocated close to Elysian Pool.  Again, you’ll have to talk to Percy and agree to help him.

During the following cutscene, he’ll tell you that Leviticus Cornwall has some land nearby and it’s blocking the train tracks Percy must build.

Head to the highlighted area where you’ll find three goons. Confront them and you’ll trigger a duel, during which you should aim for the leader. After you kill him, the other two will run away.

Make sure you loot the leader to retrieve the Property Deed, then return to Percy and give it to him.

The third stage of this event occurs even later in the game. At this point, you should see the Central Union Railroad Camp northwest of Emerald Station.

Talk to Percy again and he will ask you if you need supplies. Investigate the southeastern tent and take everything you need.

The final stage is triggered when you start Epilogue 1.  Visit the previous location near Emerald Station and you’ll notice that the train tracks are now complete end the workers left. 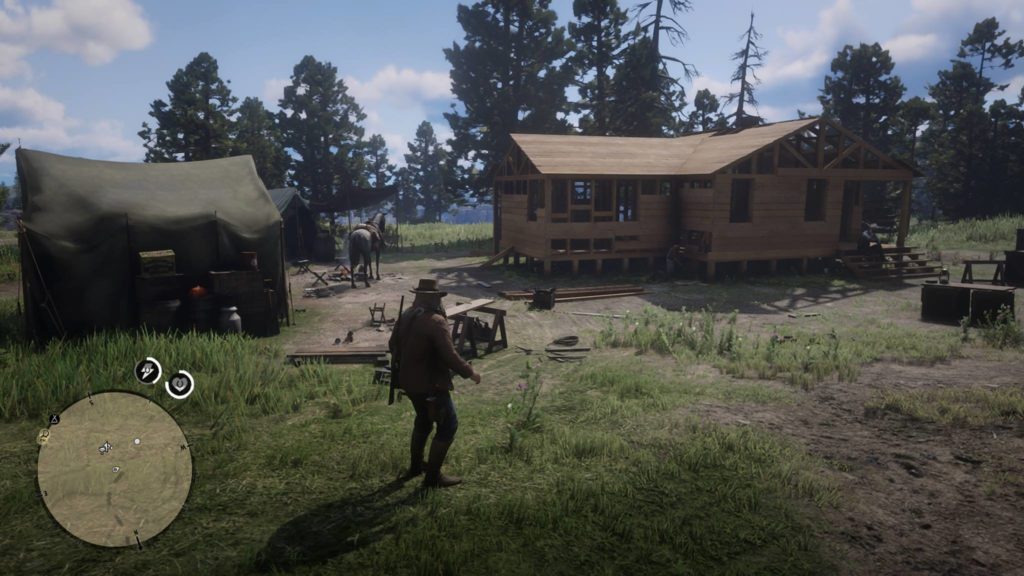 Castor’s Ridge is also an Area Event you can trigger very close to Valentine as you can see on our map. At this location, you’ll see how a cabin is being built by a father and his sons.

When you visit Castor’s Ridge the first time you will see how the foundations of the cabin are being built. You can rob the tents nearby, although we suggest you not to do so.

Instead, talk to the father (pictured below) and you’ll hear him yelling at his sons who drop a wooden frame.

During the second visit, you’ll assist a firefight; the family being attacked by a gang asking for money.

Don’t waste time, and put the goons out as soon as possible, so the construction can continue. You’ll also earn some honor points for this and you don’t have to interact with any of the NPCs.

The third stage of the Red Dead Redemption II Castor’s Ridge Event Area is also the most important because you’ll have to make a decision.

When you approach the house, you’ll notice that the construction is almost over but the work has stopped. When you talk to the father he’ll ask you to give him some money (as pictured below). 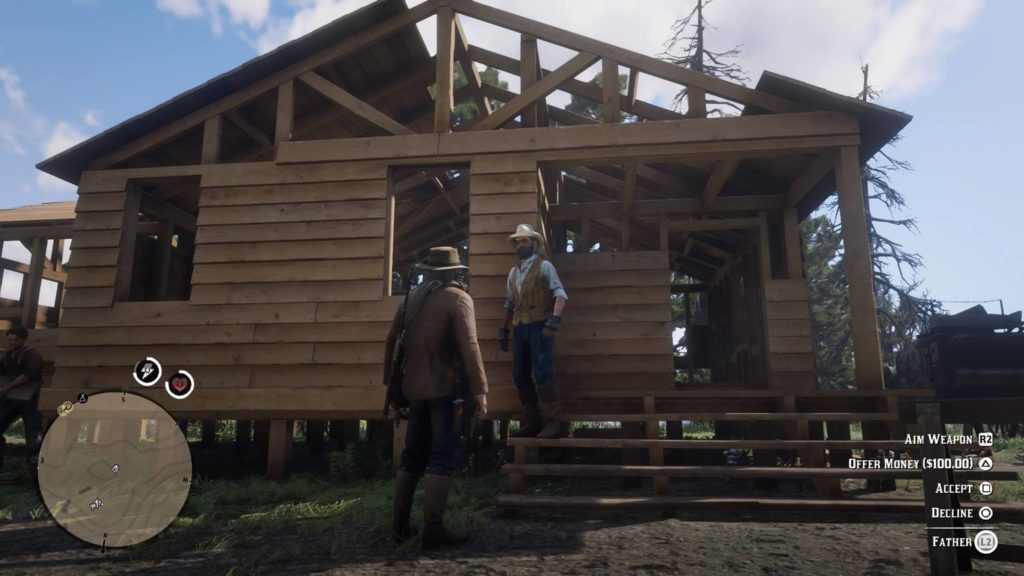 At this point, you can choose to lend him $100 or walk away.  If you don’t accept the house can’t be built; therefore make sure you give him the money.

The fourth time you visit Castor’s Ridge the house will be finished. What’s even better, the father managed to sell the house to some farmers moving to this area; which means that now he can pay you back and add some interest too.

Your investment turns out profitable because you’ll receive $150.

When you reach the game’s Epilogue 1, if you pay a final visit to this location, you’ll meet the new inhabitants who have planted a vegetable garden. 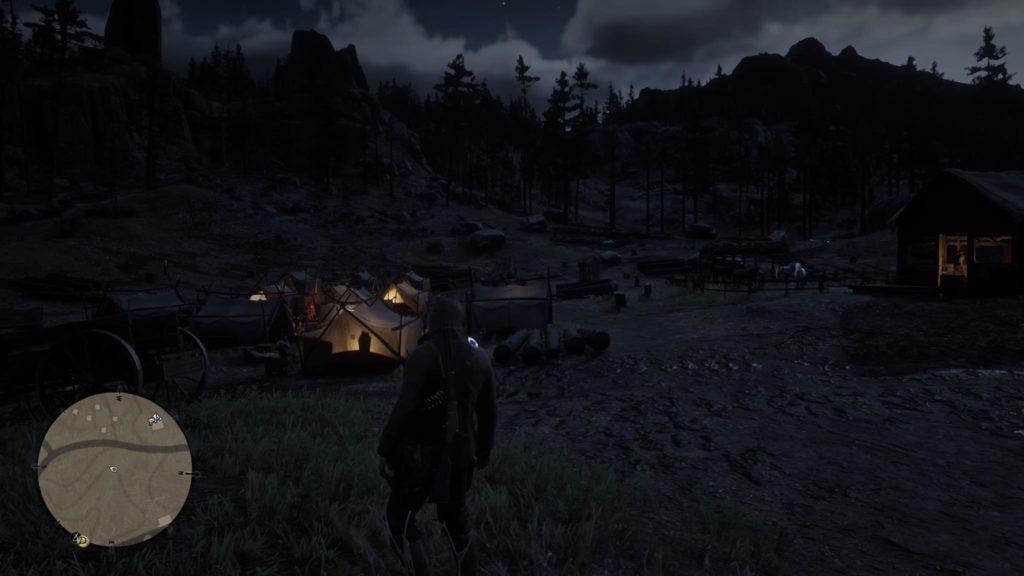 Appleseed Timber Co. is the third Red Dead Redemption 2 Event Area that changes over time.  It is located northeast of Strawberry as you can see on the map above.

Appleseed Timber Co. features five stages of development that can be observed by visiting the lumber camp regularly.

When you first approach Appleseed Timber Co. in RDR2 you’ll notice several Lumberjacks cutting down trees. There are also several tents you can investigate. Robbing them it’s not a good idea, because the workers will become hostile.

By talking to Foreman inside the cabin, you’ll get the chance to help the workers by selling food and medicine. Make sure you help the Foreman to trigger the next stage.

The second time you’ll visit this area, you’ll assist an accident. One of the Lumberjacks has caught his foot under a tree. Hurry up and assist him and you will earn Honor Points for freeing him.

Additionally, once the other workers go back to work, you can talk to the injured man and give him some money. This action will award even more Honor Points.

Before leaving, notice that the Event Area has changed drastically.

During the third stage of this event, the Lumberjacks are on strike and the Foreman is arguing with them (pictured below). 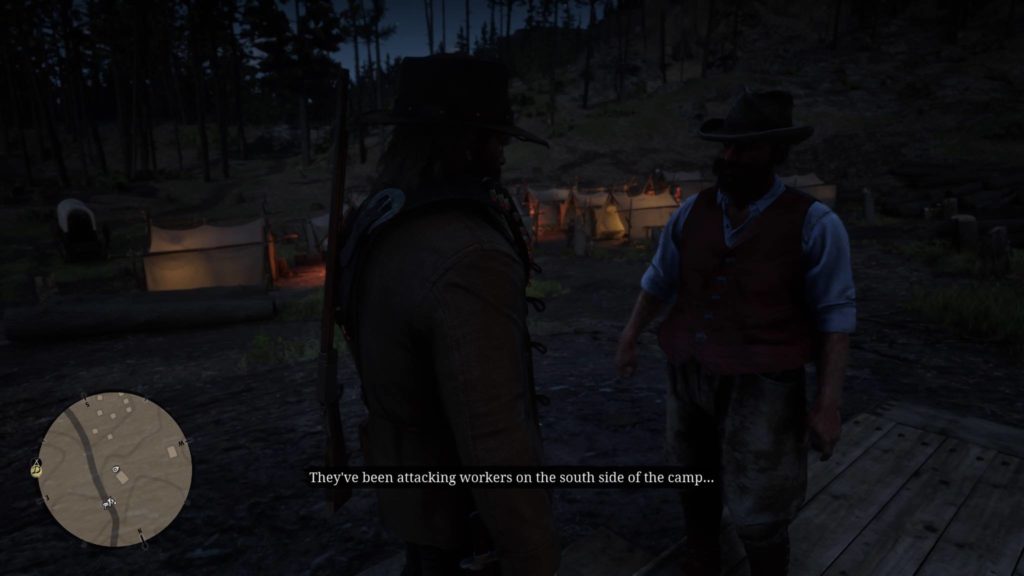 The reason is some wolves in the nearby forest.  After you talk to the Foreman, agree to help him and head to the highlighted area where you should find a carcass. From there, follow the track in the forest. This section is similar to those you have to complete while hunting the Legendary Animals in Red Dead Redemption 2.

Soon, you’ll find the corpses of two workers on the path leading to the hill where Micah sets camp during An American Pastoral Scene story mission.

If you already killed the Legendary Wolf, the three gray wolves you encounter won’t pose a threat. Activate Arthur’s Dead Eye and take them out one by one.

Once you kill all wolves, return to the Foreman and tell him that the area is safe. Make sure you also grab the money on his desk ($50).

If you visit the same camp by the end of Chapter 6 in the video game, you can see the Appleseed Timber Co. lumber camp has been dismantled and all workers left.

After you reach Epilogue 1, make sure you visit this place one more time, to observe that nature took back the Appleseed Timber Co. Event Area and everything returned to normal.

Division 2 Eagle Bearer Guide: How To Get The Exotic Assault Rifle
February 7, 2020