Hey Arthur! Spring is finally here! And John started to recover thanks to you. Along with the sun; however, Spring also brought new plans.

Seems like Dutch forgot that initially, he stopped here only for a short time. Now he wants to go after Colm and that train he wants to rob. Damn Dutch, the Pinkertons waited for Spring too…

Nevermind, Arthur. You have no word in this. Dutch is the leader of the gang, and if he wants to hunt Colm O’Driscoll, you must follow him.

But how about Leviticus Cornwall? Is Dutch crazy enough to try stealing from him? He is one of the richest men in this area. Well, looks like he won’t be for long if Dutch’s plan works.

“In need of money and with the plans and explosive stolen from the O’Driscolls’ camp, the gang ride out to rob Leviticus Cornwall’s private train.”

Follow Dutch because he will share his plan with you. Keep in mind that your job is to take care of Cornwall’s private train car. The small cutscene that interrupts your journey will bring you to an area where the snow is barely visible

Continue to follow the gang up to the point where you can see the train tracks. 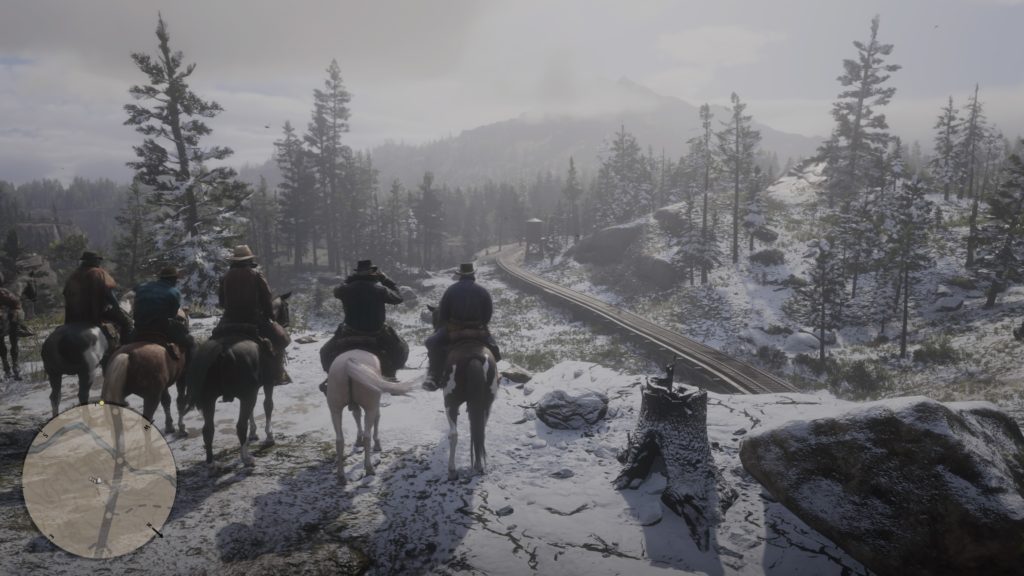 The perfect spot for a train robbery

Your first objective is to check on Bill by the tracks. Head down the small hill and move to the marker on the map. Bill is setting up the dynamite and he needs help.

Pick up the wire near him, and move to the nearby rocks where you will find the detonator.

Connect the wire to the detonator by pressing △/Y.

Now get back to your horse and return to Dutch up on the hill. Time to use the mask, Arthur! Press  L1/LB  to bring up the item menu and then R1/RB. Next, select the mask using the right thumbstick and release L1/LB. You are all set, cowboy!

But the dynamite is not, and without an explosion, the train won’t stop!

Head right and follow Lenny. Jump on the train Arthur, and look left because Lenny is hanging.

Approach him immediately and pick him up to complete the first Gold Medal Goal. Damn, that was close… 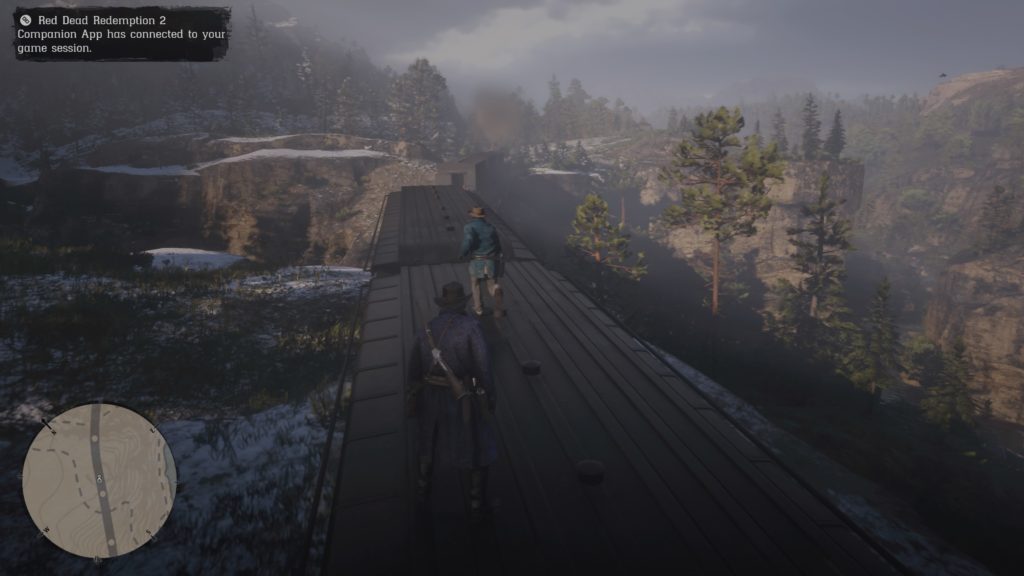 Don’t forget to save Lenny

Together with Lenny enter the train and move forward.

Gold Medal Goal Tip: The guards inside the train are easy targets so you should use this sequence to score as many headshots as you can.

Tell Lenny you will take the lead and pick one target at a time scoring headshots. When you reach the front side of the train, aim your weapon and kill the driver before he throws Lenny out of the train.

Now, that you managed to stop the train, the shootout sequence begins. Luckily you will be behind cover so make sure you don’t risk being hit. In this sequence, you have to focus on not taking damage, on not using health items (which is quite obvious since you won’t need them); and on killing all guards in 1 minute and 30 seconds.

Gold Medal Goal Tip: During the shootout keep an eye on the guards that spawn on top of the train cars on your right. Take them out as soon as possible, and don’t forget to advance from one cover to another. 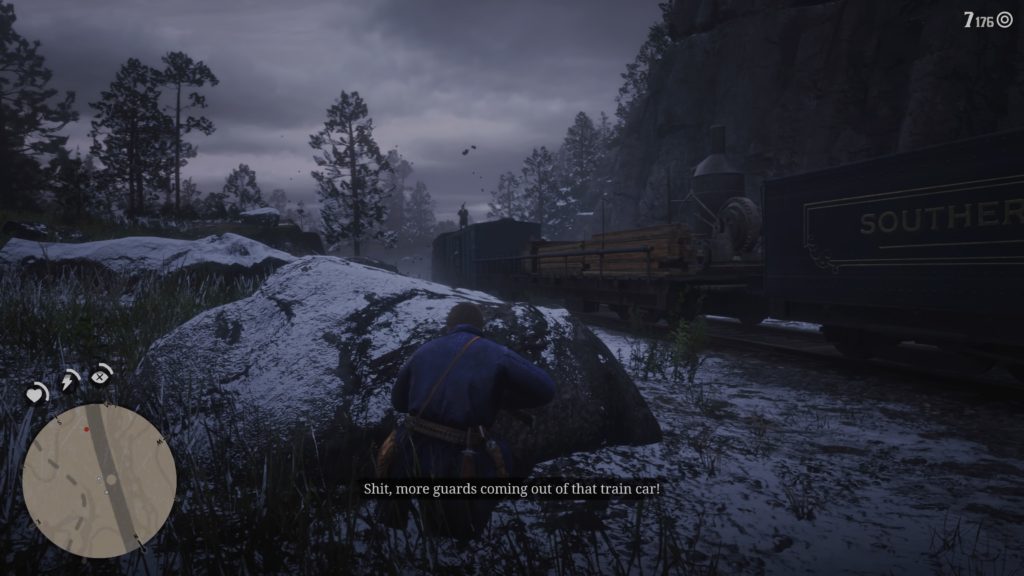 Stay in cover all the time

The Dead Eye is very useful during the shootout. While advancing, take the upper position on the left side of the train. It’s a small hill which offers the high-ground advantage.

After you clear the area, a cutscene is triggered and you’ll have to use dynamite to blow up the door of the final wagon.

Move forward to pick up the dynamite, then press R2/RT to place it and △/Y to light the fuse.

Step away from the door and after the explosion, enter and start looting. Take the brandy from the small table in front of you; inspect the letter on the roundtable and the drawer of the large table. 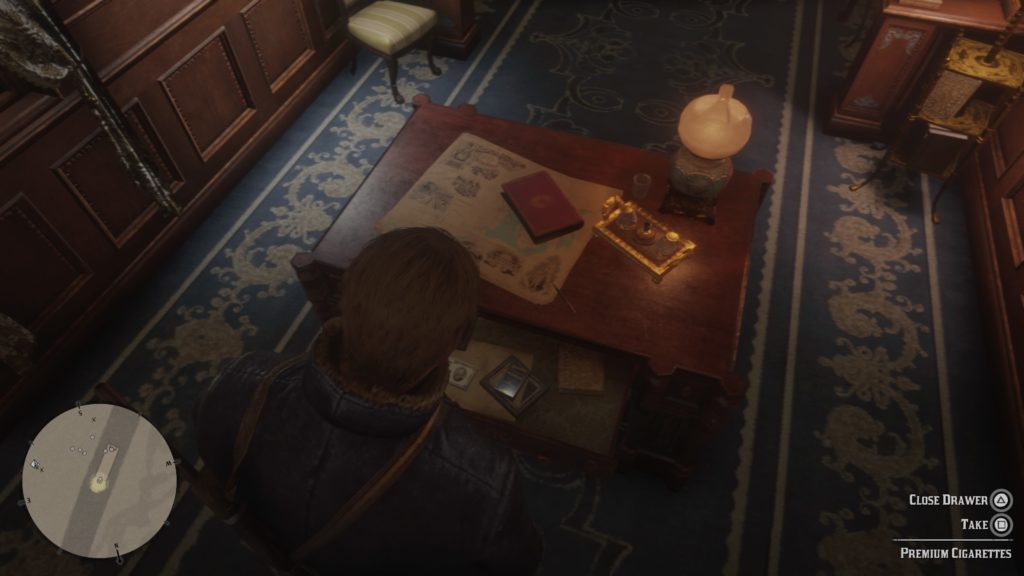 There is money inside, and a Cigarette Card. Also in the large cabinet with a fox on it, you will find a lockbox with bonds inside.

Once you get all these items, get out of the train and talk to Dutch. The final objective of this mission is to deal with the guards.

Arthur, do as you see fit, but remember that on your way back to the engine car, you should check all train cars for additional items or collectibles. Take your time, then also loot all corpses.

When you are ready, head to the engine car and start the train. As you return home, the mission ends. Need to rest or are you ready to start the last mission in Chapter 1 of Red Dead Redemption 2? Let’s do it, cowboy! Remember that we can be reached on Facebook, Twitter, and Instagram if you need additional help.