Far Cry: New Dawn Crawling from the Wreckage is the first story mission featured in the video game developed by Ubisoft Montreal for Xbox One, PlayStation 4 and PC.

Crawling from the Wreckage serves as an epilogue mission which introduces players to the story of Far Cry: New Dawn.

The introductory cutscene presents the events that occurred after Far Cry 5, from the perspective of Carmina Rye who was born the day the world collapsed.

“The Collapse” is a nuclear explosion which changed Hope County, and also killed a large number of inhabitants.

As Carmina Rye explains in the game’s intro, those who have survived had to retreat underground. Seventeen years later, the survivors began to emerge from their underground shelters to discover that the world outside changed, and was capable to support life once more.

Slowly Carmina along with other survivors started to rebuild Prosperity; a shelter where most survivors found a peaceful life.

Unfortunately, Prosperity also became a point of interest for the  Highwaymen, led by the Twins.

Under attack, Prosperity didn’t stand a chance against the Highwaymen. After the first attack, Carmina Rye realized that something had to be done and someone had to deal with the Twins once and for all.

Luckily there were other survivors as well, and Thomas Rush was just the man Prosperity needed. Helped by his Captain, he was traveling around the country helping people rebuild their homes.

Carmina’s mother, Kim Rye, sent her daughter to find Thomas Rush and ask for help. “But it all went horribly wrong…”

As the events unfold, you find out that the train used by Thomas Rush was ambushed by the Highwaymen. They didn’t kill you…or not yet.

Crawling from the Wreckage begins inside the train taking you and Thomas Rush to Hope County. You wake up to see Garett Barnes several steps away from you, asking for help.

Once Thomas and Garett free you, as Captain of Security you’ll have to escape the train, save as many survivors as you can, and escort Rush.

Before moving forward with this mission, you should know that although exploration is encouraged, the Crafting Materials, Weapons and everything else you loot while playing Crawling from the Wreckage, will not be transferred to the next mission.

This means that although you can spend time exploring the mission’s area looking for useful loot, the items you find will be removed from your inventory once you complete the mission.

Nevertheless, we’ll point out where to find some items of interest in the following videogame walkthrough.

The moment you gain control over your character, head forward and loot the backpack on the ground to find some Bougainvillea, Solvent, and Handgun Ammo.

On the right side, you’ll find a note which is, in fact, Garret’s Resignation.

Although the notes you find in Far Cry: New Dawn; don’t count as Collectibles, it is worth reading them because they can offer information on the game’s story, characters and sometimes even clues for Treasure Hunts. 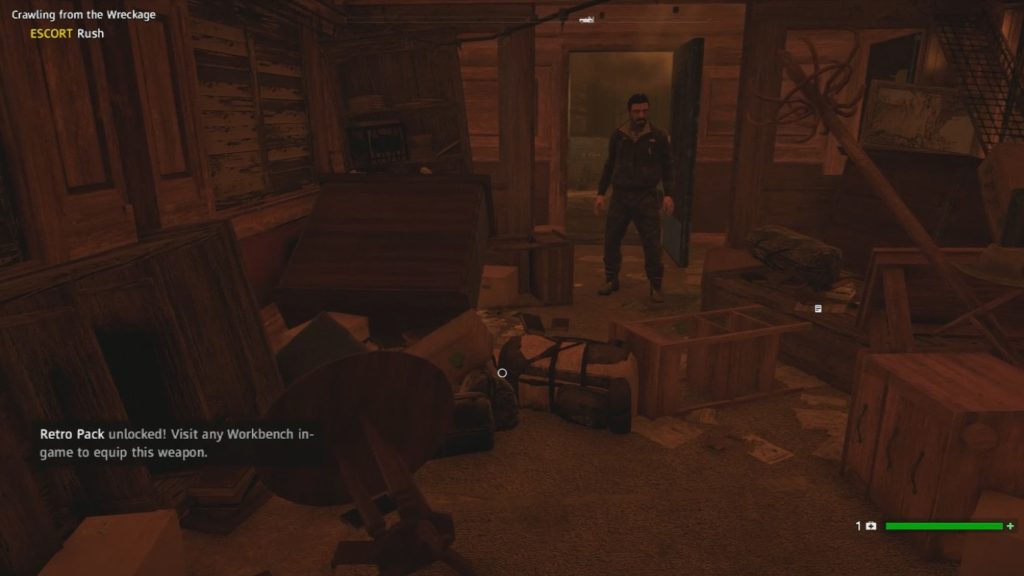 Loot the backpack and read the note

Exit the wagon, then head right, jump down and move forward until you see the tunnel’s exit.

Jump inside the wagon on the left and read Rush’s Journal page located on a wooden crate to your left side. Several steps away is another yellow backpack you can loot for more Bougainvillea, Copper, and Handgun Ammo.

Exit the current train cart and jump on top of the next one. Now, jump on the ground and enter this wagon to find a Throwing Knife, a shield and a yellow crate with more Copper inside.

Now, continue to move towards the yellow marker on your screen looking for a larger train cart (pictured below); where you should find a survivor asking for help. 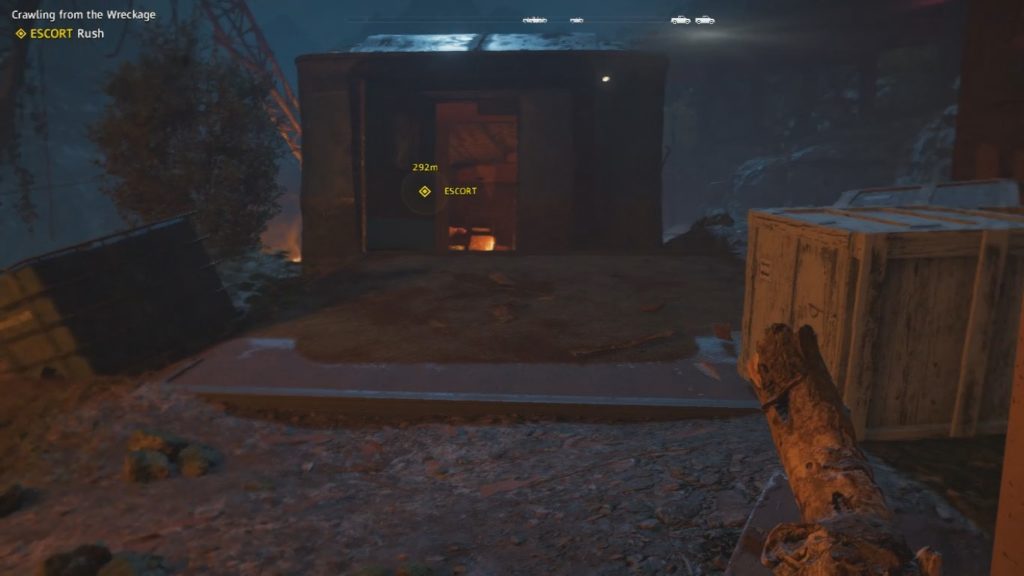 Check this wagon to find a survivor

Revive the woman, take the Medkit near her, then check the yellow crate several steps away on the left side. Inside this crate, you’ll find Black Powder and Solvent.

Now, exit the wagon, turn left and look for a Highwayman looting a corpse. 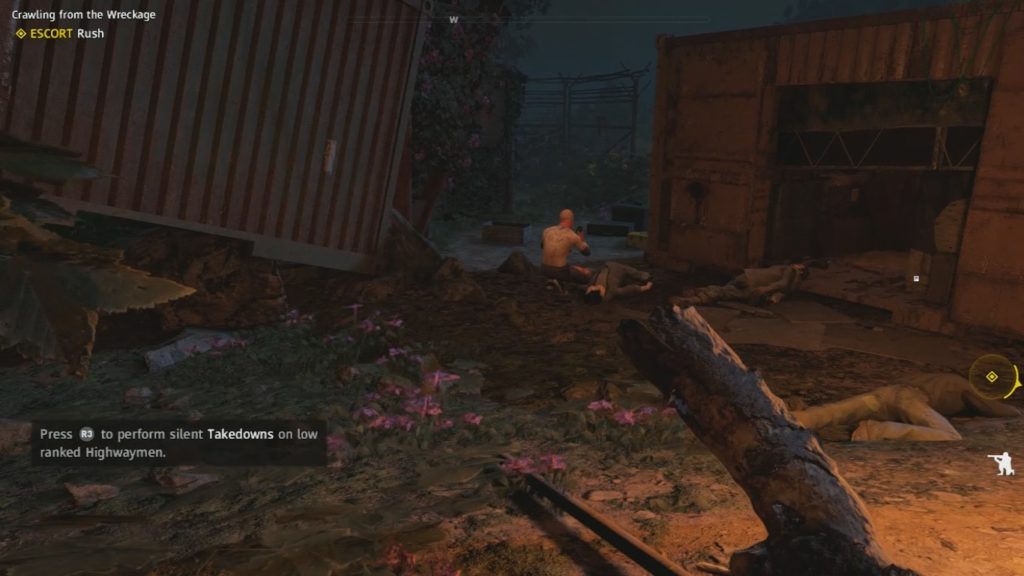 Silently take him down from behind, then strategically explore the area around him for more loot.  Inside the container on the right is a Security Note and Ammo.

Also, loot the corpse of the Highwayman to get the Rusty 1911, Copper, Solvent and Saw Launcher Ammo. In the small yellow crate near the corpse of your victim, you should find some Black Powder.

Remain crouched and head right around the partially suspended wagon to find another Highwayman beating a survivor. 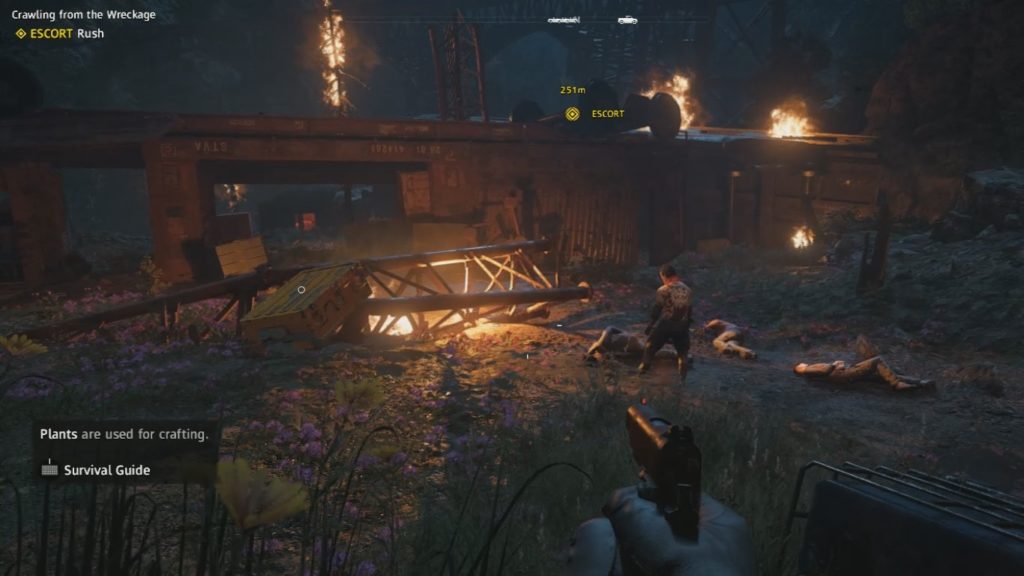 Save the next victim after you kill this Highwayman

Take him out silently then liberate the victim and loot the corpse of your target. Nearby is a dead survivor which has a Security Note you can read.

Next head left and enter the next wagon where you should see a Highwayman on the other side (pictured below).

On the right side of this wagon are a Farmer’s Journal Note and a yellow backpack several steps away from your enemy (left side).

Takedown the Highwayman, then look behind his location for Rank 2 Makeshift Bolted Pipe. 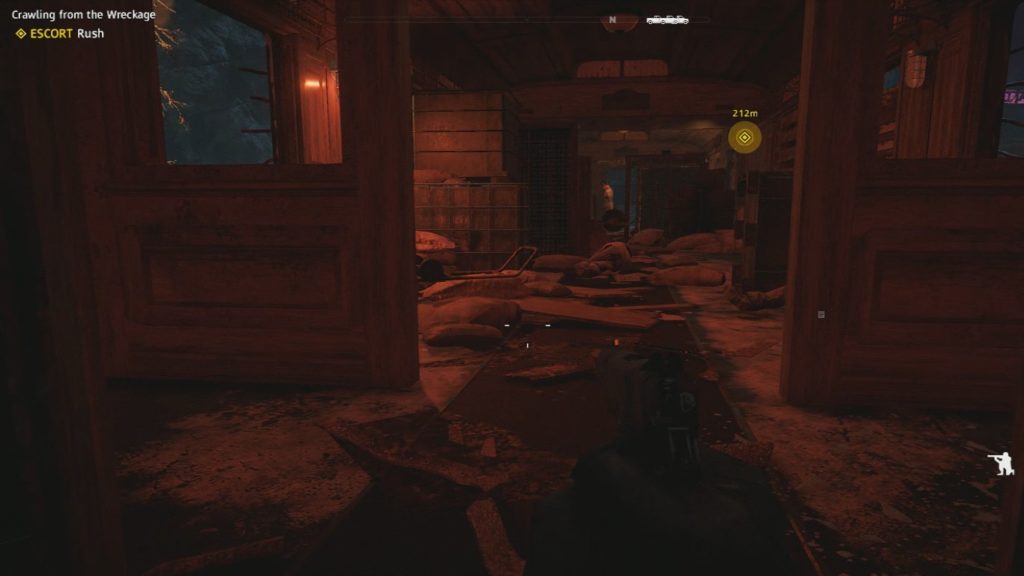 After you exit this wagon, head right to spot another enemy on the ground, painting a graffiti.

Take him out then turn around and take down the next two. 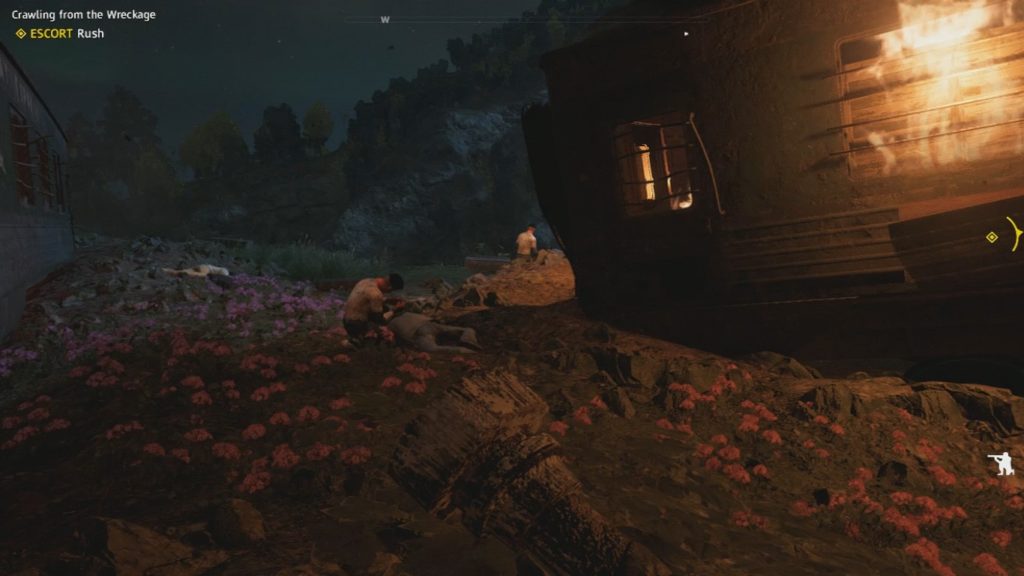 Take down the next two targets

Now, save the third victim and right in front of you, in a blue wagon you should see the Armory Car. 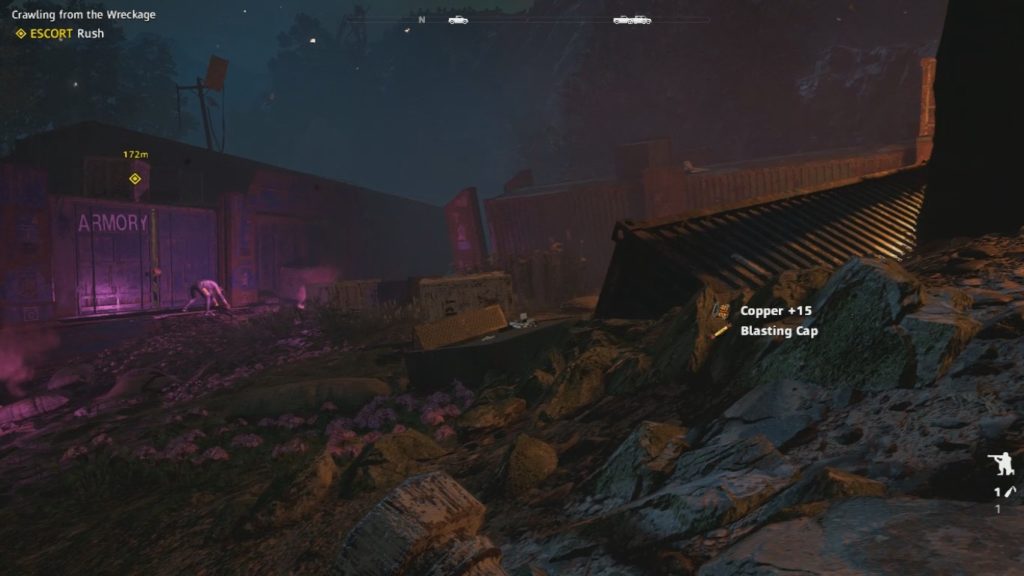 Clear the area around the Armory Car

On the right side, you will also spot another survivor. When you try to save him by killing the Highwayman, your companions might get spotted.

Depending on the situation, you have to adapt. If they are spotted, quickly kill the Highwayman in front of the Armory Car, then enter the wagon and get a better weapon. Inside you should find a Rusty AR-C, a Rusty SVD and even a Rusty RPG-7.

If you don’t get spotted, kill the 3 Highwayman around this area and then check the Armor Car.

Regardless, on how events unfold, you’ll receive a new objective.

Escape to the River

When you get this objective you’ll have to follow Rush towards the marker on your screen. 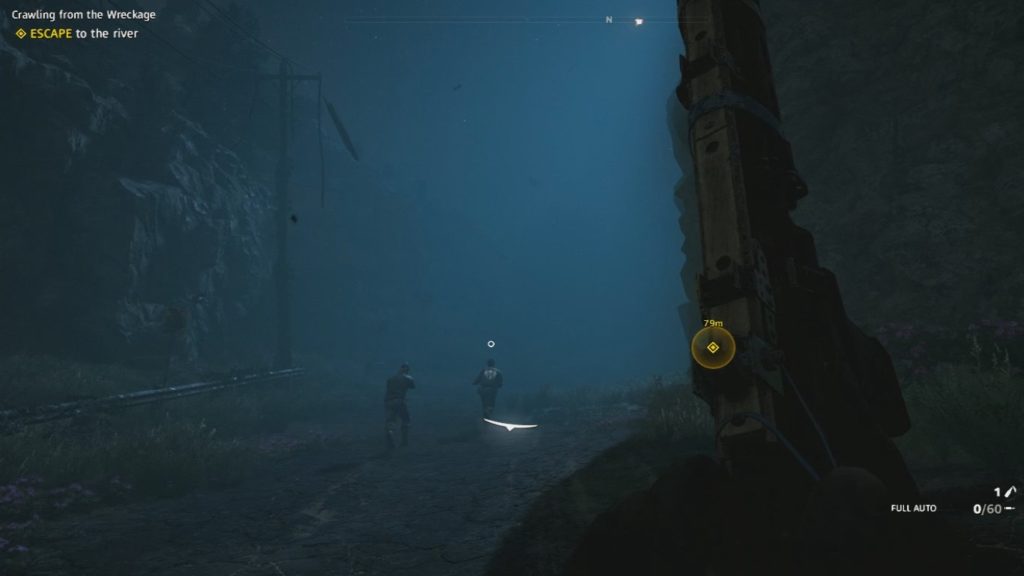 Head to the river

The best approach here is to simply ignore your enemies and start running towards your objective which is close to a river.

When you are nearby, you’ll trigger the final cutscene in this mission. Unfortunately, not all of you will make it alive. In order to keep our walkthrough free of spoilers, we’ll let you discover what happens at the end of Crawling from the Wreckage.

Did you manage to complete Crawling from the Wreckage? Share your tips, hints, and strategy in the comments section below or join us on Facebook, Twitter, and Instagram where we discuss the latest video game releases, news and trailers.