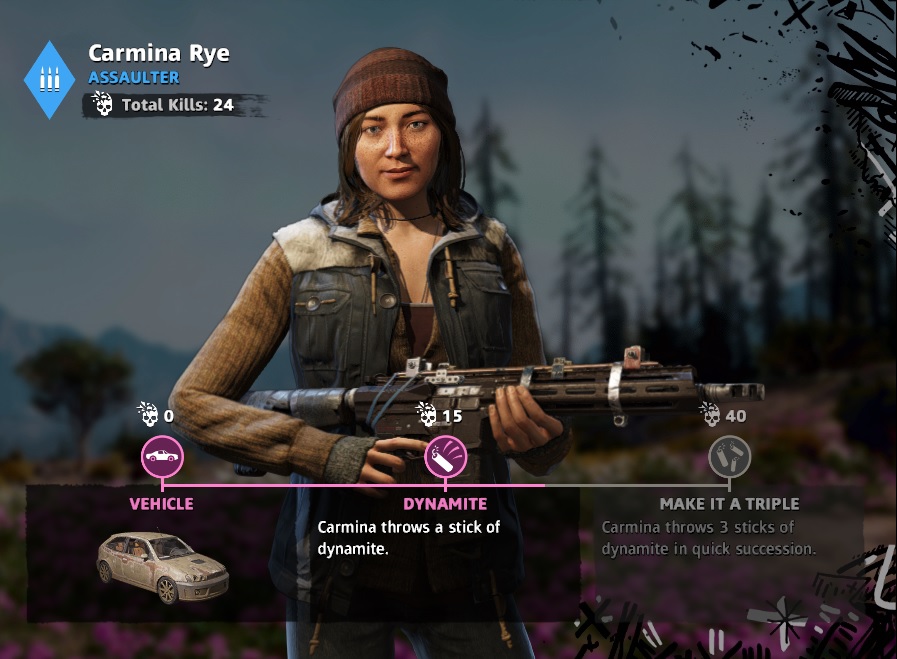 Carmina Rye is a Gun for Hire featured in Far Cry: New Dawn, the videogame published by Ubisoft for PlayStation 4, Xbox One and PC.

Although she also appeared in Far Cry 5, as a supporting character; Carmina Rye is the main character in Far Cry: New Dawn.

She was born the day the world ended and she saw the sun for the first time when she was six.

In Far Cry: New Dawn you can recruit her to assist you when going after the Twins. Her mother, Kim is the leader of Prosperity.

How to Unlock Carmina Rye

By completing the said mission, you’ll reach Prosperity where you’ll have the chance to customize your character and you’ll be introduced to Carmina’s mother, Kim.

After you finish Gear Up story mission, Carmina will be automatically added to your Roster.

How to Recruit Carmina Rye

You can recruit Carmina from the game’s Roster.

Select Carmina Rye and press the corresponding button to assign her as your Gun for Hire.

How to Upgrade Carmina Rye

As an assaulter, Carmina Rye uses an Assault Rifle as her primary weapon, but you can improve her skills, thus allowing her to better assist you.

In order to upgrade Carmina Rye in Far Cry: New Dawn make sure that you assign her as your Gun for Hire and help her get the required number of kills listed above.

You can do that by weakening your enemies, then let Carmina give them the final shot.

Additionally, you can increase Carmina’s rank by upgrading the Training Camp at Prosperity.

Borderlands 3 Inventory Size Guide: How To Get More Space
June 18, 2020