You might not believe it but Death Stranding is actually inspired by President Trump to a certain degree. This has been confirmed by Hideo Kojima himself. Death Stranding has a relation with Trump, America and the European Union. We do not know the details but that is very interesting indeed.

Kojima mentioned that the map of the game does not look like the map of America because he wants the player to think about where they are from when they play Death Stranding. Here is what he had to say about Death Stranding and its relation to Trump:

It’s about America, but I made that map deliberately not correctly America. Maybe it looks like Japan from that angle. I want people to not think ‘America,’ but ‘where you are.’ Because it depends on who is seeing it. And of course, it’s in the future, and everyone’s connected by Internet, but everyone is fragmented. That’s kind of a metaphor as well.

This does sound a bit vague but then again we do not know a lot about the game and we will have to wait until it comes out to figure out what it is all about. Kojima has already mentioned that even he does not fully understand what the game is about so it is mysterious, to say the least. The game is coming out in November so we should find out what it is about soon enough. 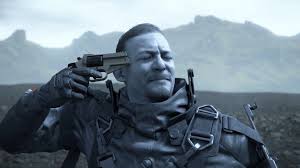 We do know that we play as Sam who is trying to connect people in one way or another. This could be a metaphor but then again, we have seen footage of him walking around and trying to fix communication so it could literally be that as well. Kojima went on to mention the following about the game:

When you connect, you can use UCA services, but at the same time, they’re retrieving your information 24 hours a day. It’s like 1984. Some people may not like that, and say ‘I’m not going to connect to UCA, because we’re going to repeat the same thing that we did.’ Like Trump, or the EU, these things. It’s a metaphor.

All this is very interesting indeed. Kojima also responded to people calling the game a walking simulator and if you are interested in reading about that then you should check out that article as well. Other than that, Troy Baker has claimed that the game is going to be a statement. Only time will tell whether or not that is indeed the case.

Let us know what you think about Death Stranding being inspired by Trump and whether or not you are interested in playing the game when it comes out.

Death Stranding Is Going To Be A Statement Says Troy Baker
July 31, 2019

Hideo Kojima Explains What Makes His Game So Different
September 23, 2019