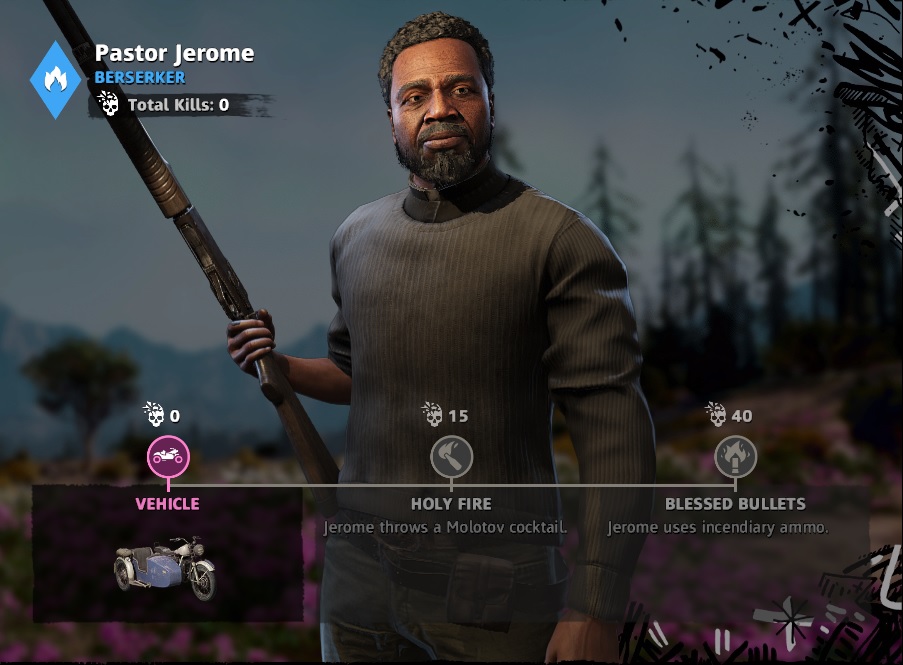 Pastor Jerome is a Gun for Hire featured in Far Cry: New Dawn, the videogame published by Ubisoft for PlayStation 4, Xbox One and PC.

He first appeared in Far Cry 5 where he was a Roman Catholic priest in Hope County and a friend of Joseph Seed.

The former war veteran and sergeant Jerome Jeffries returns in Far Cry: New Dawn as a Gun for Hire looking to help the Captain and Prosperity.

How to Unlock Pastor Jerome

In Far Cry: New Dawn, Pastor Jerome can be unlocked by completing the side mission named Jerome Comes Home.

Although Pastor Jerome is being held captive at Kellet’s Howl (pictured below), the mission begins at Ramone’s Lookout, and it ends at Rye & Daughter Aviation.

How to Recruit Pastor Jerome

You can recruit Jerome Jeffries from the game’s Roster.

Select Jerome and press the corresponding button to assign him as your Gun for Hire.

How to Upgrade Pastor Jerome

A berserker, Pastor Jerome uses a shotgun as his primary weapon, but you can improve his skills; thus allowing him to better assist you.

In order to upgrade Pastor Jerome in Far Cry: New Dawn make sure that you assign him as your Gun for Hire and help him get the required number of kills listed above.

You can do that by sending him to kill specific enemies after you tag them.

Additionally, you can increase Jerome’s rank by upgrading the Training Camp at Prosperity.