Scurrying your way through The Legend of Zelda series is an experience in itself. Despite subtle differences and archetypes between each game, the trend of Sheikah Weapons seems to be the same through and through.

So, what exactly makes these gears so unique, and why do they have a single cutting edge? Let’s find out!

The Sheikah Weapons in The Legend of Zelda: Breath of the Wild are created with the help of ancient techniques. Their sharpness protrudes from their single cutting edge, and they’re capable of cutting down the mightiest of enemies in the early-to-mid game.

Needless to say, the Sheikah Gears aren’t just tools for mass destruction. Rather, they can also be used to defend.

The Breath of the Wild possessed a Sheikah go-to for almost every checkpoint in the story progression. With that said, let’s take a deeper look into these weapons in order to find out if they’re the one for your build or not!

All Sheikah Weapons In The Legend of Zelda: BOTW 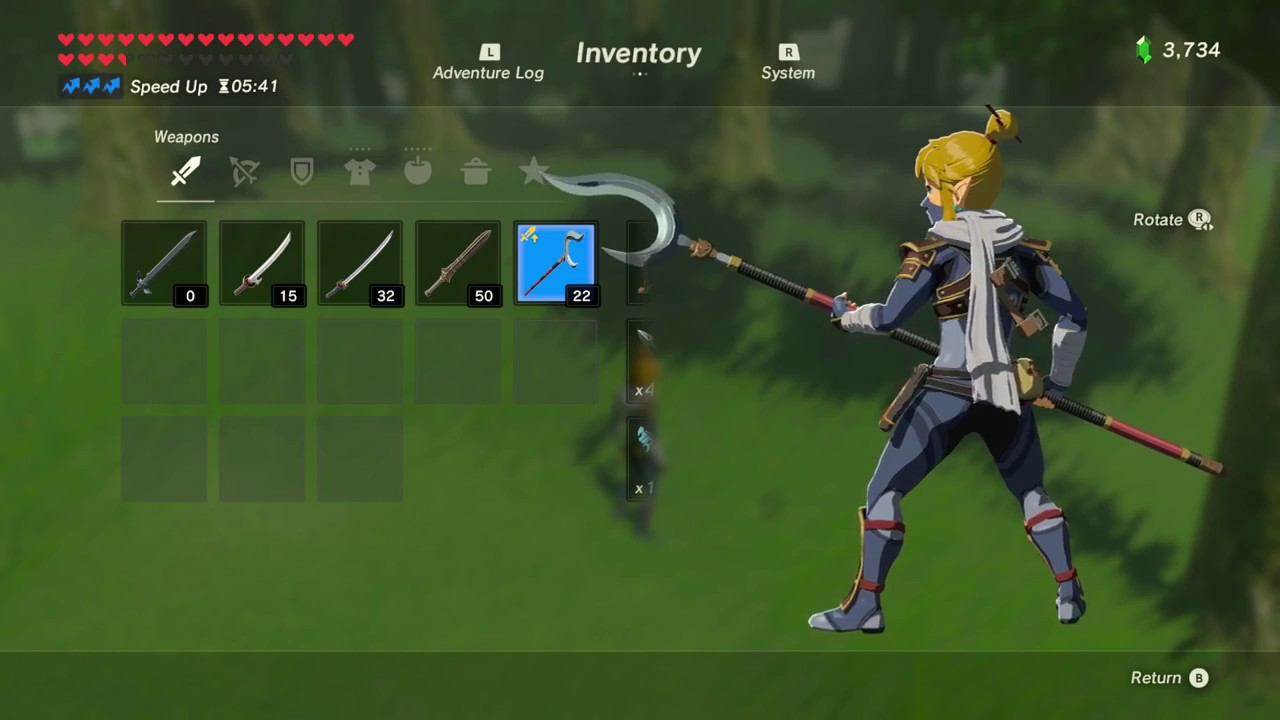 The Sheikah weapons are said to be molded and manufactured using the ancient sacred teachings passed from tribe to tribe. While their lethality can be questionable at times, they’re still an extremely good weapon option to go for.

With that being said, here’s a list of every Sheikah weapon available in The Legend of Zelda: Breath of the Wild:

This is a Kodachi-styled blade that has been a by-product of the Sheikah tech. While the passed recipe has been kept elusive to the world, the forging method yields some of the sharpest edges known to man.

This blade possesses a base attack power of 15 and can be obtained from a treasure chest located within the Suma Sahma Shrine.

Consequently, you can also loiter your luck around the Wahgo Katta Shrine in case the first location turns out to be empty. Aside from the mentioned hotspots, you should also give the treasure chests in the following locations a go:

This Sheikah blade has a special emblem etched on the metal, which can be identified from a single glance.

It is generally a good weapon choice to go for in the early stages of the game since it lacks damage and durability the later you progress into the game. While you could consider enchanting it, the costs outweigh the pros.

This longblade features a base attack damage of 32 and is generally considered an enhanced version of the Eightfold Blade. While it benefits heavily from certain weapon bonuses, it’s generally only used in the early to mid portion of the game.

Much like the Eightfold blade, this weapon can also be obtained from Treasure chests. While the areas and their average difficulty are significantly greater than before, it’s still out runnable – if push comes to it.

Having said that – you’d generally want to look in the following areas in order to obtain the Eightfold Longblade:

Since these are the rare form of the base Eightfold sword, you will have a much harder time obtaining them. However, the Recovered Memory quest does have an unnamed Sheikah warrior carry the Eightfold Longblade with him.

While the charging method of the blade generally differs from the usual spin animation, the classification of the attack and the damage dealt still belongs in the same category. The animation change is just there to honor the Japanese sword drawing style.

Despite being shorter in length than the Eightfold Longblade, this unique double-edged sword possesses a total of 50 points in damage.

This bonus can be increased to greater heights with the help of weapon bonuses. While it’s supposed to be a double-edged sword, only your enemies will be facing the full brunt of it.

While the Edge of Duality was supposed to be an alternative for the Hyrule tribes that are unknown to the way of the single-edged swords, it has made its way as a by-product of ancient Sheikah tech regardless.

Plus, it’s a generally great weapon for mid-game – so there’s no reason to leave it hanging – unless you have a better weapon at hand.

Unlike the previous ones in this list, the Edge of Duality has sufficient durability. Therefore, there’s no need to worry about sustain – or anything of that sort, unless you’re really trying to make it scream.

Needless to say, the Edge of Duality is by far the easiest to obtain as long as you’ve cleared a significant portion of the mid-game map.

Having said that, you can obtain Edge of Duality from the following locations:

The blade itself is brown in color – which is quite unusual for such a sturdy weapon. Upon equipping it, Link will store the weapon in his back at torso length. In this state, the gold Sheikah emblem is still visible, although it’s much harder to identify.

The Serpentine Spear is a uniquely shaped Sheikah weapon that features a long melee range along with a decent amount of early game damage. It essentially replaces the Eightfold Blade in terms of stats in order to diversify your options.

Along the way, you will meet a lot of monsters wielding this weapon. Since the attack damage can vary based on weapon perks, it’s best to stay vigilant regardless.

If the Serpentine Spear is dropped somewhere, nearby enemies can still pick it up to defend themselves if they’re made aware of Link’s presence.

On that note, this weapon is generally found in the hands of monsters instead of treasure chests. Thus, it’s best to be prepared for a grueling fight since begging for the weapon won’t yield any results. With that said, here are some hotspots for the Serpentine Spear:

This weapon tends to be similar in power to the Dragonbone Boko Spear. However, it boasts a higher durability level that can withstand many tough battles to come.

Luckily, the mobs wielding this weapon are spread throughout the map. Therefore, you won’t have to worry about running out of replacements.

This is the only pure ranged Sheikah weapon that can be obtained by Link. While its attack power is nothing special, the range difference makes it a significant contender in the early game.

However, ranged weapons are relatively hard to pilot in The Legend of Zelda: Breath of the Wild. Therefore, your mileage may vary.

In terms of raw numbers, you can expect the base attack power of the Phrenic Bow to stay around 10. While this can be increased by implementing weapon bonuses, it’s generally not worth the time. With that being said, you can obtain it from the following areas:

The method of piloting a bow differs a bit from traditional swords and spears since you need to aim the weapon in order to land a shot. While drawing the bow and arrow, Link will automatically shift into a first-person perspective in order to aim as accurately as possible.

The mechanic follows the standard structure of arrow shooting present in the gaming world. Therefore, you will get used to it in no time – if not instantly. The Phrenic Bow is made to be durable enough to sustain through most of your early game battles.

Therefore, you won’t need to find replacements as often – compared to the Duplex Bow.

Shield of the Mind’s Eye

This is the final Sheikah Weapon-esque shield that boasts a defensive rating of 16. While it’s technically used for defensive purposes, it’s still a decent wooden-made shield that can keep you safe against a multitude of attacks.

Pair it with a decent off-hand weapon, and you’re off to a good start in The Legend of Zelda: Breath of the Wild. Since it’s generally advisable to skip the shield route as a starter, the weapon itself can be a rare find.

Luckily, you can find a shield on an enemy campsite in the Equestrian Riding Course at a random interval. Another popular location is the Suma Sahma Shrine, whilst the final and probably the most elusive spawn location is the Toh Yahsa Shrine.

Similarly to the bow, the enemies have a decent chance of grabbing the weapon for themselves if they find Link lingering around. Therefore, it’s best to go as stealthily as possible if you want the shield to be intact by the end of the grueling showdown.

While it does not attract lightning, it’s still quite vulnerable to fire-based damage. Consequently, you wouldn’t want to take it with you near volcanic activities – unless you want to end up burning yourself.

All in all, the Sheikah weapons are meant to serve their purpose in the early portions of the game.

Since they’re generally made to be durable, you would be good to go as long as you have one in your inventory. However, this also means that you’ll be sacrificing some other stats in the form of health and defense.

Most of the Sheikah don these weapons with pride. And Rightfully so, they definitely live up to their name and fame. While you’re generally going to use Master Sword in the late game, using the Edge of Duality as a placeholder won’t be bad, either.

Breath of the Wild Sheikah Weapons