Red Dead Redemption 2 Lion’s Paw Trinket is one of the unique items that can be crafted only by completing a specific mission in the video game developed by Rockstar Studios.

Nevertheless, the RDR2 Lion’s Paw Trinket is worth crafting as it increases your stamina XP gains by 10%.

This means that when you have the Lion’s Paw Trinket in your inventory; you’ll be able to level up Arthur’s Stamina Core much faster.

Here is how to craft the Lion’s Paw Trinket in Red Dead Redemption 2.

1x Lion Paw – You can obtain it by completing He’s British, of Course. This  Stranger Mission becomes available in Chapter 3 of the video game. The Lion Paw is an item you will find when you loot the large lion at the end of the said mission.

How to Craft the Lion’s Paw Trinket:

The Lion Trinket in Red Dead Redemption 2 doesn’t require any additional crafting materials besides those listed above.

Once you get the paw of the lion you kill during He’s British, of Course (assuming you have the necessary funds) head to a Fence and get the trinket crafted by talking to the shopkeeper. You should see it listed in the Trinkets section. 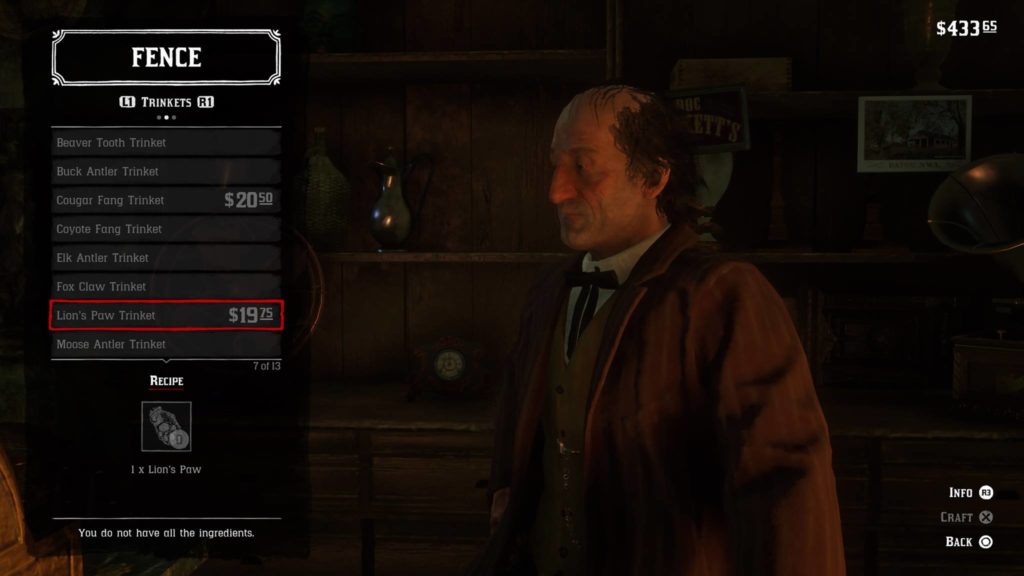 How to Use the Lion’s Paw Trinket:

As you probably already know, equipping the trinkets in Red Dead Redemption 2 is not necessary in order to benefit from them.

The same rule applies to this specific trinket which you can keep in your inventory during your journey through the west. Once purchased it allows reaching Arthur’s maximum level of Stamina a little faster than you would normally do without it.

Basically, each time you perform an action that gives Stamina XP, the trinket awards you a 10% bonus; thus helping you unlock all levels from Arthur’s Stamina core, quicker.

Need help in Red Dead Redemption 2? Drop your questions in the comments section below, or send them via our social media channels (Facebook, Twitter, and Instagram).

Mass Effect Legendary Edition Ashley Guide: How To Romance
May 19, 2021