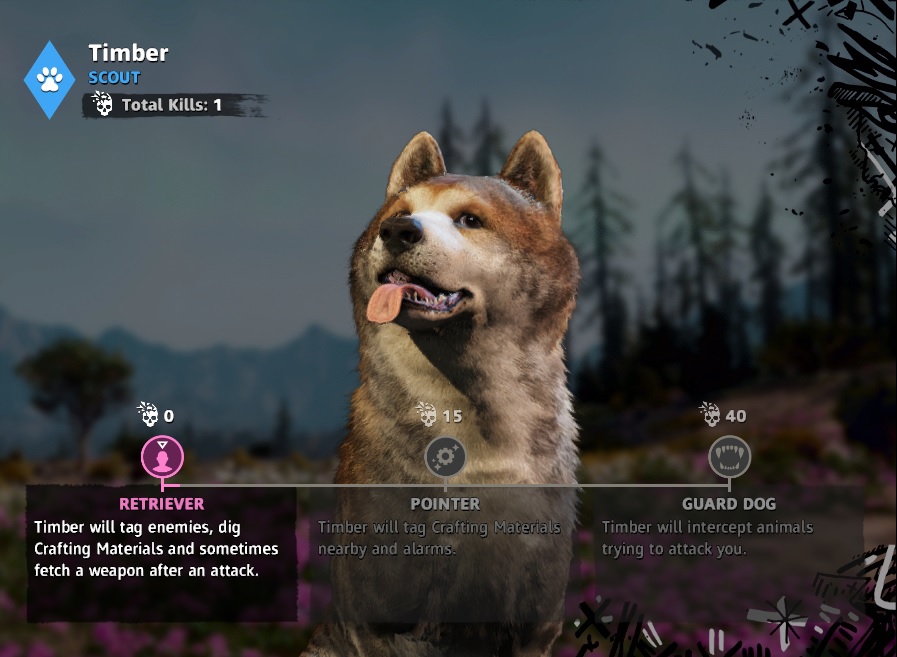 Timber is a Gun for Hire or Fang for Hire featured in Far Cry: New Dawn, the videogame published by Ubisoft for PlayStation 4, Xbox One and PC.

Timber can be unlocked early in the video game, by completing a very accessible side-quest. Because of this, it is a good idea to find him the moment you finish Gear Up story mission.

Unlocking Timber will give you an advantage when liberating Outposts or while hunting, as he can mark alarms, enemies and nearby animals.

How to Unlock Timber

In Far Cry: New Dawn, Timber can be unlocked by completing the side mission named Man Eat Dog World.

He is located at Meatfort (pictured below) where he was captured by the Highwaymen.

How to Recruit Timber

You can recruit Timber the dog from the game’s Roster.

Select Timber in the lower left corner and press the corresponding button to assign him as your Fang for Hire.

How to Upgrade Timber

A scout, he uses his senses to spot nearby Animals, Crafting Materials and enemies, but you can improve his skills, thus allowing him to better assist you.

In order to upgrade this companion in Far Cry: New Dawn make sure that you assign him as your Gun for Hire.

You don’t have to help him too much as he can take care of himself and score the required number of kills; thus ranking up quite fast.

Additionally, you can increase Timber’s rank by upgrading the Training Camp at Prosperity. When you do that he will become even tougher and he will also deal increased damage.