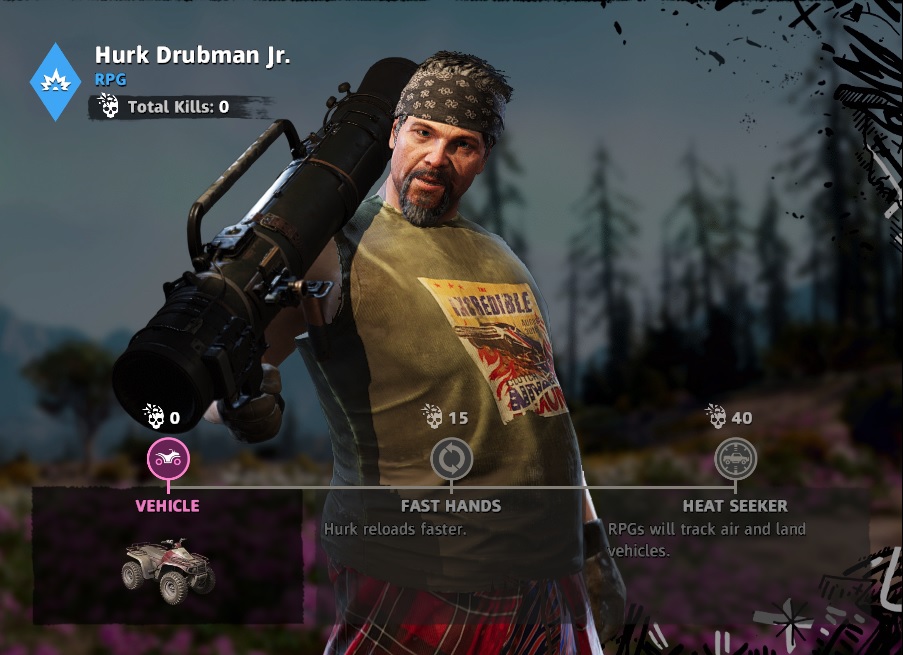 Hurk Drubman Jr. is a Gun for Hire featured in Far Cry: New Dawn, the videogame published by Ubisoft for PlayStation 4, Xbox One and PC.

The son of Adelaide Drubman and Hurk Drubman Sr., Hurk first appeared as a non-playable character in Far Cry 3.

In Far Cry 4, Hurk is available only in co-op, while in Far Cry 5 he is a Gun for Hire.

Now, the latest title in Ubisoft’s series of video games brings back Hurk to help the Captain free Hope County and take out the Twins.

How to Unlock Hurk Drubman Jr.

In Far Cry: New Dawn, Hurk can be unlocked by completing the side mission named Days of Blunder.

Hurk Drubman Jr. is located at Shitlord’s Tunnel (pictured below) and he’ll be waiting for you to help him get revenge on the Highwaymen.

Once you finish the mission, you’ll unlock both Hurk and his Elite Car, named The Gifthorse.

How to Recruit Hurk Drubman

You can recruit Hurk from the game’s Roster.

Select Hurk and press the corresponding button to assign him as your Gun for Hire.

How to Upgrade Hurk Drubman

A heavy-weapon fighter, Hurk Drubman uses an RPG as his primary weapon, but you can improve his skills, thus allowing him to better assist you.

In order to upgrade Hurk in Far Cry: New Dawn make sure that you assign him as your Gun for Hire and help him get the required number of kills listed above.

You can do that especially by taking him with you when liberating Outposts.

Additionally, you can increase Hurk’s rank by upgrading the Training Camp at Prosperity.

Destiny 2 Vault of Glass Raid Templar’s Well Oracles Guide: How To Destroy
May 26, 2021

Assassin’s Creed Valhalla Norway Guide: How To Go Back
February 4, 2021