The Witcher 3: Wild Hunt has a plethora of ongoing quests and events that are seemingly created to confuse the players. While there’s an arguably hefty reward at the end of every tunnel, you need to be familiar with the know-how in order to reach it.

This is where Novigrad, Closed City differs from the regular questlines. It is a two-part quest that promises good rewards depending on your choices. It’s more like a side quest that can be completed whenever you want. However, choosing to do it first is a wiser decision.

Amongst all the razzles and dazzle of Novigrad, you will only have to focus on finding your way through. Luckily, that’s quite easy to do as long as you know a few tricks and shortcuts. With that said, let’s talk about all the ways through which you can complete Novigrad, Closed City quest.

What Is Novigrad, The Closed City Quest?

The Novigrad quest becomes available for taking once you’ve completed A Matter of Life and Death. It is located in the Northwest vicinity of Hierarch Square and can be initiated without any major prerequisites.

Since it’s a secondary quest, you’d be fine skipping it unless you’re aiming to witness everything The Witcher 3: Wild Hunt has to offer. With that said, the quest mainly revolves around two groups with each having its own part of the story.

Since you will be looking to maximize your rewards, it’s in your best interest to encounter the opposing groups since the second/first part will be reactivated regardless.

Since it is a two-part quest, you have the freedom to decide whether you want the bandits to be your first part or if you want to see Lussi first. Since it won’t really impact the outcome choices, you can choose either without having to worry about anything.

Having said that, let’s go with the latter to see where that leads us:

The quest will start from St.Gregory’s street in Novigrad. While walking, Geralt will be met with the woman identifying herself as Lussi. Once the quest has been initiated, Lussi will begin narrating the story of her haunted home, after which – Geralt of Rivia will follow her to the haunted house. 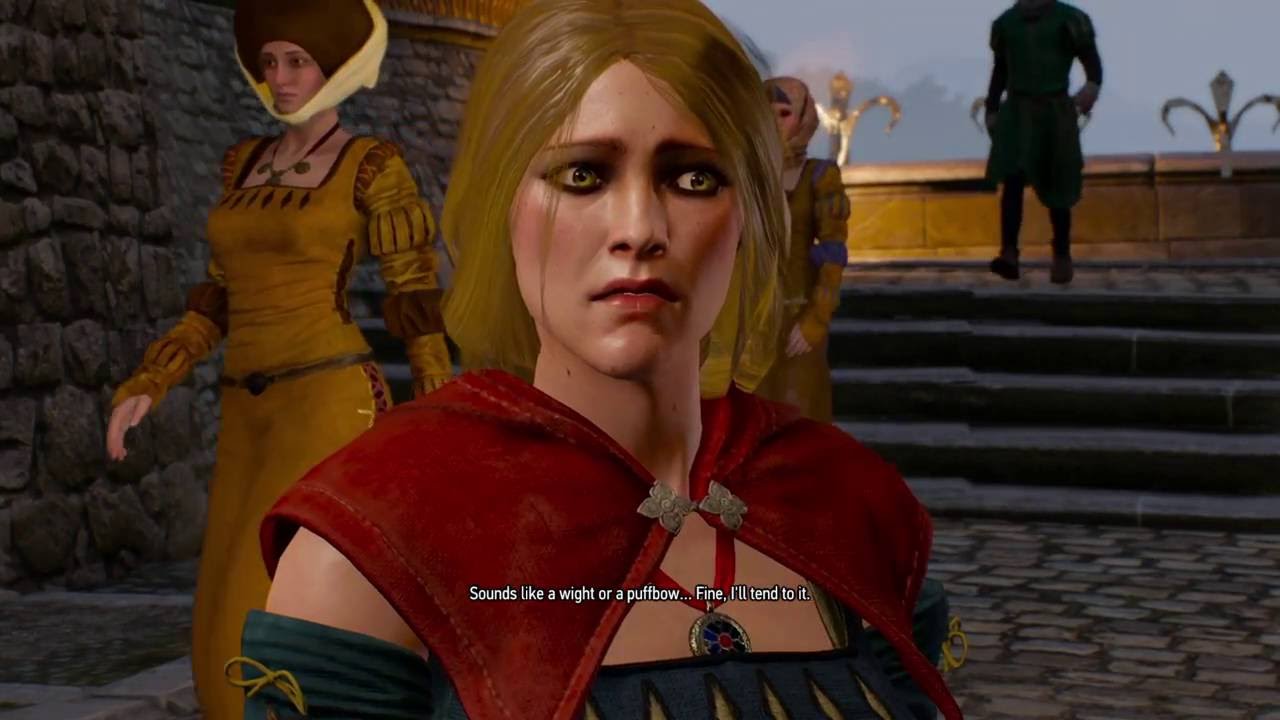 Once you head into the house, you will be met with two witch hunters waiting in ambush. As you might’ve guessed, a battle will ensue. Luckily, the ambush is rather poor, thus you will be able to defeat them quite easily as long as you corner them for a barrage of melee attacks.

After this short interaction has passed, Geralt will question the woman for leading him into the trap. In a fit of panic, she will hand over the keys to a treasure. After that, Geralt will being to inspect the bodies of the dead with hunters in order to find a warrant that states the identities of a former trio of bandits.

In this warrant, Lussi is mentioned the Fox hiding on Temple Isle. As for the other two, the identities are not quite clear (unless you’ve completed the second portion beforehand). The first person is called Fritz, while the other is called Walter.

Fritz was last sighted near the Crooked House, whereas Walter was seen in the Lacehalls located close to the Putrid Grove.

Your mission as Geralt is to find the two fellows in order to obtain the remaining keys to the treasure.

Since both locations will be marked on the map, you can simply follow the road in order to find his house. For reference, it will be located at the cross-section of the following areas:

Once you’ve located the house, simply head inside and roam around on the same floor until you find a dead body. Upon inspection, Geralt will find the body to be Fritz’s – with the assumption that the deed was done by the witch hunters.

Head to the second floor and locate a torch lighting sport (as instructed by the quest indicators). Upon ignition of the torch, a pathway to a secret chamber will be revealed. If you haven’t taken Walter’s keys, then it’s better to mark the area before heading inside. 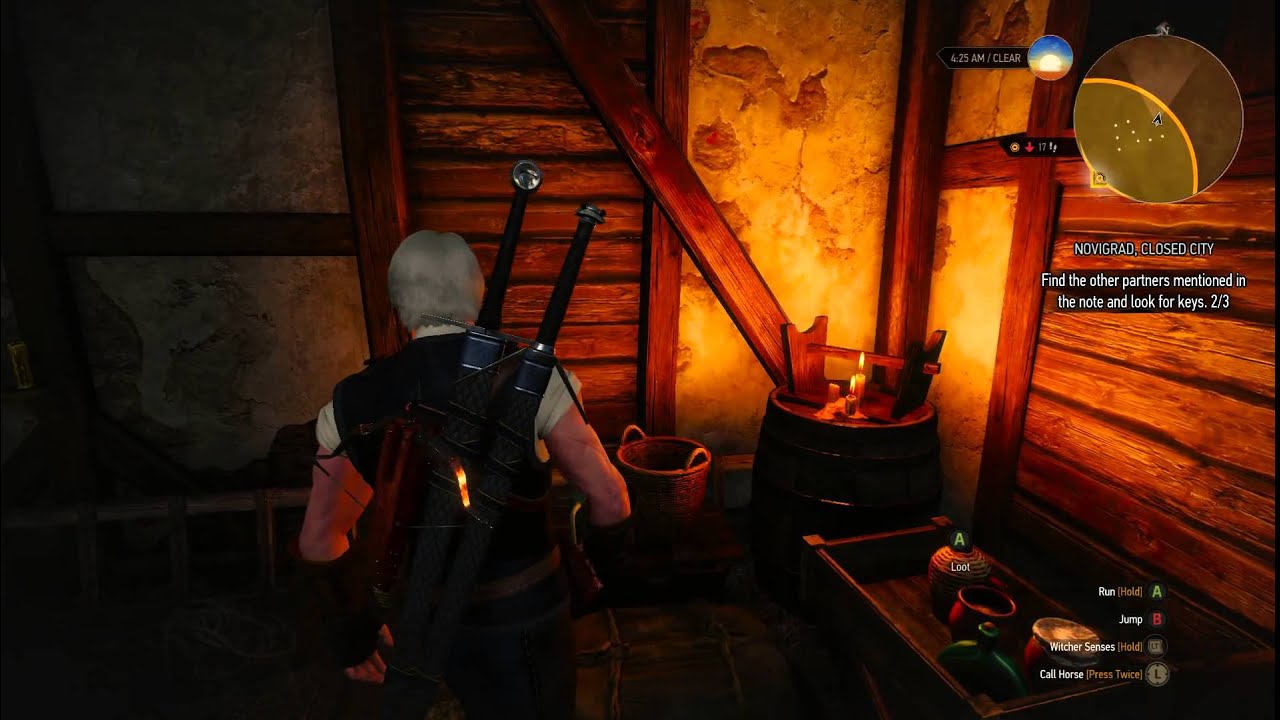 Within the inside of the compartment, you will find a key and a letter along with a safe that has three keyholes. If you possess Walter’s key, then you can simply put all the keys inside and wait for the safe to open. In the usual scenario, however – you will be mainly looking to grab the key.

Once done, click on the letter in order to read it since it will provide the background to the entire quest. As described in the letter, the main intention of this quest is to make you find all three keys in order to insert them into the holes for the treasures.

Initially, it was supposed to be Fritz, Walter, and Lussi’s, but contentions between the groups have muddied the waters.

Once you’re done with Fritz, it’s time to head to Walter. While his location isn’t as concrete, you will be able to locate him near Putrid Grove (as indicated by the mark on the map). He will be seen banging frantically at a door.

As you observe him from afar, the poor fellow will be targeted by two witch hunters trying to seal the deal. Your main job here is to defend him in order to obtain the final key. As you might’ve guessed, the quest will be over if you fail to defend him.

Therefore, make sure to prioritize him over killing the witch hunters. After the defense is successful, he will hand over the keys as a thank you for saving his life. Since you have the three keys, you can just go back to Fritz’s house (marked previously) in order to open the safe. 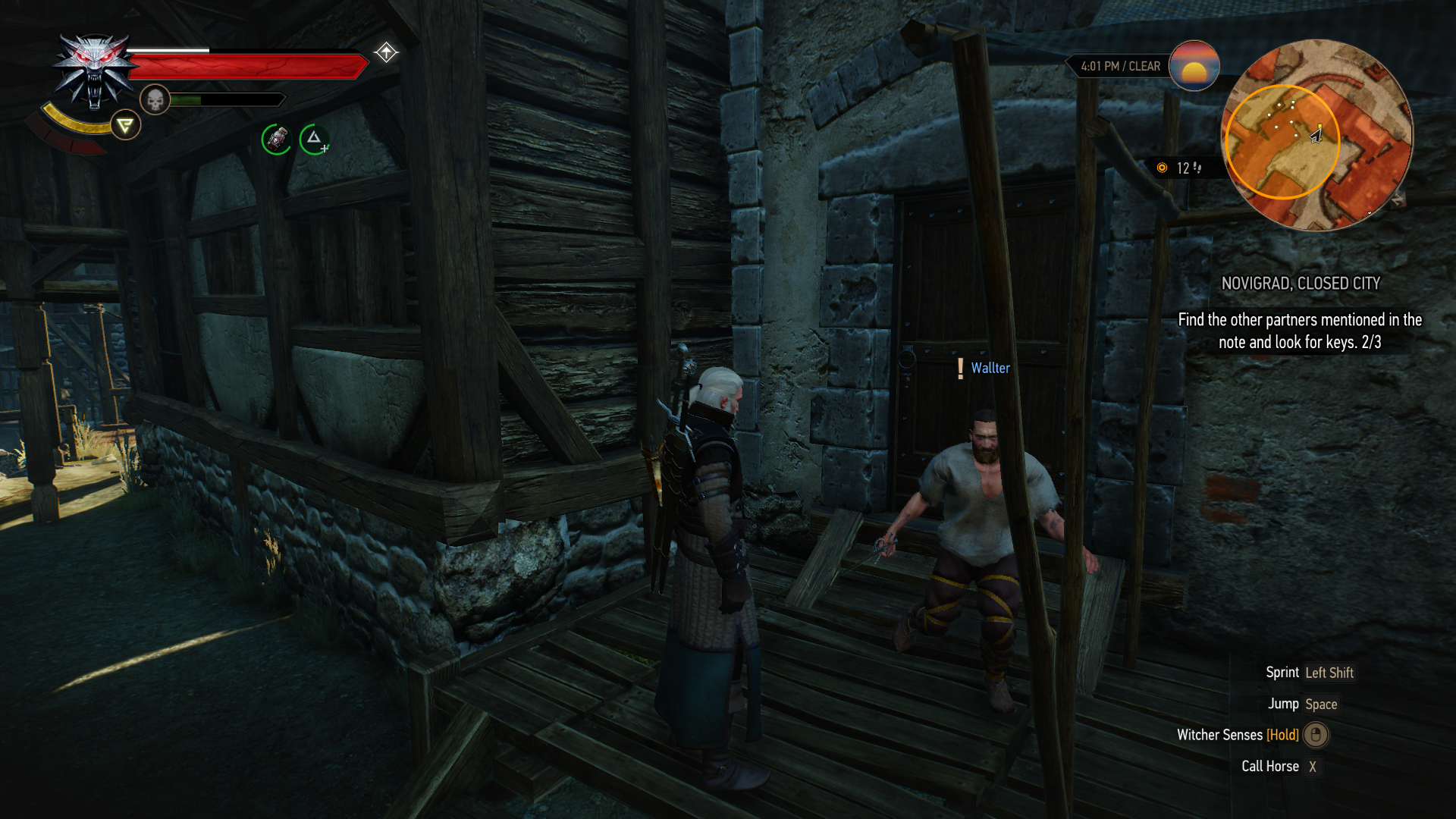 Once you’re back, simply insert the keys into the locks and wait for the safe to open. Once you claim the reward inside, this portion of the quest will be considered finished. Therefore, you’re supposed to head to the second portion in order to complete the entirety of the quest for good.

If you’ve already met the bandits along the way, the quest completing will simply reset the event. Therefore, it’s best if you deal with them along the way in order to earn extra pennies.

Once the first part is over, you can head to the northwest of The Golden Sturgeon. For those new to the name, it is a tavern located within Novigrad and can be located on the map. This will not be the first time you’re passing by it. Therefore, it’ll be relatively easy to discern your direction.

Near the house with a gigantic flower garden, Geralt of Rivia will be met with a gang of bandits. This event generally occurs near the previously mentioned location in front of the Burcher’s shop (there will be a sign stating ‘Butcher’s” on the shop).

During the interaction, you will be requested to find their missing companion along with the information that he was last sighted moving from a sewer to a harbor. Luckily, the quest’s directional system displays the companion’s footprints along with the sewer slime’s scent. 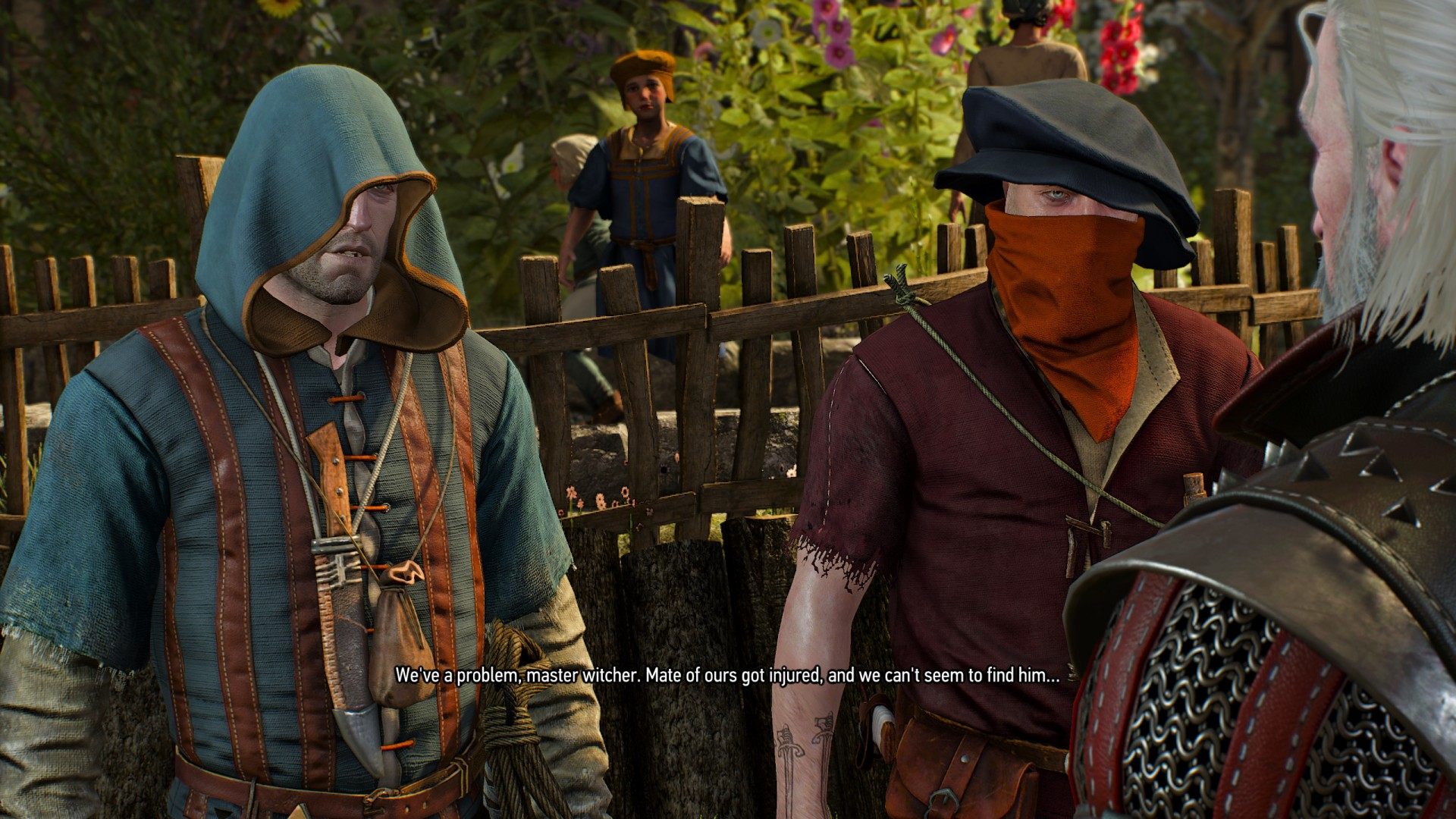 Simply leverage your Witcher Senses in order to follow the pathway. Since this is not a solo quest, you will have the bandit NPCs accompanying you through the journey. However, your progression will come to a halt due to a witch hunter.

This interaction will ensue while you pass through the western side of St. Gregory’s Bridge signpost. Surprisingly, the bandits will identify the hunter as the guy they were trying to chase for burning their White Death. Since this drug is relatively common in the lore of Witcher, you will be encountering it quite often by the name of “Fisstech”.

You will have the following choices at this point:

Leaving the Witch Hunter won’t do much other than making the bandits loot his body for valuables. There will be no reward given for the quest in this scenario aside from the small fee the Bandit Hunters give you (100 Oren). 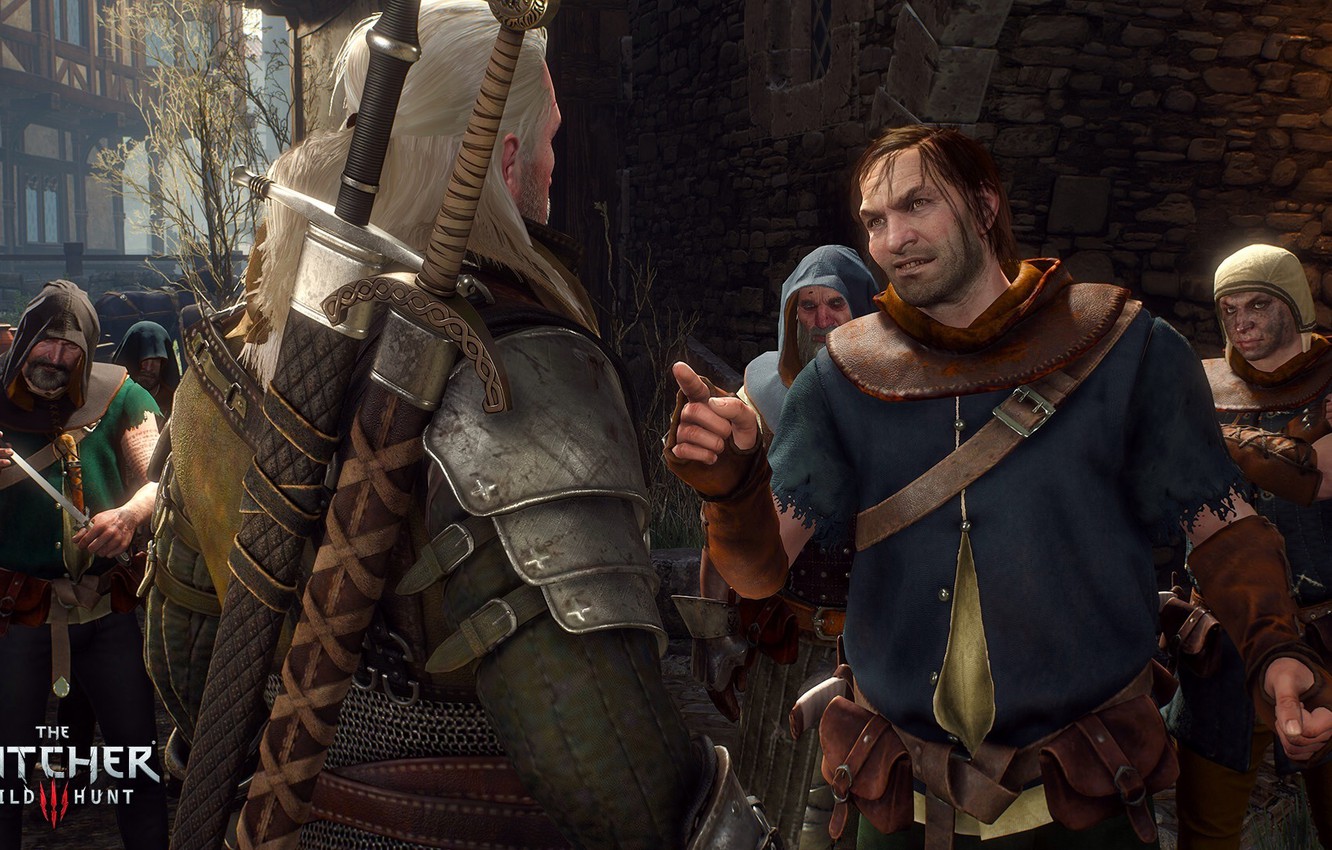 There won’t be a notification for this, but the payment will be delivered nonetheless.

If you choose to protect the dying Witch Hunter, the Bandits will turn on you. Since all three of them will be level 14, the upcoming battle will be rather tough. This is mainly because the element of defending the hunter is added to the hard odds. Once you kill the three bandits, loot them in order to gain a few pennies (this will be your reward for completing the quest). After that, the Witch Hunter will ask you to give him medical attention. You will have two choices at this point:

Since the quest will be completed here regardless of your choice, it’s completely fine to go either way. You won’t be getting any additional rewards other than being able to loot the dead bodies of the bandits. Thus, you can now proceed to complete the first portion of the quest (if you haven’t already). 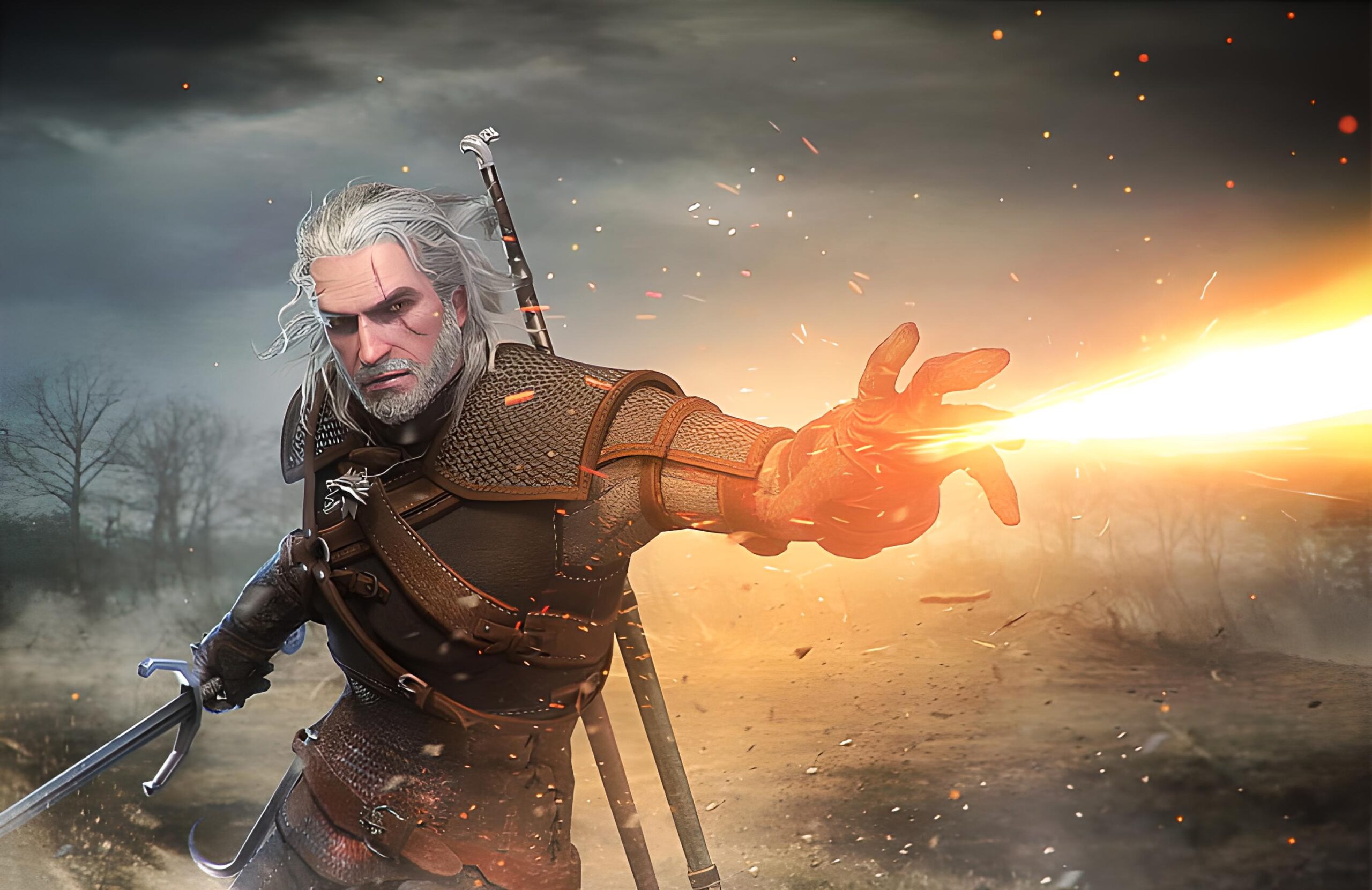 While the quest is relatively streamlined, there are a few points of contention that can make it progressively difficult if handled poorly. For starters, you won’t be able to get easy access to Novigrad unless you don’t resort to the violent method.

Upon reaching the area gates, the guard will ask you to present a valid pass. You can either choose to kill the guard or wait for the scenario to play out. If you choose the latter, a second guard will come running out with a pass to show. It is recommended you follow this route in order to Recieve the Eternal Fire Letter of Safe Conduct.

Secondly, you can choose to delay Lussi’s quest after accepting it. However, the same cannot be said for the Bandits since it is a tracking-based quest. If you choose to forcibly delay it, the game system will automatically conclude the quest as failed.

Needless to say, it’s better if you conclude the quest as soon as possible. This is mainly due to the fact that the quest at hand is not related to the main story. Thus, you won’t be making much out of it anyways. The only main advantage is that the quest is repeatable, so you can theoretically grind it to the point where the time investment begins to make sense.

While following the trail along with the bandits, make sure to stick as closely as possible during the search. If you head too far from the trail, the game system will deem the quest as failed, with the bandits commenting that you’re too far away. Make sure to leverage your Witcher senses as much as possible in order to receive a decent turnover with the least wastage of time.

Lastly, inspect Fitz’s house instead of jumping straight to the indicator. There is decent (RNG-based) loot to be found inside. Consequently, there’s no set timer for the search time since Fritz is already dead, and the ambush on Waltz won’t start until you reach the destination in Novigrad.

In essence, you have the option to choose the part you want to start first. While it doesn’t really affect the end outcome, it’s generally recommended that you do the Lussi’s portion first since it’s more rewarding than the Bandit’s quest.

At that point, you have the option to conclude your Novigrad Closed City quest journey, or you can choose to complete it if you desire so.

Genshin Impact Dream Solvent Guide: How To Get And Use
May 5, 2021

How To Get Castle Dimitrescu Dungeon Treasure In Resident Evil Village
May 10, 2021