The Legend of Zelda has no shortage of fun and interesting quests to clear. While fighting the obnoxious Gorons is one of the many, some require you to explore random deserted shrines. One such quest is available in Sign Of The Shadow Shrine.

In the Sign of The Shadow Shrine, your main purpose will be to defeat a modified enemy to complete a test of strength. While the quest itself is nothing too difficult, reaching the area itself can be pretty confusing – especially when it’s supposed to be a side quest.

Needless to say, the quest isn’t just about overcoming physical challenges. You also have to solve a complex riddle to prove your worth and reach the Sasa Kai Shrine. Luckily, that part isn’t quite hard since the pattern is rather one-dimensional.

There are a couple of ways to reach the Sign of the Shadow Shrine. While most of them require you to traverse through the messy mazes in Hyrule, certain shortcuts do exist that make your journey relatively easier.

With that being said, here’s how your journey will pan out:

The Legend Of Zelda: Breath Of The Wild | Gerudo Tower | Source: Nerdburglars Gaming

On your map, head to the top of Gerudo Tower to find Kaas. This area is located in a series of cliffs and is rather tough to access unless you have the Stable Warp available.

Simply warp to the Gerudo Canyon Stable and head towards to northern cliffs. Once you’ve surmounted them, start pathing your way along the west until you find the Gerudo Tower in sight.

Tip: It’s quite easy to lose sight of Gerudo tower due to the never terrain of the area. Therefore, a good way to identify your direction is the sandstorm.

If you’ve managed to get stuck in a sandstorm, then you’ve probably ventured too far from the actual location. Therefore, it would be a good idea to head back and look for the tower again. You can check if you’re in a sandstorm or not through your Sheikah Slate.

It will turn static if that’s the case. Otherwise, just keep heading in the specified direction until you reach the Gerudo Tower. The Legend Of Zelda: Breath Of The Wild | Gerudo Tower | Source: Zeldapedia

Gerudo Tower’s peak cannot be reached by standing below it. Rather, you need to find a spot high enough to paraglide from. Luckily, there is a pier-like wooden structure just near the tower that can help you achieve just that.

Climb up on it after circling the Gerudo Tower and reach the top of it while preparing your paragliding venture. It’s better to be cautious here since any mistake will make you restart the process.

Tip: You can reach on top of the wooden structure by using Revali’s Gale. Unfortunately, not a lot of players have access to it at this point in the story, so it’s more of a hit-or-miss.

From the wooden platform, just paraglide your way to the lowest compartments/floors of the Gerudo tower. Move your way up to the top by walking until you find a Rito named Kaas sitting with his accordion.

At first glance, you will see Kass pondering something. Once you get any closer, he will break the silence and will apologize for his lack of perception.

Thinking about the song that his teacher Court Poet wrote for the old Fallen Hero, Kass reminisces about the past. His teacher had always been hopeful for the return of the hero. His faith didn’t waver even after so long. Unfortunately, the return hasn’t happened yet.

The Legend Of Zelda: Breath Of The Wild | Kass | Source: Michat Niewiadomy

Therefore, Kass wishes to be the one to sing the Hero’s song on behalf of his teacher. Thus, he continues to master his trade in order to be up to the level at the fated event.

Getting the mind out of his dreams, Kass asks Link if he would like to hear a song related to this area. Once you agree, the song will start and will narrate the following scenario through his signing:

“An arrow being shot towards the northwest direction in the Sky, aiming to reach the sun”

Unfortunately, though, neither Link nor Kass seems to understand the meaning of this song at the time. However, there’s a hidden secret left in them by his teacher.

Dejected, Kass finally bids his farewell to Link and offers him good luck and wishes – which marks the start of the Sign Of The Shadow Quest.

This shrine is located deep within the Gerudo Highlands. Initially, the Sasa Kai Shrine is buried underneath the sand. There is a special method to make it rise, and that’s what the entirety of the Sigh Of The Shadow Quest is all about. 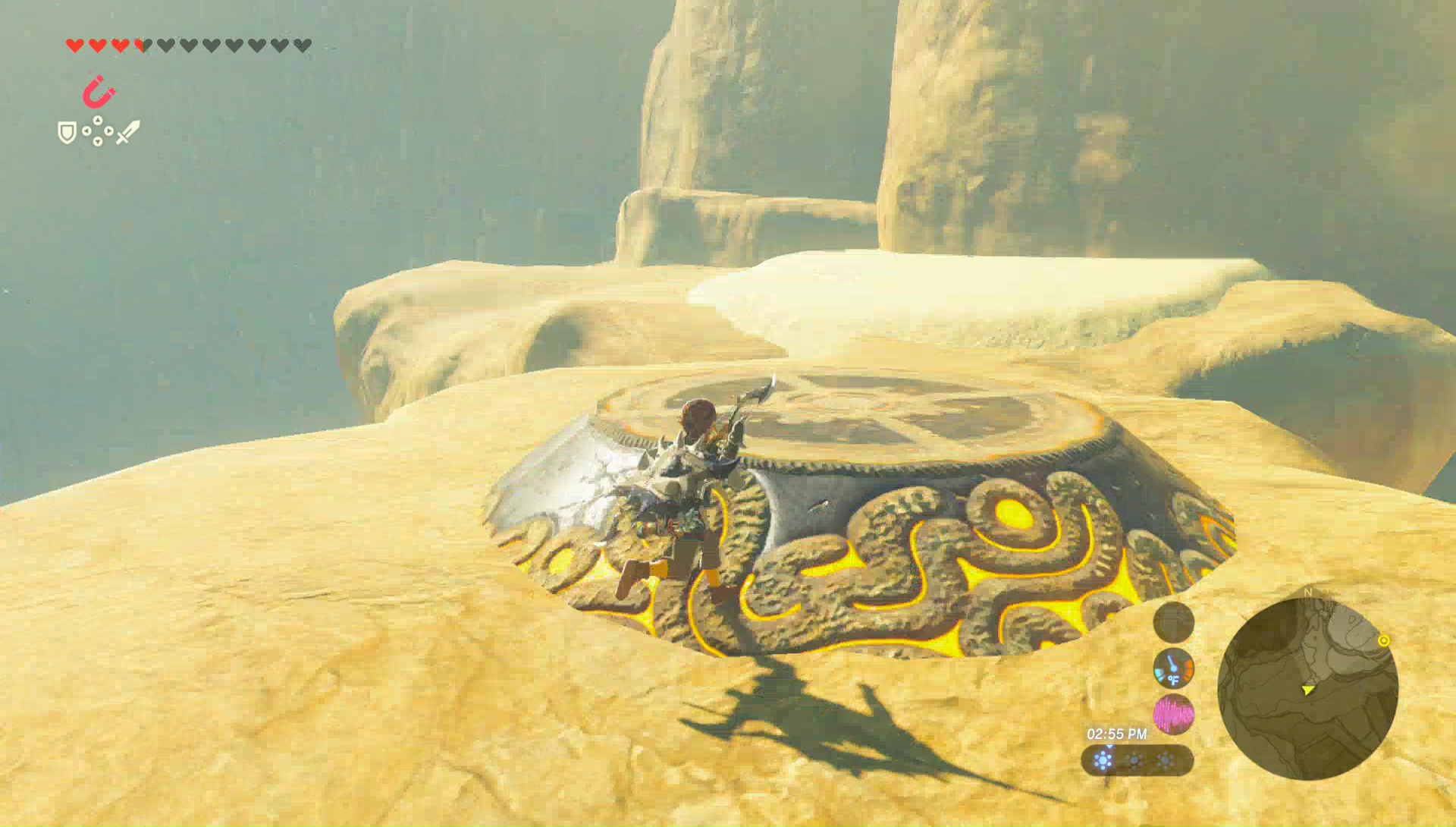 From the Gerudo Tower, head to a nearby pedestal in order to make this shine rise. Wait for the sun to cast its shadow upon the pedestal. Once the time is right, shoot the arrow towards the sun while standing on that very pedestal.

Once done correctly, a cutscene will ensue, showing the rise of the Shrine from the rubble and mud. Wait for the shrine to be fully visible and wait for the system to announce the Quest Completed message.

Once the shrine is up and available, you will have to head inside and fight a Guardian scout in order to prove your worth. Luckily though, the battle is quite easily won and once you’ve successfully defeated the guardian, wait for a portcullis to rise.

Within the next chamber, Link will receive a Spirit Orb from a monk inside, thereby marking the completion of the Trial of the Sasa Kai. The monk will then give his best wishes to Link and will fade away into the light.

From here onwards, the arc of the Sasa Kai will be considered complete, and you will be able to visit the shrine as normal. Do venture behind the portcullis to find a chest containing the fabled Frostblade.

All in all, finding the Sasa Kai shrine is all about timing and good aim. You just need to locate the pedestal and shoot; the rest of the quest is rather automatic.

Kass is someone who has seen a great deal during his adventures with his master. Therefore, cherish him as an ally, as he will be of great help in the future!

How To Unlock Infinite Axe Throw Distance In God Of War
February 7, 2022