In one mission, a Nefarious trooper will abduct Clank inside an imposing Seekerpede robot. You need to defeat the boss and save Clank from this to proceed further. This guide will include all the details on how to defeat the Seekerpede boss in Ratchet & Clank: Rift Apart.

How to Defeat Seekerpede in Ratchet & Clank: Rift Apart

The Nefarious trooper will be piloting a flying centipede-like robot. There are three phases in the fight, and it also includes the phase where you will have to chase down the Seekerpede.

In the first phase of the fight, you will have to chase down the Seekerpede. You will have into your bug ride and follow the boss through the lake. Maneuver the ride and avoid all obstacles such as mines while you keep chasing the boss.

Once you reach close enough to the boss, Rivet will tell you to get onto the robot and destroy its stabilizer. You will soon see ramps on the lake that will allow you to get on top of the boss. Destroy the stabilizer, and the boss will stop, and the second phase will start. 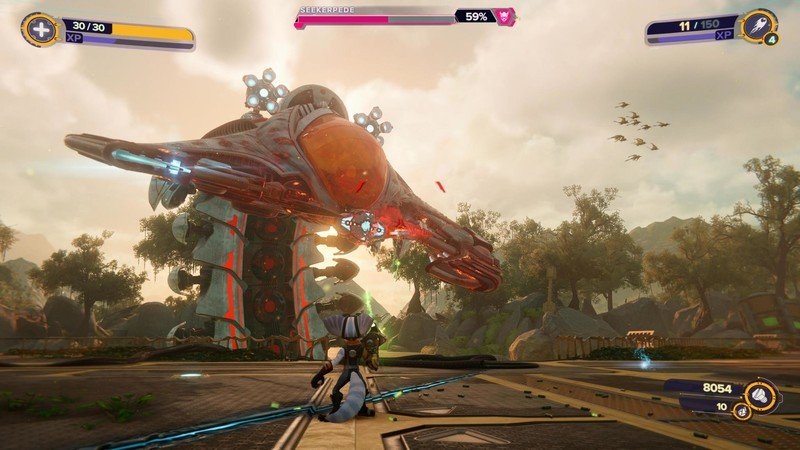 The boss arena will change, and you will have to fight it head-on. The boss has laser attacks and can summon robots to help it. Dodge or jump all attacks you can and use your Negatron collider to deal damage to the boss at long range. Make sure to jump onto its arms when it tries to swipe it along with the arena. After dealing enough damage to the boss, it will start to run away again, and you will have to chase it in the final phase of the fight.

You have to repeat the first two phases of the fight where you got on top of the robot and destroyed its stabilizer. The boss will use most of its same attacks on you again in this phase. Dodge all of them and deal damage to it. After some time, several spheres will drop down to the ground.

These will make a field around the boss to protect it. Avoid the impact damage from these spheres and start circling them to deal damage to the boss. Soon the boss’s Hp bar will go low, and it will open the hatch where the trooper is piloting the robot. A cutscene will play, and you will defeat the boss.