How to kill guardians in The Legend of Zelda: Breath of The Wild, this guide will walk you step by step and explain how to defeat the eight legged machines without getting killed yourself.

If you’ve been playing The Legend of Zelda: Breath of the Wild, then you probably already know how frustrating it can get whenever we have to face Guardians. For those who don’t know, Guardians are one of the game’s most challenging enemies as they are huge in size.

Because of their huge size, you can recognize them from a long distance and can avoid them. However, there will be times when you will have to face off against one, and this is where things will get messy. The eight-legged machines can attack you with a laser beam, which can kill you in one hit if you aren’t wearing a good armor.

Breath of the wild how to kill guardians – Types of Guardians

At the moment, there are six types of different Guardians in the game. That are:

Killing Guardians comes with many benefits. To start with, you get to live. Aside from this, you can collect ancient items such as screws, gears, and springs once you kill them. These items can be exchanged for new weapons in Akkala. If you’re lucky, you will even find some ancient loot off the Guardian you just brutally killed.

Ways to Defeat Them

Thankfully, no matter how much vicious these Guardians may sound, there are indeed some ways through which you can defeat them easily.

Get Your Hands on Some Ancient Weapons

First and foremost, you must get your hands on some good ancient weapons. Most players don’t realize the fact that normal weapons don’t deal a lot of damage to Guardians and they are pretty much useless against them. Instead, you need something that will be as much powerful as the Guardian itself. 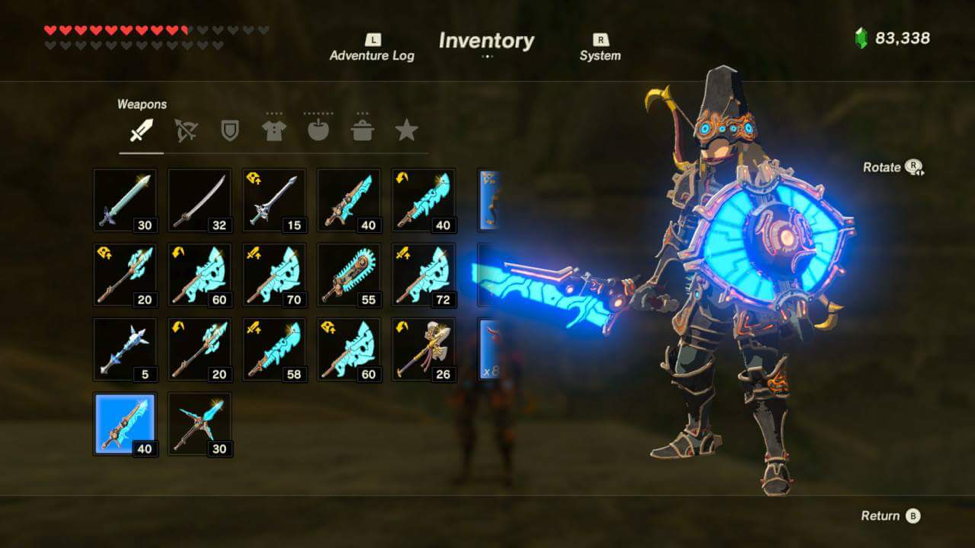 In order to take Guardians down, you will need to get Sheikah weapons. These are some of the most powerful weapons available in the game. For those wondering, these weapons can be either found inside Shrine chests or can be claimed from fallen Guardians scouts. You can even get them made from the Akkala Tech Lab. It doesn’t matter where you get them from, just make sure to keep some in your inventory all the time. Without them, you’re doomed.

Visit the Ancient Shop and Gear Up

Most of you might not know this, but there is actually a shop in The Legend of Zelda: Breath of the Wild where you can buy Ancient weapons in exchange for rupees. However, this shop will only become available after you complete the side quest in which you have to get the Blue Ancient Flame from a hill. Once you do that, here’s what you can buy:

Aside from these, there are some other items that are purchasable from the Ancient Shop. The items available in the shop will help you defeat Guardians easily, but only if can afford them. If you’re out of rupees, then it’s time for you to start earning some.

Use the Master Sword

The Master Sword has been regarded as an efficient weapon against Guardians by many players. While most of the weapons present in the game break after they have been used a few times, this sword is unbreakable. This fact alone makes it worth getting. Although you will have to go through some trouble in order to get your hands on it, you won’t regret your decision once the Master Sword is in your hands. 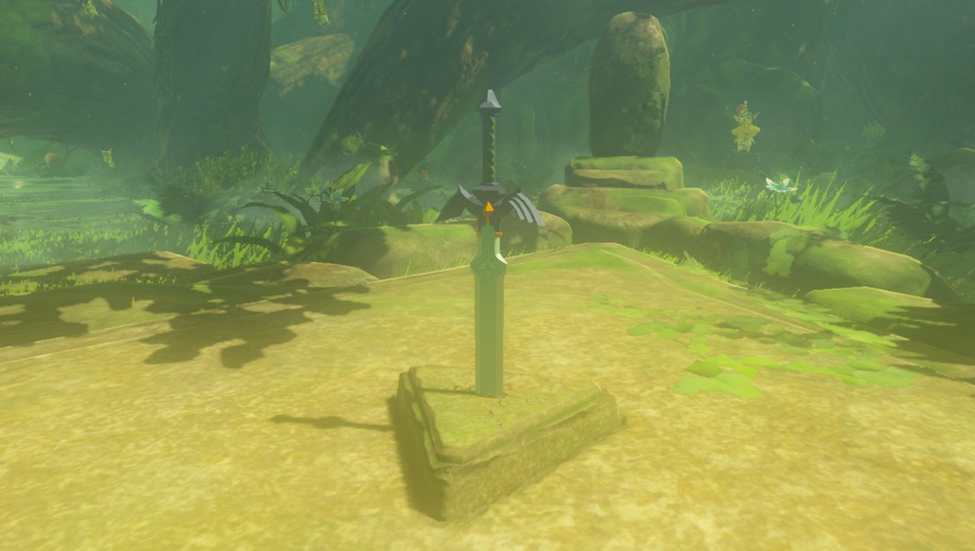 The best thing about this weapon is that it will double its base power whenever you will engage against a Guardian. However, although it may be unbreakable, you will still need to recharge it after it has been used for a long time. This is the very reason why you should keep some other weapons, for instance, Ancient weapons in your inventory even when you have the Master Sword.

Use Electricity Against Electric Machines

If you don’t already know, Guardians are machines that run on electricity. However, in the game, electricity isn’t something which gets along with them well. Because of this, we will suggest you get your hands on some Electric Weapons if you want to fry these eight-legged machines.

Many players have found that a 5x bow paired with Electric Arrows is something that works against Guardians beautifully.

Get the Ancient Armor

The Ancient Armor is one of the most powerful armors available in the game. In addition to this, if this armor is upgraded by Fairy Power, its power will increase. It will help you survive against Guardians as it reduces the amount of damage you take from the lasers fried at you. Also, you will be able to deal extra damage with your Ancient weapons while wearing this armor. 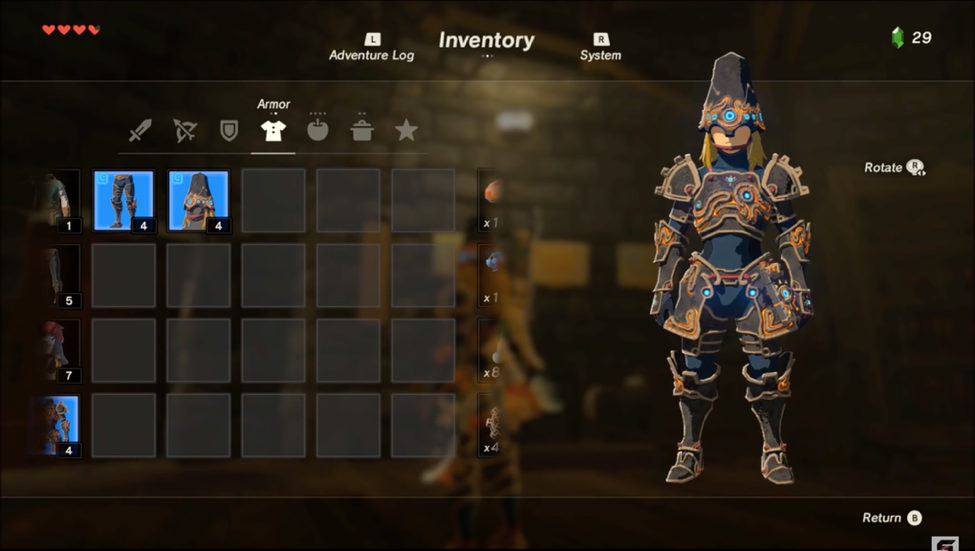 As this armor has many benefits, it comes at a heavy price. However, we assure you that it will be worth every penny. And oh, you will also look like a Shrine while wearing it, but it will still keep you alive. You also need to gather some materials in order to form this armor. They include Ancient Helm, Ancient Cuirass, and Ancient Grieves. All of this will cost you a total of 6000 Rupees.

How to Win in Combat

Now that you know about the equipment, its time to learn some combat tips. To start with, you first need to understand that you can actually deflect the beam fired at you by a Guardian. How? Well, you simply have to press the shield button at the right time, and that’s it. The Guardian will get a taste of its own medicine. Keep in mind that if your timing is not correct, your shield will get destroyed.

In addition to this, there is one thing you should always keep in mind while facing Guardians. Most players don’t know that a Guardian’s eyes are one of its week points. If you happen to be low on health, you can simply shoot an arrow in its eye which will make it stop functioning for a few seconds.

You can use this time to either get to a safe distance or simply launch a counterattack. If you have some Ancient Arrows in your inventory, then it will be wise to use them first as they are lethal against Guardians. In any case, keep your distance, aim properly, and blow the eyes out.

You won’t learn how to defeat Guardians easily unless you practice. Even if you have the proper equipment, you won’t win unless you know how to use it. It will be best to wander around the map to face some guardians and test your skills against them. Even after elimination, you will get to learn something and improve your combat skills even more.

Another important thing to keep in mind is that you will be facing off against six different types of Guardians. You will need to deal with all of them differently as they have different shapes and sizes. No need to worry about this as once you’ve spent enough time practicing, you will pretty much get an idea about how you can take each one of them down easily.

We hope that our guide on how to kill guardians will help you with your journey in The Legend of Zelda: Breath of the Wild.

Zelda: Breath of the Wild Star Fragments Guide: How To Get And Use
November 28, 2019

Legend of Zelda: Breath of the Wild – Characters
September 14, 2022