Elden Ring has a couple of NPCs that you can interact with and at times they will have quests that you can complete. Ranni the Witch has a questline which is rather interesting as it takes you to different locations and gives you different loot as you progress. In this Elden Ring guide, we are going to walk you through how you can complete the questline of Ranni the Witch.

Before proceeding it is worth pointing out that the questline contains the story and lore. If you don’t want to spoil the game for yourself and head in blind then you should not read ahead.

Note that this questline is linked with Blaidd’s questline so if you are interested in starting that off then you can do that by heading into the Murkwood Forest Ruins.

When you hear the howling you need to talk to the merchant in the Church of Ellah. He will give you a gesture. Head back to the Murkwood Forest Ruins and use the emote. This will bring down Blaidd and you can then talk to him.

How To Complete Ranni Questline In Elden RIng

Before you can start the quest you need to clear the boss, Royal Knight Loretta, inside Caria Manor. 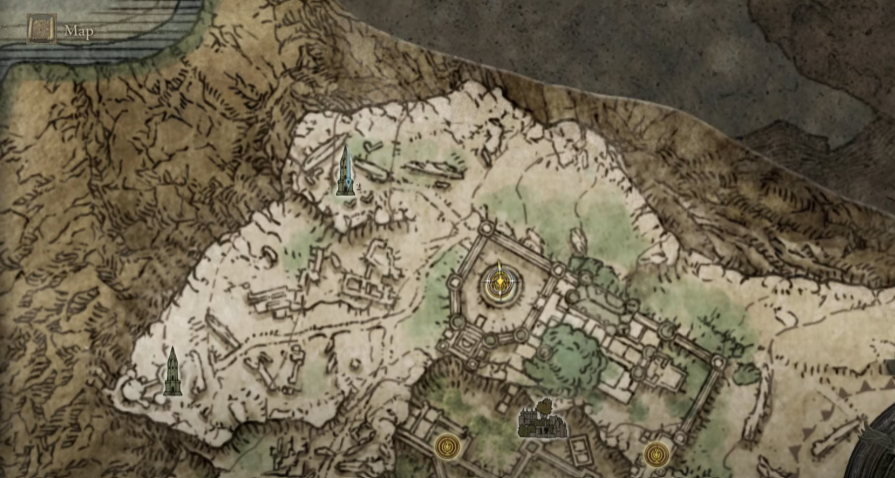 This will unlock the path that you need to take in order to get to Ranni’s Rise. There is a dragon on the way but you can use Torrent to run past without having to fight it.

Once you make your way past the dragon you can get to Ranni’s Rise. 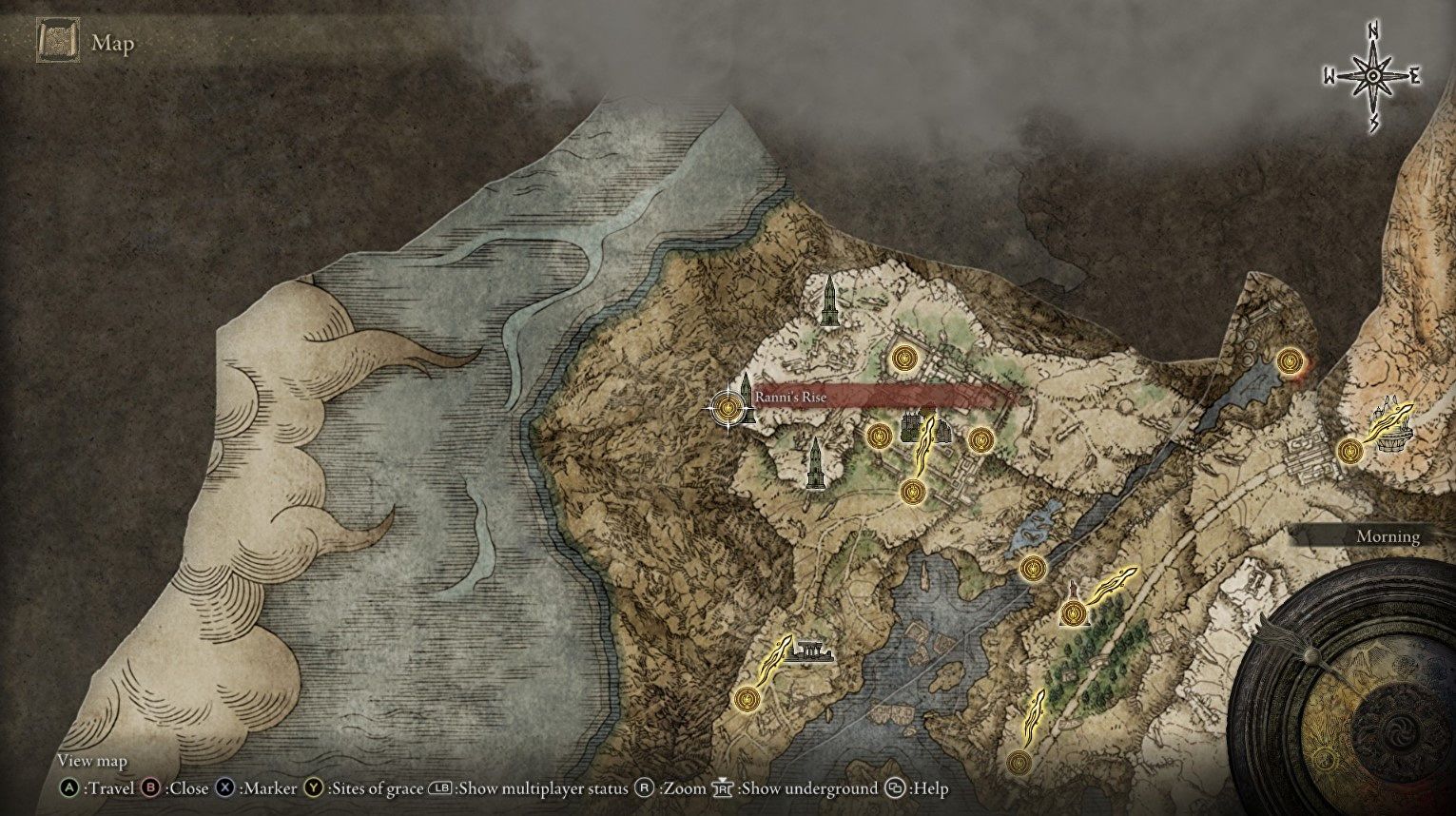 Take the lift up and talk to her until she has no more dialogues. 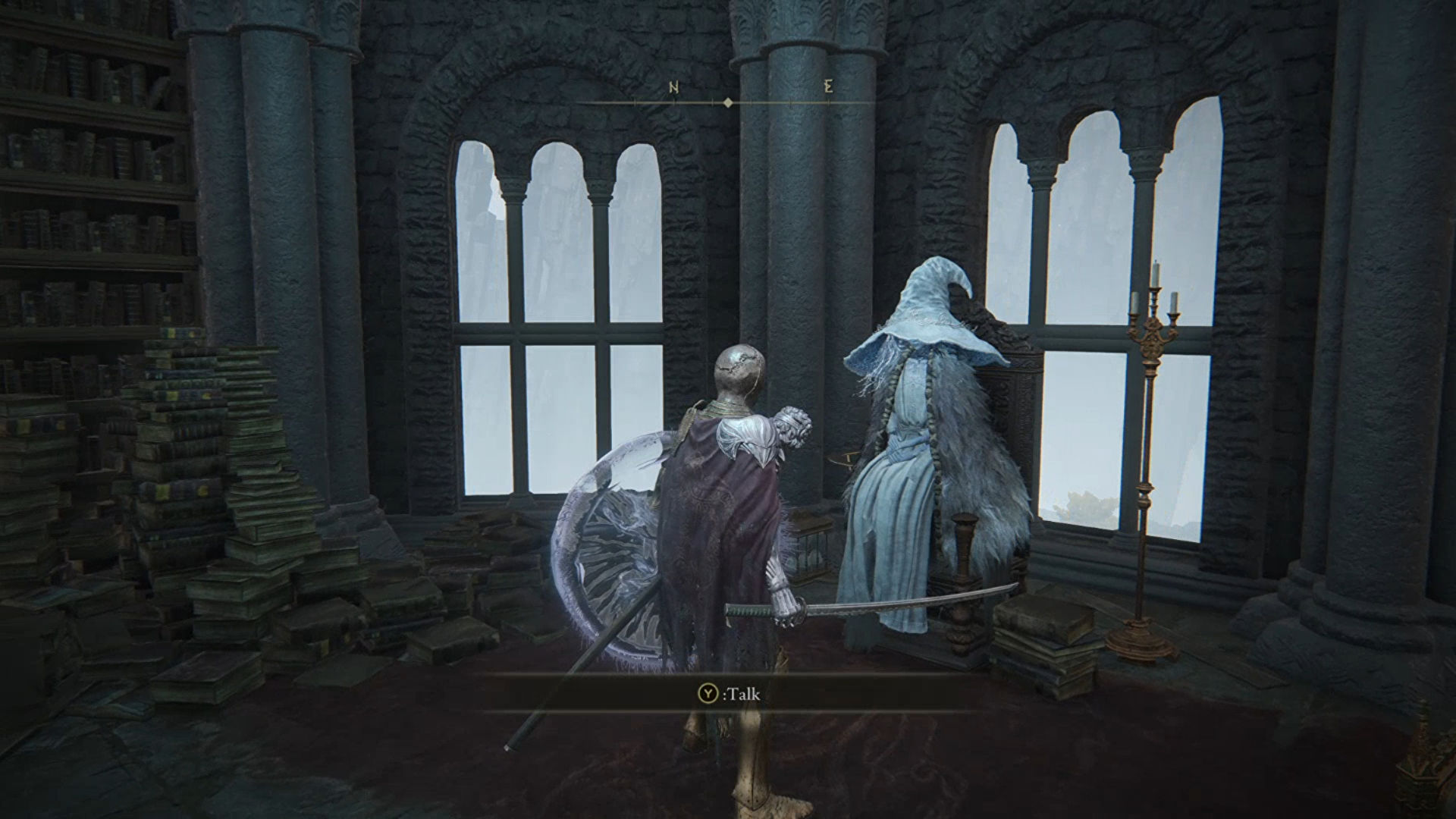 She will introduce you to some people. If you started the Blaidd questline then you will see a familiar face.

Next, you need to find Blaidd on Siofra River. If you have not unlocked this area yet then you can do that by going down a lift next to the minor erdtree, next to the Murkwood Forest as shown in the image below:

Proceed ahead and you will find another lift that you need to use. This is going to take you to Siofra River.

Pass the Hallowhorn Grounds and you will find Blaidd close to a Spirit Spring. Talk to him and he will ask you to talk to Sorceress Sellen.

Where To Find Sorceress Sellen

Sorceress Sellen is behind a wall located behind the Mad Pumpkin Head found under the Waypoint Ruins, East of Agheel. 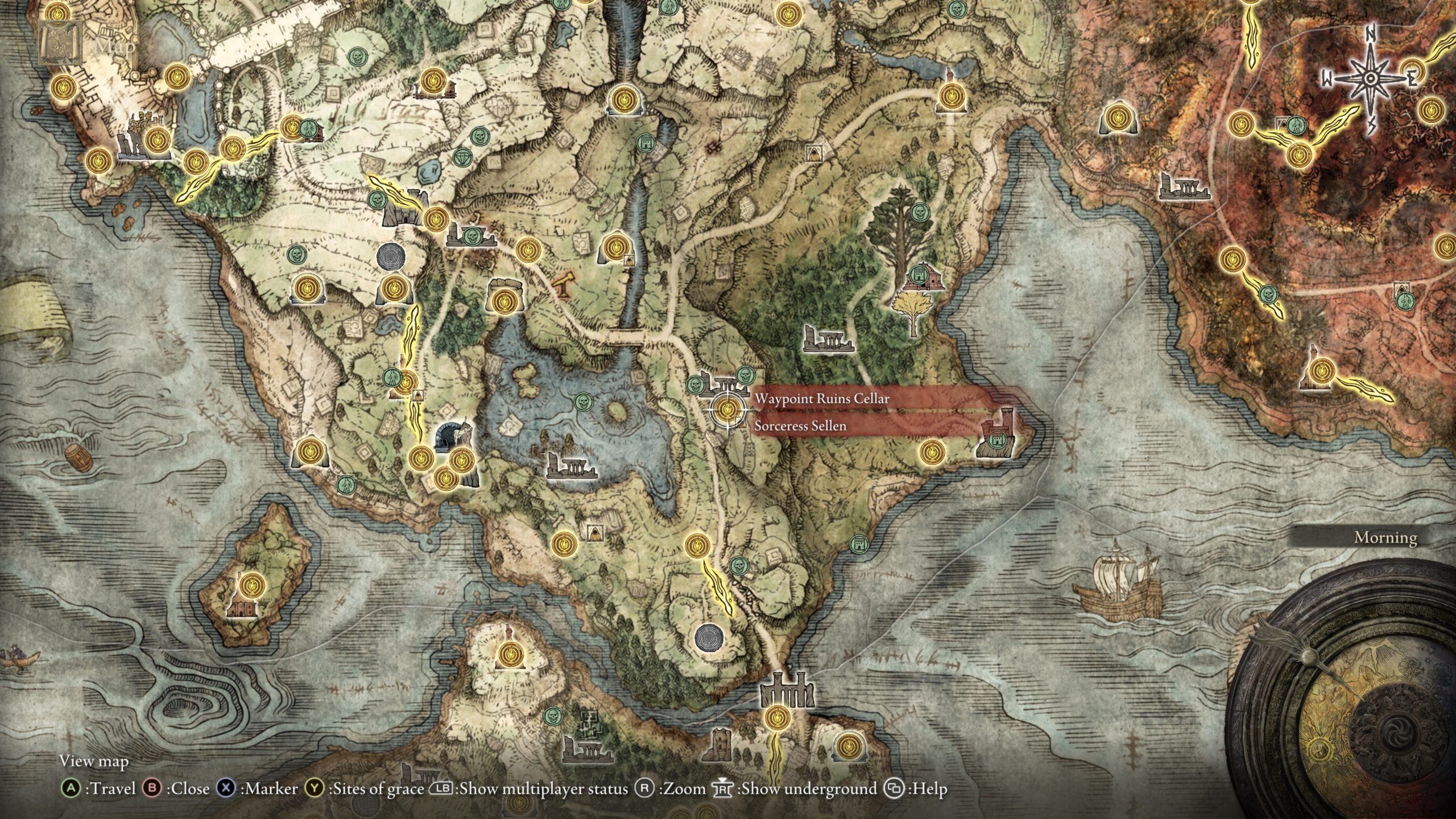 Talk to her and she is going to give you some information that you will need to take back to Blaidd who is still in the Siofra River area. 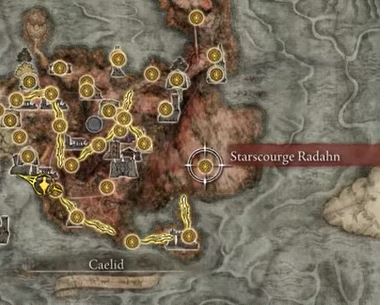 Now you will need to beat the boss Starscourge Radahn. This encounter used to be very difficult but it has been nerfed and there is a cheese method that you can use if you are having trouble. Head over to Castle Redmane in Southeast Caelid in order to get to the boss.

After beating Starscourge Radahn, you need to head over to where the crater is in South of Mistwood. This is going to take you to Nokron. Go through this area and kill the boss that has the Mimic Tear.

After that, take the bridge to the grassy area and then hug the leftmost cliff and get to the Night’s Sacred Ground Site of Grace. Now, traverse the roofs to get to the ground level of the church and find the Fingerslayer Blade treasure. 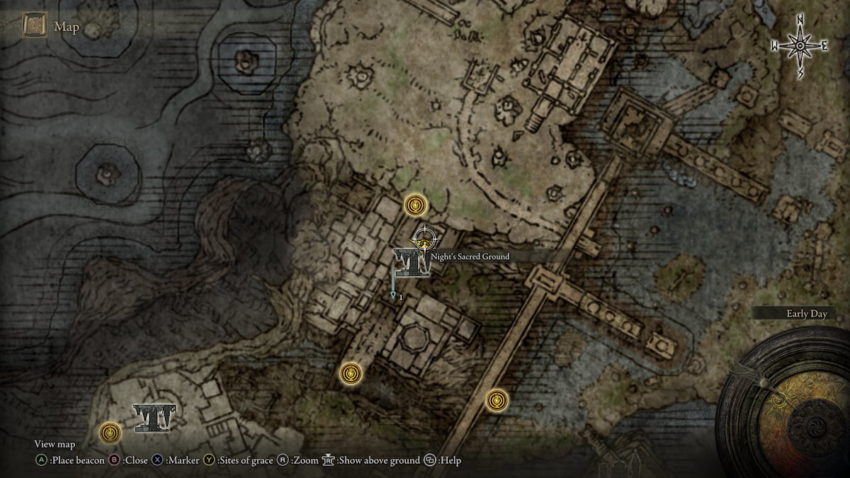 Take The Treasure To Ranni

Head over to Ranni’s Rise and talk to Ranni. She will give you the Carian Inverted Statue. With this key item, you need to head over to the Carian Study Hall in West Liurnia. Interact with the statue that is on the altar in front of the entrance.

As the tower is going to be inverted now, you need to head up to go down. Head across the bridge and get to the Divine Tower which is to the east. At the top, loot the Cursemark of Death from a dead body.

You need to go back to the Three Sisters. You need to go to the Northernmost tower which is called Renni’s Rise. Use the teleporting Waygate at the top to get to Ainsel River Main. Get the Miniature Ranni.

Talk to it at a Site of Grace. Try a couple of times and it will talk back. Now follow the river to Nokstella and down to the Nokstella Waterfall Basin Site of Grace. You can take the lift down. Through the next tunnel, you will need to fight an invader. Beat the invader and the Miniature Ranni will give you the Discarded Palace Key. 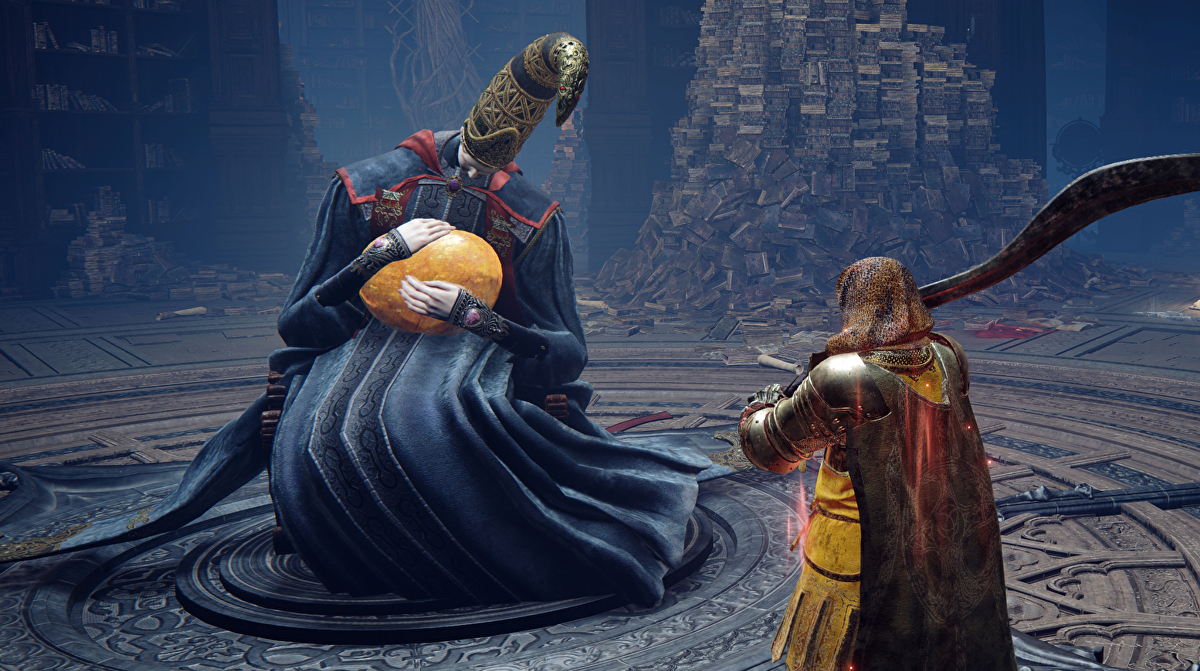 Go to the Raya Lucaria Grand Library. This is where you fought Renalla. Next to her is a chest that is locked. You will be able to open it now. Inside, you will find the Dark Moon Ring.

Once you have it, you need to go back to where you killed the invader. Proceed Southwest to get to the Lake of Rot. You can use the stepping stones to avoid taking damage and rot buildup.

Traverse to the Grand Cloister building. Here you will find a coffin on the edge of the waterfall. You need to get inside to proceed further.

Astel, Naturalborn of the Void

Now you must face Astel, Naturalborn of the Void. This is a rather difficult boss that can tear through your defenses. So your shield might not be as effective as dodging.

We recommend using a tanky summon and staying behind the boss and dealing damage from there in order to void taking damage.

Once the boss is dead, you can proceed forward and take the lift which is going to take you to the raised plateau in Liurnia. You face a dragon here but you do not need to fight it.

You need to head Northeast to the Cathedral of Manus Celes. Drop to the ravine below in order to find the body. Interact with it and slip the ring on the finger of the body.

This is how you can complete the Ranni questline in Elden Ring. Once you have completed this questline you can do the remainder of Blaidd’s questline as well.

If you are interested in learning more then you can check out our guide on how you can get some of the best weapons in the game.

Elden Ring Legendary Talismans Guide: Where To Find Them All
April 29, 2022

How To Complete Sorceress Sellen Questline In Elden Ring
April 20, 2022