How To Beat The Gilded Hunter In Code Vein

You can find the Gilded Hunter in Ashen Cavern. An alternate version of the boss can be found in Depths: Arachnid Grotto. Ideally, you should use weapons and abilities that have Piercing damage. The boss has no defense against them.

The boss is resistant to fire and blood so be sure not to use such abilities and weapons if you are interested in taking out the boss as quickly as possible. Merciless Reaper can increase damage significantly. 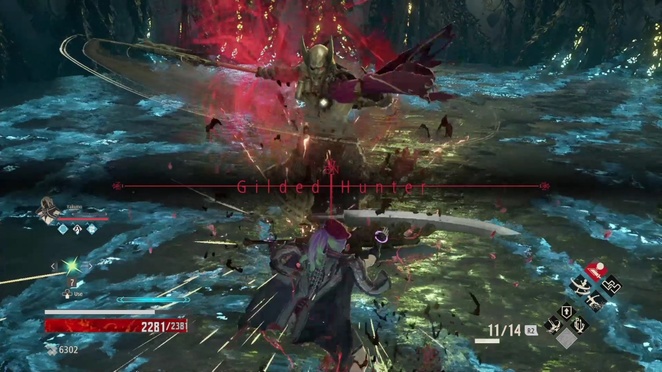 This is not an easy fight. You should use a Greatsword for added damage and the Fighter Blood Code. The following are the attacks that the boss can use against you:

The boss will perform two attacks, one after the other. You need to dodge forward each time he strikes in order to avoid getting damaged.

The boss will raise his hands and use an AoE explosive attack. You can roll back twice while the boss is casting in order to avoid the attack.

When you are at a distance, the boss will come at you and perform a two-hit combo. You can dodge in either side to avoid the attack.

The boss will charge his weapon and shoot a beam across the room towards you. You can dodge to either side when the boss moves his lance forward.

In the second phase, the boss is going to use a three-hit combo. You can dodge the first strike and block the two others. The second phase is very shot and once it is over you need to hit the boss with everything that you have. The boss will become very aggressive and you will not be able to dodge all his moves.

You should not let the boss transform. If he does then you are most likely going to die.

That is all for our Code Vein Gilded Hunter boss guide. If you are interested in learning more about the game then you can check out our guide on how you can get the true ending in Code Vein.

Code Vein Items Guide: What Do Different Items Do?
February 23, 2020