Mount & Blade: Bannerlord has no shortage of unique hits and attacks that can pivot the direction of a battle. Some of these attacks are pretty easy to execute.

However, others can be used as difficult, especially when it comes to the Couched Lance Damage tactic in Bannerlord. Only a limited number of weapons can use this effect, but those that do are plenty strong.

In this guide, we will break down everything related to Couching a lance in Mount & Blade: Bannerlord. So, with that said, let’s get started!

What Is Couched Lance Damage In Bannerlord

This is a technique that’s specifically performed on horseback. It can be applied by using specific polearms that have the term “lance” in their names.

The damage from this kind of attack is called Couched Lance Damage, and it is rather autonomous in its working. Despite this, it can be a bit difficult to land due to the nature of the charge.

Besides, you always have the option to make it manual, so it’s up to your discretion at the end of the day. The couch lance requires you to be at a sufficient speed. If you’ve not reached this threshold, the lance will be pointed upwards and will only come into position once you’re ready.

From there, you just need to ram into the enemy while pointing your lance directly at them in order to perform the Couch Lance. If done correctly, your will be able to deliver a considerable amount of damage – otherwise known as Couched Lance Damage.

Depending on your current difficulty, your controls might shift to manual lancing mode. In this case, the game won’t adjust the height of the lance, and you might not be able to deliver couched lance damage.

The player needs to actively press toggle weapon mode and he/she’s good to go. The default key for Toggle Weapon Mode is X.

If – depending on the difficulty – you’re doing too fast, the lance might not lower itself for a certain period of time due to cooldown limitations.

Just look for an indicator in the bottom right of your screen to know the ending time of the cooldown and re-initiate the attack.

The couch lance attack cannot be blocked with normal blocking methods. Plus, the delivered damage is entirely dependent on your speed at the time of the attack. 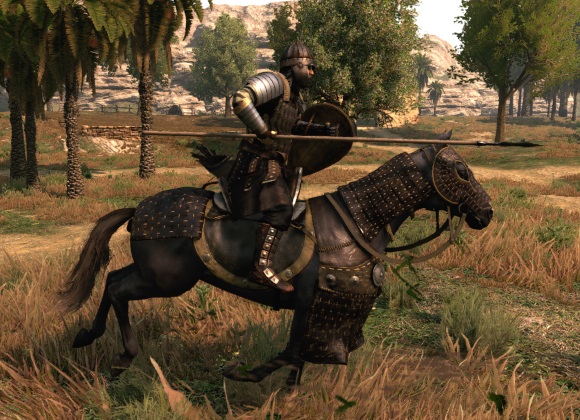 Generally, a single couch lance attack is enough to take an enemy down. However, minimal speed can often cause you to hit the enemy twice in order to take them down.

Whenever you charge at an enemy, the following message will pop up upon a successful attack:

This message floats around the game log and will disappear once sufficient amounts of new messages repopulate the area.

Is Picking Faster Horses For Couch Lance Worth It?

As mentioned, you have a fair chance of killing the enemy in a single blow as long as you land Couched Lanced Damage.

While a faster horse does guarantee higher damage, it’s not worth the investment since it won’t matter whether the target has died by taking 1 million damage or 1 hundred thousand damage as long as it dies in one hit.

So, unless you’re in genuine need of a fast horse, there’s no need to go out of your way to purchase one for couching damage.

Can Your Enemies Couch Lance?

The AI used in Mount & Blade Bannerlord is good enough to be able to use couch lance. Therefore, your enemies have a fair chance of one-shotting you before you one-shot them. 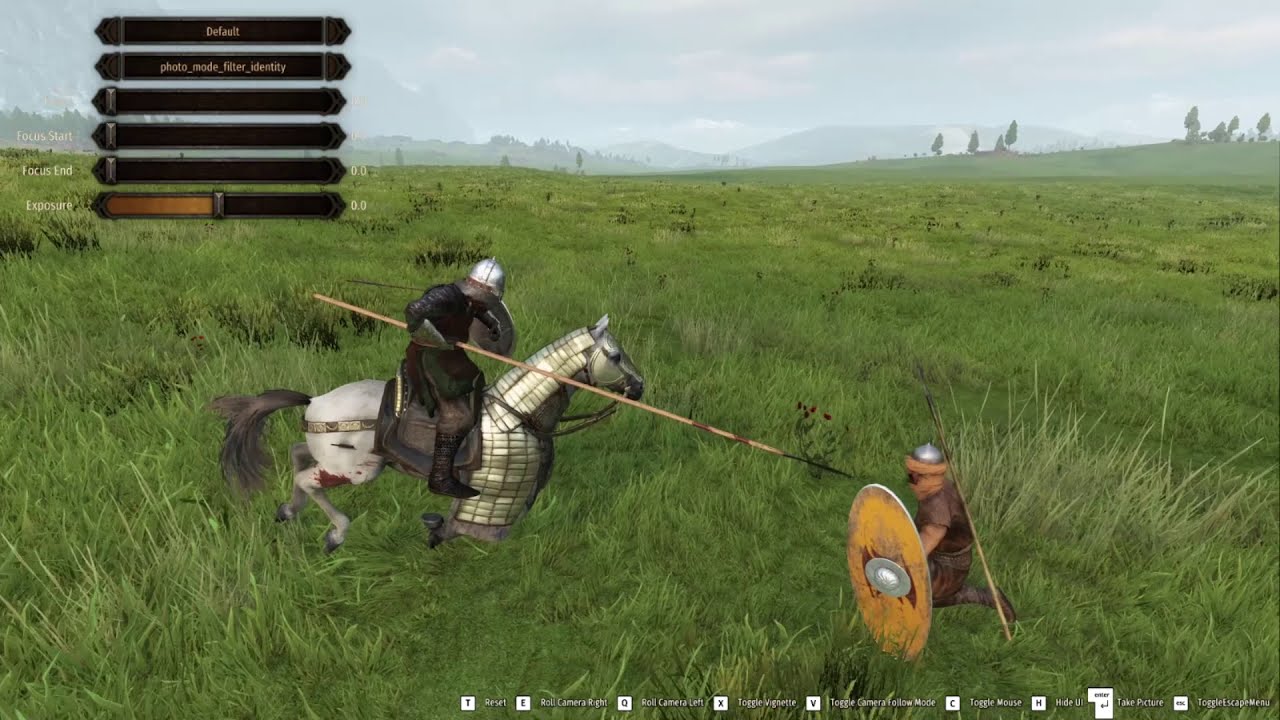 This concept is usually found in Sarranid armies and Tournaments. Therefore, we recommend you keep your guard against them. Plus, since you’re not going for a faster horse, an armored one might be better in such cases.

How To Block/Deflect Couched Lance Damage?

If your lance is shorter than your opponent, consider sacrificing your shield to evade the attack while preparing for a counterattack. It’s quite hard to outperform an AI in couched lancing since they’re programmed to perform the most optimal movement.

Couched lances can only be blocked with shields. It’s not possible to sustain or repel them with a weapon. Due to the damage of the attack, the shield has a pretty high chance of breaking in one go.

Luckily, you can chamber couches with the aid of your weapon. However, the timing on this needs to be extremely precise or you won’t be able to make it otherwise. 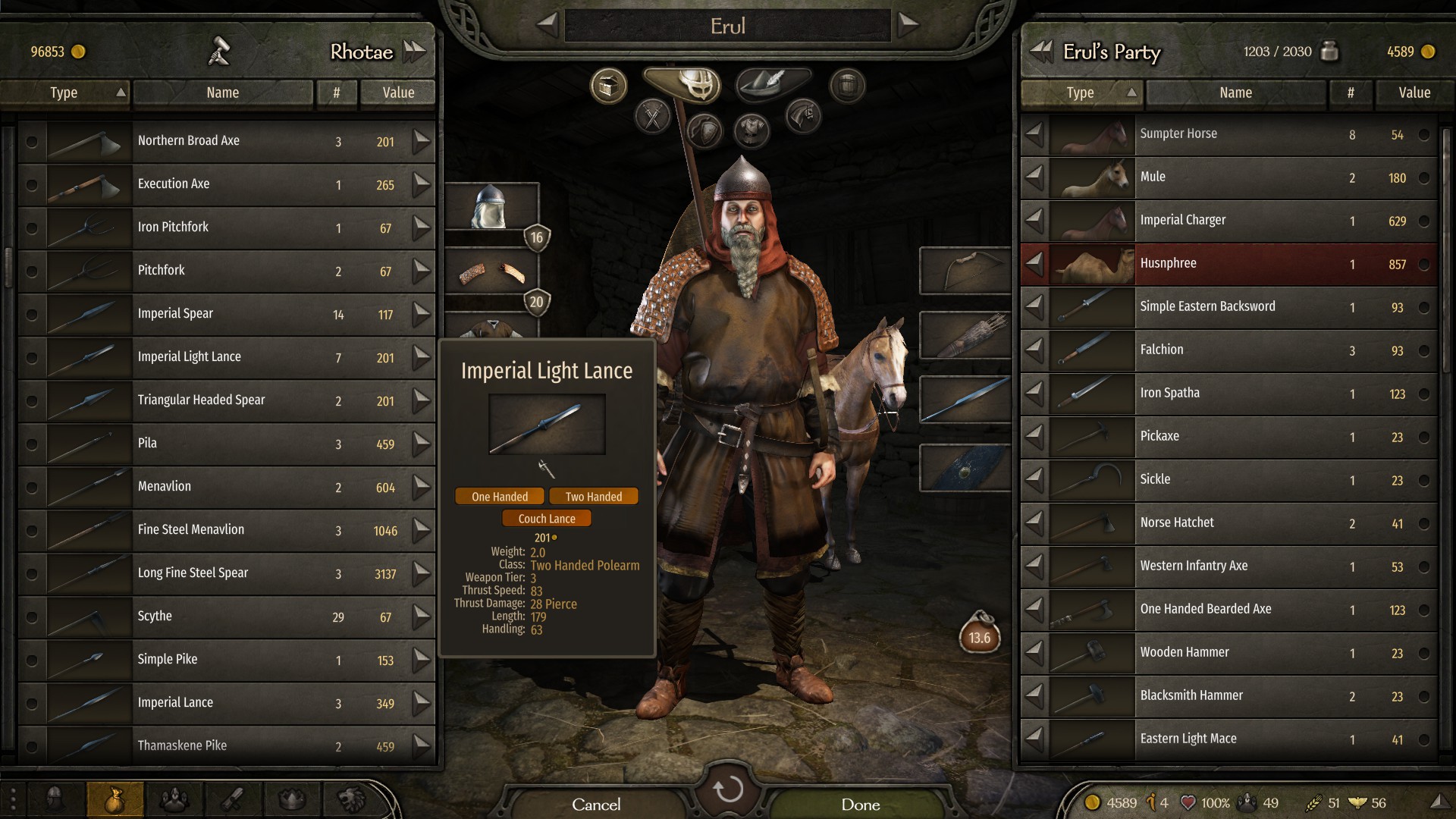 The following weapons are able to inflict the couched lance attack in Bannerlord:

The shortest and fastest in-game lance that can swing from side to side during couching. This effect is unique to this weapon, with its heavy size being its main quality.

It’s quite hard to get chambered on the Double-Sided Lance.

Longest lethal in-game lance that is considered the slowest in-game weapon. Its length makes it pretty good for couching, but the lack of speed can be an issue.

As the name suggests, the heaviness of this lance makes it bad in terms of speed. However, at the same time, it deals a considerable amount of damage as long as it hits.

Unfortunately for it, you don’t really need that much damage to take your opponents down, so it’s kind of in a grey territory in terms of performance.

This is the only lance capable of dealing blunt damage. It’s generally found in the practice arena, and can be used to capture prisoners from horseback.

The couch lance damage from this weapon is no joke, especially if it manages to land on the enemy. However, at the same time, this weapon is pretty much useless on foot due to its low speed and non couch damage.

This is the regular lance present in Bannerlord; it has the following stats:

This is the lightest in-game lance in terms of weight. While its damage isn’t anything special, it is by far the easiest to use when fending off cavalry – whether it be on a horse or on foot.

In essence, performing couch lances in Bannerlord requires patience and practice. The controls are simple yet challenging due to the slight discrepancies.

However, once you do master it, the couched lance will become one of your strongest in-game skills. Besides, the automatic control on the easy difficulty is a great way of getting a feel of the mechanic, and can be a good starting point!

Bannerlord How To Couch Lance