Printer Filament is one of the Crafting Materials included in Tom Clancy’s Division 2, the latest video game release in Ubisoft’s Division series for PlayStation 4, Xbox One and PC.

The Printer Filament in The Division 2 is used at the Workbench to craft Gear and Skill Mods.

“Crafting material used to create mods for gear and skills. This material is mainly acquired by recycling mods through deconstruction.

A heated printing surface is recommended when using ABS to avoid the cooling process to cause warped surfaces.

Printing with ABS can produce VOC (Volatile Organic Carbon) fumes which can be toxic, especially to children. The base of Operations is equipped with sufficient ventilation to make sure any printing operation is safe for everyone in the room.“

An interesting fact about this material is that, unlike the Ceramics and Carbon Fibers, for example; you won’t be able to get Printer Filaments from the enemies you kill.

This Crafting Material can be obtained only by deconstructing Mods.

Regardless of the rarity level of a Gear Mod, when you deconstruct one, you’ll receive at least a Printer Filament.

To get more Printer Filaments in Division 2, make sure you keep an eye on the lootable objects (especially crates) when exploring Washington D.C.

Inside them, there are chances to find Gear or Skill Mods you can then deconstruct for Printer Filaments. Enemies also drop Mods.

Here is a picture showing this material after dismantling a Mod. 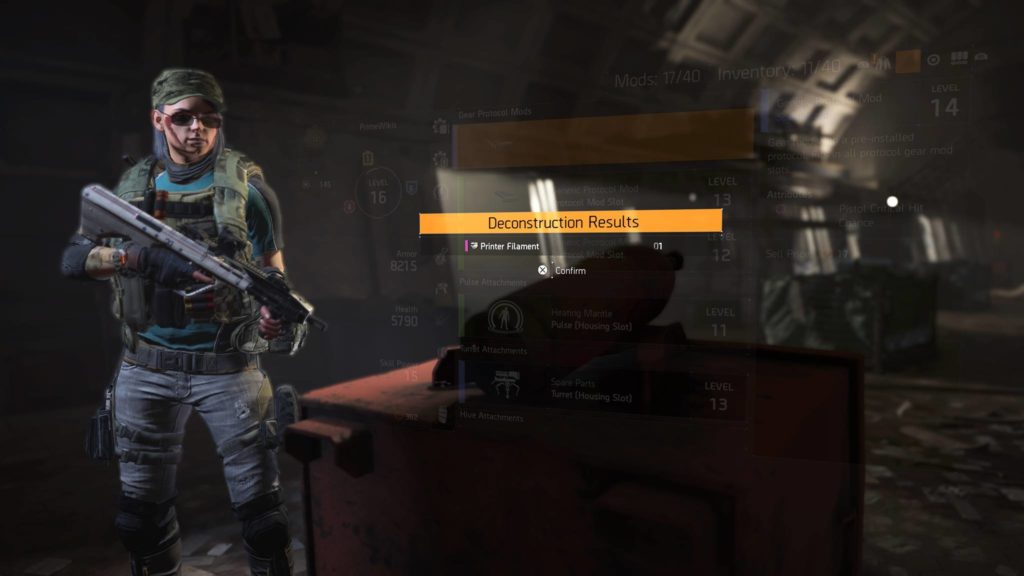 How to Use Printer Filaments In Division 2

Once you get these Crafting Materials you can use them at the Crafting Station to make Gear and Skill Mods. Fast Travel to the White House and look for Inaya al-Khaliq.

Keep in mind that you can’t carry more than 100 Printer Filaments at once. The maximum amount is reached after you purchase the Crafting Material 3 Perk.

Found a better way to get Printer Filaments in The Division 2? Feel free to share it with other Agents in the comments section below.