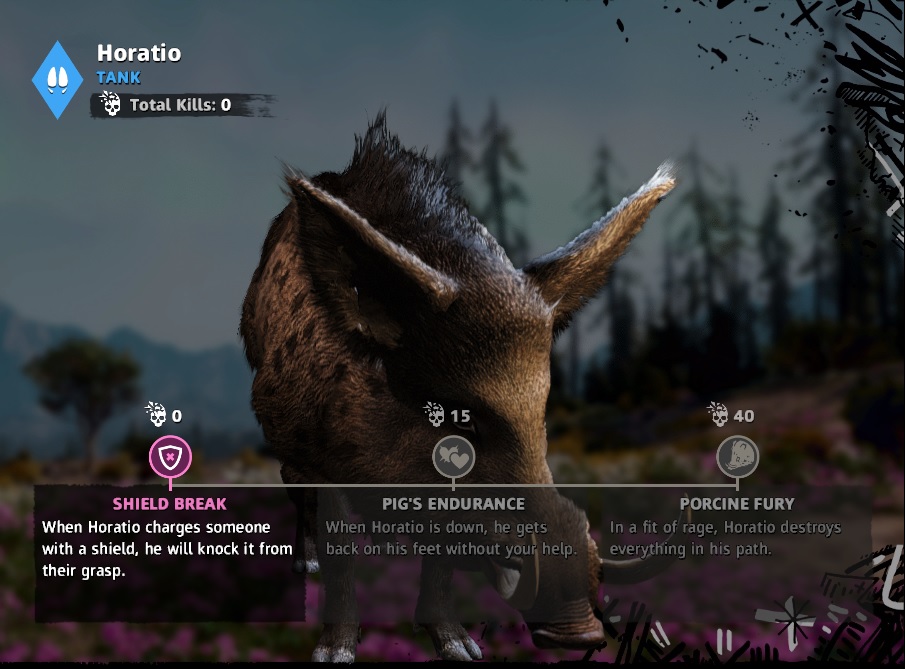 Horatio is a Gun for Hire or Fang for Hire featured in Far Cry: New Dawn, the videogame published by Ubisoft for PlayStation 4, Xbox One and PC.

Although this boar requires you to complete a Rank 2 mission, you can actually get him quite early in the game.

Once you unlock the free-roam, by finishing Gear Up story mission; Horatio becomes available, and you’ll find him in the northern part of Hope County.

The guide below explains how to unlock Horatio and where to find this extraordinary powerful Wild Boar.

How to Unlock Horatio

In Far Cry: New Dawn, Horatio can be unlocked by completing the side mission named To Love a Boar.

He is located at Elsinore Farm (pictured below) where he was captured by the Highwaymen, who are keeping him locked inside a shed.

How to Recruit Horatio

You can recruit Horatio the boar from the game’s Roster.

Select Horatio in the lower right corner and press the corresponding button to assign him as your Fang for Hire.

How to Upgrade Horatio

A tank, he uses his physical power to charge and absorb a lot of damage, but you can improve his skills, thus allowing him to better assist you.

In order to upgrade this companion in Far Cry: New Dawn make sure that you assign him as your Gun for Hire.

You don’t have to help him too much as he can take care of himself and score the required number of kills; thus ranking up quite fast.

Additionally, you can increase Horatio’s rank by upgrading the Training Camp at Prosperity. When you do that he will become even tougher than before.

How To Play Tribes of Midgard With Friends Guide
July 29, 2021