How To Complete The Astral Alignment Seasonal Activity In Destiny 2

The activity is divided into different parts. You can access the seasonal activity from the Dreaming City. After the matchmaking has been completed you will find yourself in the Blind Well area. To start the activity you need to drop your Wayfinder’s Compass at the center of the Blind Well.

The first encounter will have you defend the Blind Well from the swarms of enemies. Once you have killed enough enemies, you will be teleported to one of the many potential areas, where you need to activate a beacon and stop mobs from disrupting the Ley Lines. We go through the different areas and how you can complete the objectives below.

Deal With The Taken Rifts

In the next area, you will find numerous rifts scattered all over the place. You need to score points by dropping balls of energy in these rifts. This will disrupt the Taken energy that is seeping into the Blind Well. To get the balls, you need to kill specific Taken enemies that have “Eye of Xivu Arath” in their names.

Once you kill one of these Taken enemies, you will see a ball of energy drop. Pick it up and dunk it into one of the marked rifts. You will need to do this a couple of times before you can proceed to the next step of the activity.

In the next area, you have to stop the undead Eliksni from poisoning the Blind Well. In order to do that you need to protect the big Ether Harvesters scattered around in the area. Shoot the purple orbs of ether from reaching them.

This is yet another Taken activity with some Lost Knights that are invulnerable at the start. The area where you spawn is where you need to dunk the batteries in order to remove the shields that that Knights have and defeat them. You will need three batteries for each round. 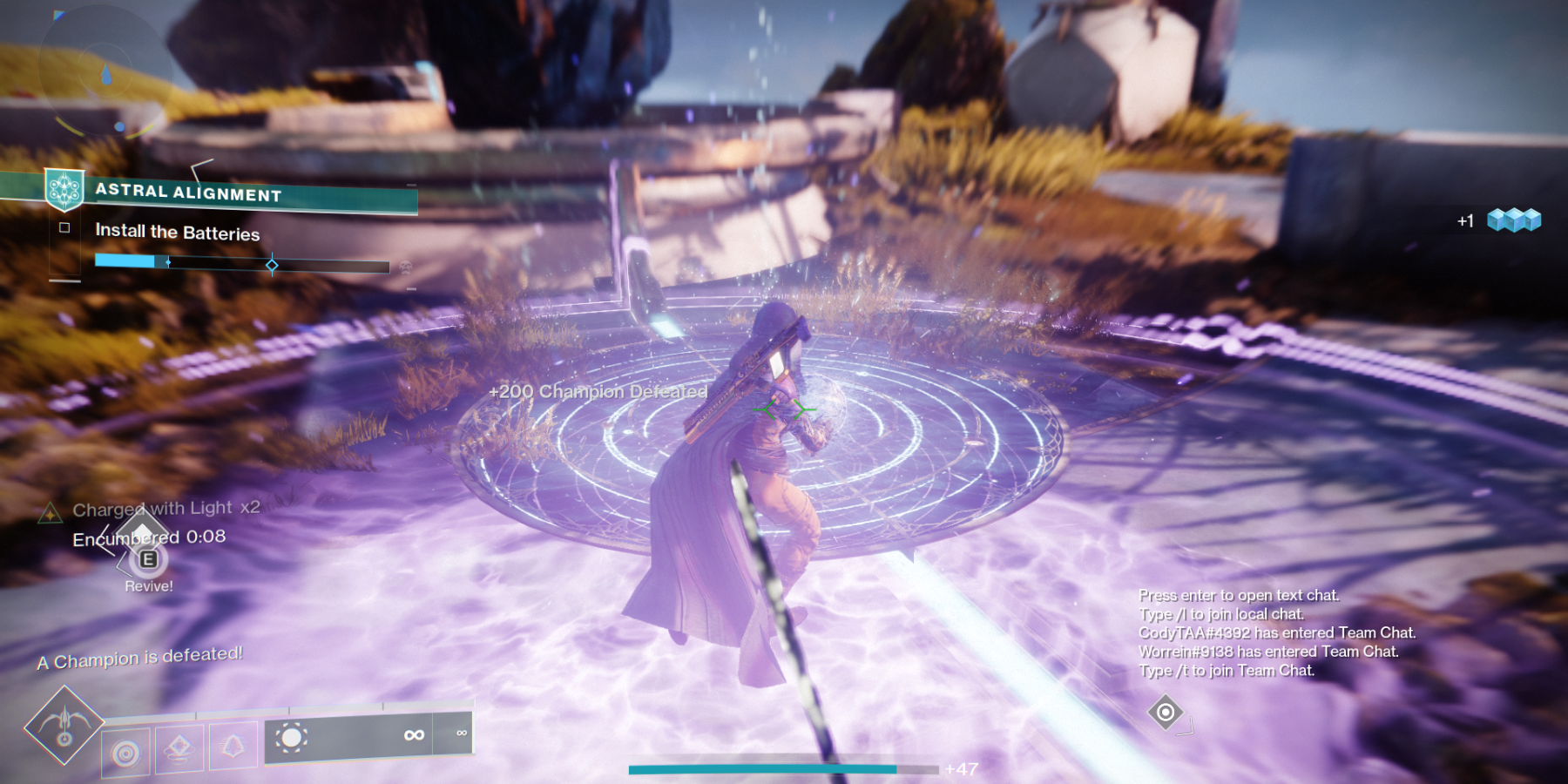 Picking up the batteries has its pro and cons. You get a buff that charges your abilities and Super but you will be slowed down. You have a limited amount of time to get the batteries to the spot they need to be installed. Once the timer hits zero you will drop the battery and you cannot pick it up for a few seconds.

You should have three members of your team carry batteries while the other three defend. The teams then need to swap roles when the batteries are dropped in order to keep the momentum going. Once three batteries are dunked, the shields of the Lost Knights are going to go down and you can kill them to earn points. You need to kill two sets of Lost Knights to advance to the next phase of the Destiny 2 Astral Alignment seasonal activity.

There are two bosses that alternate each week. Kholks is a shielded Taken Ogre and Kruutik is a Scorn sniper. The two have different mechanics which we cover below.

Once you have completed the previous activities you will return to the Blind Well. Here you will encounter the boss and other enemies. After you deal enough damage to the boss, he will protect himself with a shield. You need to take it down with a special Taken weapon. 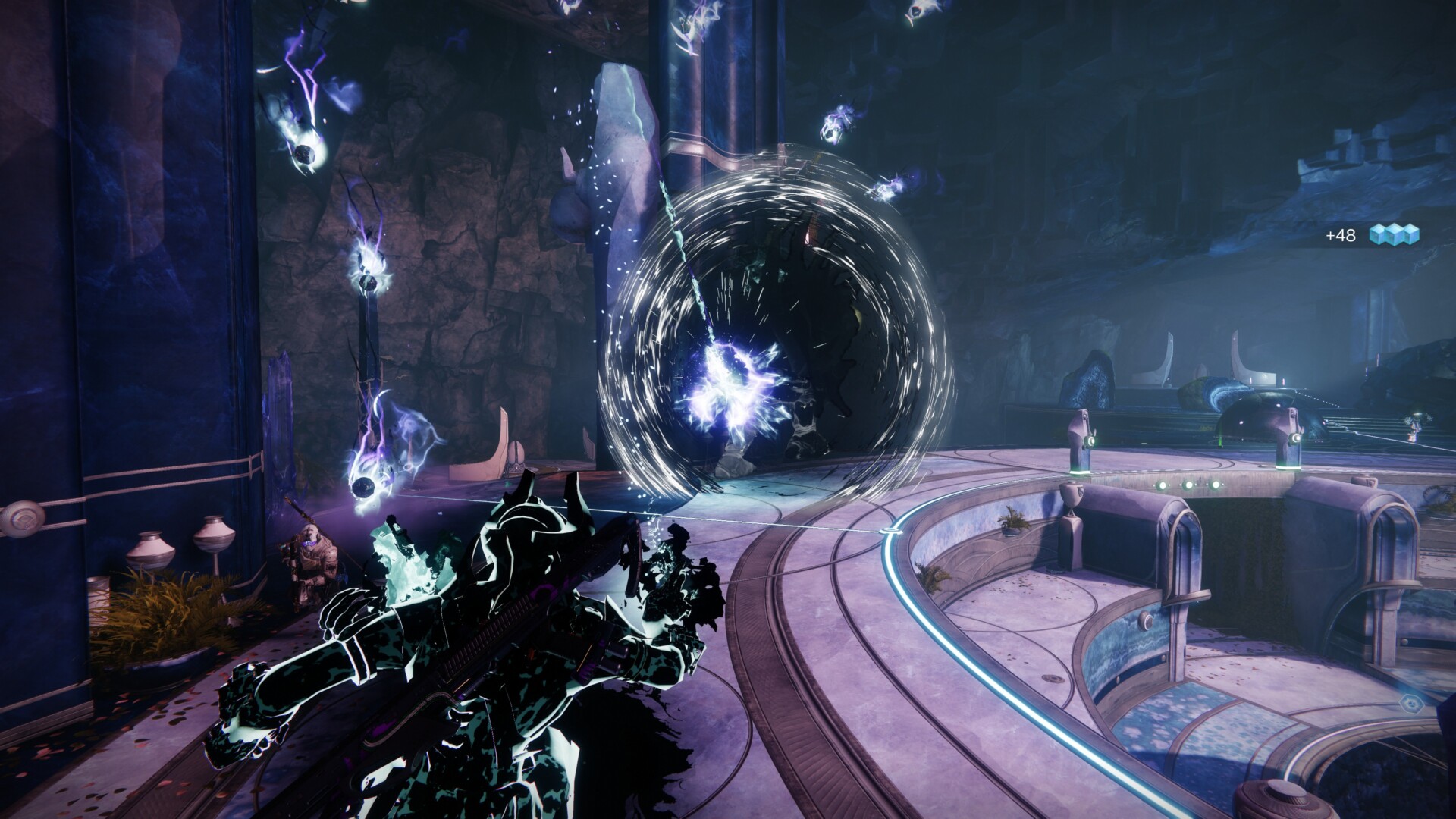 Look for when you get the “A Taken Pylon has appeared” prompt on the screen. When this happens you need to look around for a Taken Blight. Destroy the blight and the elite enemy and you will get the Taken Essence. Use it on the boss. You need to do this as fast as possible in order for it to be effective on the shield.

If you are unable to bring the shield down with once Taken Essence then you can look around the arena for another Taken Blight and repeat the process until the shield goes down. When that happens you can damage the boss. Repeat this process until you beat the boss.

The fight with Kruuliks is similar to that with the Ogre but the enemies are going to be Scorn instead. Kruuliks is not going to become invulnerable but he can teleport around the map which can be very annoying. He is also going to keep creating copies of himself so you will need to destroy them too in order to keep track of the real boss.

After a while, you will get a prompt for the Ether Harvesting on the screen. When this happens the boss is going to teleport to a destroyed Servitor. After a few moments, the Servitor will fire Dark Ether. Each of these can heal Kruuliks. So be sure to shoot the Dark Ether when you see it.

Apart from the healing mechanic, the fight is pretty straightforward. Just be sure to kill the copies quickly with headshots.

Destiny 2 Override Seasonal Activity Guide: How To Complete
May 17, 2021